Sacramento, California – Ram Khatiwoda was 10 when he and his family were forced off their land in Bhutan, carrying only a backpack with them to Nepal, where they would spend nearly 18 years living in a refugee camp, and working on local farms.

Now 35, with a young family of his own to support, Khatiwoda is training to be a farmer in California, part of a new programme designed to leverage the agricultural knowledge many refugees bring with them to the US, and bridge the gap of the nation’s ageing farming population.

“We are told they are going to train you,” he told Al Jazeera.

“They are going to find land, and they will make you independent. One day you can have your own farmland and your own business in the future. So that is a really brighter part.”

The aptly named New Roots programme is overseen by the International Rescue Committee (IRC) and is aimed for those who, like Khatiwoda, have vast agricultural knowledge, but lack the resources, and access to land, once they’ve resettled.

We need new generations to step forward and take over these farms, and refugees are definitely interested in doing that. The problem is, they don’t always have the resources.

Participants are provided the tools, land, and training in everything from crop planting to beekeeping to soil health to entrepreneurship.

Classes and farm tours are currently under way; groundbreaking and planting on the new farmland are scheduled for this summer.

“Something like 75 percent of local farmers are aged 65 or older, so in a couple years, we’re going to see this huge gap as farmers retire,” Dr Lisa Welze, the resettlement director for the IRC in Sacramento, said in an interview with Al Jazeera.

“We need new generations to step forward and take over these farms, and refugees are definitely interested in doing that. The problem is, they don’t always have the resources.”

Despite his background in agriculture, Khatiwoda found he had to learn about farming from the ground up.

“The seeding, and soil and the climate conditions are a little bit different from what we’re used to, but we take classes and we are doing a lot with farm tools and we are learning a lot,” Khatiwoda said of his class of six.

“Otherwise, we know how to work, we did it before, but we need to learn tractors and other things. And I’m very hungry to learn.”

Shawn Harrison, the founder and co-director of Soil Born Farms, which is teaching the classes, has been training immigrants and refugees in farming techniques for approximately 13 years.

He says that Sacramento is an ideal location for such a programme.

“Sacramento happens to be not only this great place to grow food, but it is also the primary resettlement zone for a lot of immigrant and refugee populations that tend to have these really rich agriculture backgrounds and culture,” Harrison told Al Jazeera.

“So it stands to reason that if you’re trying to preserve and expand agriculture, who better than to grow that food than the folks who have that experience?”

There are 15 New Roots farms across the US, all in urban areas with large refugee populations. Unlike sister sites in Dallas or Chicago, for instance, Sacramento, with its strategic location between the vineyards of Napa and the foodie haven of San Francisco, has long been one of the US’ most productive agricultural regions.

“That’s not a diverse farming population. We need to reach out to all the different sectors if you’re going to have people that grow high-quality foods, because, you know, there are less and less of those folks these days in this country.”

In addition to its rich agricultural history, and commitment to a roots-to-table philosophy (the city is dubbed “America’s Farm to Fork Capital”), the New Roots in Sacramento has the distinction of being the only chapter that was specifically requested by the community.

It’s a community that has committed to making fresh, healthy food available to everyone, through mobile farmers’ markets where low-income individuals can access fresh fruits and vegetables at no cost.

It has food literacy programmes that teach kids and their parents how to make healthier food choices on a budget; and established a free seed bank for anyone who wants to grow their own gardens.

But for all its accessibility, Sacramento is also known for its posh restaurants, some of which border on the precious.

Head chefs and owners at some of the city’s finest are offering significant fundraising support, and have committed to purchasing any produce raised by the new farmers, after the farmers’ families and local communities are fully supplied.

“We’re not, as restaurants, counting on them, or requiring them to provide to us in order to participate. We as restaurants are saying, we have a community of people that would love to buy this stuff.”

Harrison hopes the combination of training, tools, and guaranteed sales will create lasting opportunities for the future farmers. But after years of training his students, his optimism is cautious.

“A very small percentage of the businesses are evolving into something that they could live on, whereas they’re really building a business from A to Z, they’re expanding production, they’ve got good market share, they’re selling to a diversity of outlets, beyond just the corner farm stand,” he says.

“There needs to be more technical support on a variety of levels to help them build businesses that they can rely on as a sole means of source of income.”

Khatiwoda’s outlook is more hopeful; he simply wants to have something that he can pass to his children in the decades to come. “I hope they will do way better than me,” he says. 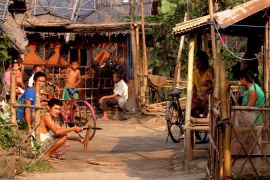 A two-part series follows ethnic Nepalese after they were expelled by Bhutan and found themselves stateless. 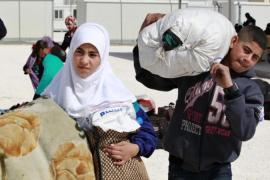 An Arabism cookbook: Helping refugees to help themselves

Refugees must be empowered to find their own solutions in order to avoid becoming another ‘lost generation’.