Palestinian novelist Susan Abulhawa explains what the Right of Return means to her.

Right of Return. Three words. In Arabic, Haq al Awda. They signify a principle of international law that states that those who leave their homes for whatever reason – whether vacation or escaping war – have a right to return to them. It is a self-evident truth; an elemental premise of justice. Simply, it is the way things (mostly) are and should always be.

For Palestinians, woven into and wrapped around these words are a nation’s dignity, a people’s narrative, the redemption of history and honour, and a contest between the moral prose of international law and the political expediency demanded by power, imperialism and supremacy.

They carry the weight of 59 refugee camps, memories of home and a million stories embedded into iron keys that open lost yellow, green and blue doors.

Our grandmothers locked those doors and carried the keys in the breast pockets of their embroidered caftans; and when they died – whether in refugee camps or fancy houses – before they could ever go home again, we became the keepers of those keys.

We’ve tucked them all, hundreds of thousands of keys, into the words Right of Return – words that pulse with the heartbeats of an estimated 11 million of us, 7.5 million of whom are registered refugees.

This essay is neither a history lesson nor a rehashing of the details of the last century’s greatest heist – the theft of Palestine. It is the corner of a curtain pulled slightly back from an endless condition of the human heart and the lessons none of us seem to learn. And, maybe, it is also a place of grace, no matter how painful; because, just as the fulfillment of the Right of Return is a journey’s end, so is it a space of unified beginnings. The epicentre of our greatest wound is our single point of oneness – with ourselves and with other violated peoples.

Like most dispossessed, disinherited Palestinians today, I was born after the Naqba and the Naksa, those boundless traumas of being robbed of home, heritage and history by another people who deemed themselves more entitled and worthy. In our case, it was European Jews.

My family was chased out of our Jerusalem homes, where the documented portion of our family roots is many centuries deep. They headed east, toward Gulf countries with recently discovered oil and no skilled or professional labour to support the development of those nations.

In Kuwait, where I was born, Palestinians designed and built the cities and roads and instituted their military. We created their schools and hospitals, then populated them with teachers and doctors. There are little to no institutions in Kuwait built by Kuwaitis. Palestinian refugees invested their talent and labour there in the hope of building a new life after we had to start over with nothing when Zionists came and pulled our land from under our feet.

For a time, we settled there, though we were never granted citizenship or full rights. We were always reminded – through racist laws, grossly inequitable pay structures and derogatory social attitudes – that we were, at best, guests. Mostly, however, we were (and are) regarded as either a charity lot – as long as we do what we’re told and keep our heads down – or a collective problem, if individual members dare to speak their minds or step out of line in any way.

And so, following the first Gulf War, Palestinians – who knew no other life than that in Kuwait – were kicked out and made refugees again. Yasser Arafat made a mistake. Some individual Palestinians didn’t behave as demanded. And that generation, like the previous one, had to start over with nothing somewhere else, again.

Having everything taken away, repeatedly, Palestinians placed great emphasis on education as a path to some dignity amidst homelessness and statelessness. We put a premium on education, the one thing we thought no one could take away. So, Lebanon established laws that banned Palestinians from a long list of professions, including medicine, law and engineering.

In Lebanon, Palestinians are allowed only a cramped, indecent life that precludes or curtails, by law, individual and collective aspirations. By law, the level of education we may attain and the reach of professional accomplishment we may achieve are capped, lest we surpass our status as a burden or charity.

Those of us who went West, did not have such explicit limits and created comfortable lives for ourselves and our children. Many of us did quite well. But it didn’t take long before we were reminded there, too, that we do not belong, nor were we necessarily welcome.

In the US, whether by targeting Palestinian charities (like the Holy Land Foundation) or Palestinian activists exercising their right to free speech (like Sami al-Arian or the Irvine 11 students), the limits of law and public discourse have been stretched to accommodate anti-Arab, and specifically anti-Palestinian, sentiments.

That doesn’t mean we are all targets here or that we are all outcasts. Assimilation, self-hate and rapacious orientation to capitalist ideals have served to protect some of us from external threats. Mostly, assimilation blankets the internal abyss formed in the vacancy where uprooted roots used to be.

Most of us, no matter how successful or comfortable, remain, as our beloved Edward Said was, Out of Place. There is always something missing. And in our national experience, on this vast planet, there has been no place for us to fully be, or to be whole.

The possibility of eviction, harassment or imprisonment sticks to our skin like cheap cologne wherever we go. And if we find a place of rest, it is usually far from family, far from the hues, smells and sounds of our culture.

But that isn’t the complete story. It isn’t even the most important reason why the Right of Return is a hallowed space that is personal, familial and national, for all of us, whether we live comfortably in Chile or France or in abject poverty in the Nahr el-Bared or Balata refugee camps.

I can pull words from personal and national scars to explain this, but I know they will not pass the barriers of practicality and concepts of expedient peace. Because if Palestinians would just give up the Right to Return, there would be peace – the Western version of it. If we could just accept that we’ve lost, and concentrate on building new lives, we could become new people, with new identities. Like Senegalese, Angolans, Congolese, and Gambians became African-Americans. Or how the Cherokee, Sioux, Apache, Iroquois, Navaho, Seminole, Cheyenne, and others, all became some miscellaneous category of Native Americans.

Their fates were born from holocausts of immensities still untold, and it is not okay to use other holocausts as precedents to steer the fate of Palestine.

Consider this imaginary analogy: that Germany never acknowledged what it did. It never apologised and instead insisted that European Jews look to the future because what happened is in the past; it remained arrogant and no one was ever held accountable; Jews had to build new lives on the mountains of their pain and in the vacancies of everything they lost.

If such trivialising of one people’s collective trauma smacks of a moral obscenity, why is it not so for another people’s collective trauma? Jews of the world shouted ‘Never Again’. Why does that vow not extend to the rest of humanity, specifically, to Palestinians? Why is it okay to demand less than justice for Palestinians, or worse, to discuss the merits of injustice?

I have said before that there is something humiliating in having to explain or prove our humanity to the world. But in the shade of what I have already laid out of the past, present and hypothetical analogy, the simple truth of our insistence on the Right of Return comes to this: we are human, worthy of human rights. We are an ancient society with a distinct identity, memories, stories, a rich heritage, and beautiful culture; not cattle that can be relocated to accommodate someone or something else.

For Palestinians to give up the Right of Return – even those who have no intention of ever returning – is to acknowledge that we are lesser beings; that kicking us out of our homes and ripping our hearts out was okay. It is to affirm that we do not deserve our own history and heritage; that it was okay for our proud parents and grandparents to wither in the ashes of their memories inside refugee camps unfit for animals.

We shouldn’t have to explain this. It ought to be obvious.

A vow to all humanity: ‘never again’

If the world refuses to understand what it means or why we hold it dear; if it is unwilling to recognise the terrible wrongs done to us or to stand with us as we demand acknowledgement, apology, restitution, and repatriation, then it should understand simply that we cannot and will not join them in subverting our lives, value and humanity. Because we are not children of a lesser god. And the homes our grandfathers and grandmothers built are not the inheritance of Europeans or Russians or Americans or Australians.

And while that might be a clear enough conclusion to this essay, it does not end there, because even victims have responsibilities to their own victimisation and to their own wounds. It is the responsibility of empathy; of making a ‘never again’ vow that applies to all of humanity; of taking a spiritual journey into our wounds on a path to solidarity with the wretched, violated and weak of our shared planet.

For me, a return home is not merely the redemption of my family’s history and our pain, nor merely the absolute requirement of acknowledgement and apology, but a radicalisation of thought that endeavours to always speak truth to power.

Susan Abulhawa is a novelist and political writer. Her debut novel, Mornings in Jenin (Bloomsbury 2010), was an international bestseller and translated into 33 languages. She has also published a poetry collection entitled My Voice Sought The Wind (JWB 2013). Albulhawa is the founder of Playgrounds for Palestine, a children’s NGO.

This essay first appeared in the November 2013 issue of the Al Jazeera Magazine. Download the magazine for iPads and iPhones here, and for Android devices here. 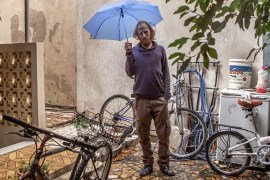 Israeli members of the BDS movement and pro-Palestinian activists explain why the world should stop supporting Israel. 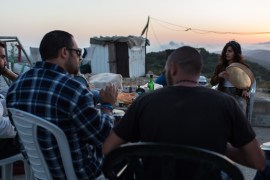 Palestinians in Israel camp for Right of Return

Palestinians whose ancestors were forcibly removed from home by Israeli troops camp outside villages waiting to return.