A Humvee is a great hulking vehicle with little in the way of creature comforts. Designed to face some of the toughest conditions on the planet, if you spend time in one it quickly lives up to its reputation.

The name comes from its military acronym “High Mobility Multipurpose Wheeled Vehicle,” which some wag in US military circles shortened to Humvee. The vehicle is ubiquitous in the wars in Afghanistan and Iraq where the US deployed it as its vehicle of choice, but now it has a role the US never envisaged; a weapon used by the Islamic State of Iraq and the Levant (ISIL) group.

Iraqi Prime Minister Haider al-Abbadi said some 2,300 Humvees have been stolen by ISIL from Mosul after it fell to ISIL a year ago. For a while the group celebrated the capture by parading them in their propaganda videos.

But Humvees need a lot of maintenance, a lot of fuel and require special parts from the US. For ISIL, the Toyota Land Cruiser was far easier to maintain and more effective. So it came up with a new way of using the vehicle.

Over the last few months ISIL has realised the true worth of the Humvee is not on the frontline, but as a bomb. There are several reasons for this. Firstly the Humvee, with its reinforced armour can easily repel small to medium arms fire, allowing ISIL to drive closely up to Iraq security forces. It’s also roomy enough to be packed with a lot of explosives. Finally, the vehicle is still used by Iraqi forces and so can easily be confused for a friendly vehicle at a distance.

ISIL has deployed the weapon to devastating effect against the Iraqis.

When Ramadi fell to ISIL nearly three weeks ago, ISIL used a combination of sleeper cells inside the city and Humvee car bombs to split Iraqi troops. That manoeuvre has encouraged ISIL to deploy the weapon in great numbers against the Iraqis and use other military vehicles that once belonged to their enemy.

On Tuesday, the group used a stolen tank packed with explosives to cause extensive casualties and damage to al-Muthanna airbase in Salahuddin province.

The repurposing of civilian cars by emptying the fuel tanks and packing them with explosives has been a feature of every armed rebellion and war the world over for the last 20 years. In 1982, in Lebanon, a truck bomb killed hundreds of US troops. Dealing with the threat in Iraq should now be a priority, but defending yourself against a suicide car bomb is a significant challenge.

Hisham al-Hisham, a military analyst who specialises in strategy in Iraq said the tactic was a game changer.

“The threat matrix has changed. Iraq security forces need to be much more aggressive in targeting the vehicles but that’s difficult because of the lack of reconnaissance and intelligence gathering capabilities available,” Hisham said.

In urban areas that means detecting car bombs before they explode. Using sniffer dogs, checkpoints and manual searches, however, can only go so far. ISIL has been bribing poor families into to parking explosive-laden cars in busy areas and remotely detonating the bombs.

Iraq’s biggest problem is that it’s nearly impossible to prevent a car bomb. If someone is determined to blow himself up, then that will happen. Air strikes are ineffective because without intelligence how do you know what to hit? Iraq needs a much larger troop presence, with wider perimeters around the areas they control. They also need more anti-tank weapons that can be deployed quickly when a wave of attacks starts. 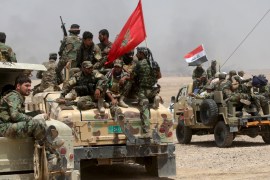 Reports of 55 killed after triple blasts hit convoys in Fallujah, as Iraqi offensive is under way to retake Ramadi. 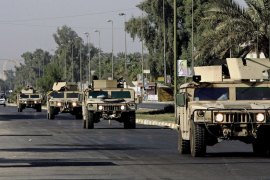