London, United Kingdom – Police have attempted to shut down a “festival for democracy” at an eco-village overlooking a site where dignitaries including the Queen gather on Monday for official events to commemorate the 800th anniversary of the signing of the Magna Carta.

The festival was planned by the residents of Runnymede Eco-Village, a community established three years ago in an area of neglected forest on the edge of London within a few hundred metres of the spot where the celebrated document – considered by many a symbol of civil liberties and the principle of equality under law – was signed in 1215.

Organisers and participants said the event, which included talks by academics and political activists as well as music and workshops, was a necessary alternative to the official programme that included a river pageant along the Thames, and the erection of a four-metre bronze statue of Queen Elizabeth II, the UK’s hereditary head of state.

“There has been a bonfire of the liberties in the past 10 years. We have seen the removal of so many of our rights to gather, our rights to protest, our rights of free speech and the right to a fair trial,” Peter Phoenix, a Runnymede resident and a campaigner for land rights and the environment, told Al Jazeera.

“Our rights have been suppressed during the war on terror and we want some redress. Magna Carta was the beginning of it all, but now we need a new charter of liberties.”

Maria Sanders, an Occupy Democracy activist, said that erecting a statue of the Queen to commemorate a document celebrated for curbing monarchical power was “hypocrisy”.

“Part of the reason for having the festival is to make the point that the fight that started 800 years ago isn’t finished. People still have to keep fighting for democracy because we don’t have it, though we’ve made a lot of gains,” Sanders told Al Jazeera.

Police on Friday blocked entrances to the village, which is located on former university-owned land sold to a property developer in 2007, and prevented non-residents from getting onto the site. Al Jazeera saw musicians and people carrying catering equipment being denied access, while footage posted online showed a video journalist being arrested after failing to leave the area when told to do so by police.

A spokesperson for Surrey Police told Al Jazeera that action was being taken to prevent an illegal rave, and said officers would actively turn away those planning to attend.

“We are sympathetic to those that wanted a more quiet and peaceful event, but this has been hijacked by a group who wished to organise an occasion which by definition constitutes a rave – a gathering of individuals over several days – where throughout that period amplified music will be played. There is concern for public safety and community disruption,” the spokesperson said.

Organisers denied the event constituted a rave, describing it as “democratic discussions with a bit of music”. The event’s programme advertised live music and “various DJs until 3am” on Sunday morning, but organisers said they had offered to turn off the music by 11pm.

Phoenix said the festival had been subjected to an excessive clampdown, but added speakers and other people were still managing to get in.

“We have the right to protest and gather and to have our opinions. The state may not like it but this is a celebration of the Magna Carta in its truest sense, in the spirit of the rights of the individual against the government, and they should be allowing it to go ahead rather than suppressing it,” he said.

Occupants of the eco-village, who currently number about 30 permanent residents and others more loosely affiliated to the camp, are also facing a legal fight to remain on the site after Orchid Runnymede, the owners of the land, began court proceedings to evict them earlier this year, with their latest court date coinciding with Monday’s Magna Carta anniversary.

They say they have the right to live on the land under English common law, and cite the Charter of the Forests, a companion document to the Magna Carta passed in 1217 that granted ordinary people rights of access to woodlands, as well as more recent European human rights laws.

They also describe themselves as “Diggers” and claim to be inspired by the group of the same name who occupied common land amid the social unrest that followed the English Civil War of the 1640s.

“We are not doing anything illegal here. By English law we are allowed to use disused land and unmanaged piece of forest which is what this is,” Ieuan Davies, one of the original residents, told Al Jazeera.

He said about half of those currently living at the site had nowhere else to go and would otherwise be homeless.

Davies, 50, and the other founders are veterans of the Occupy London movement, which set up camp outside St Paul’s Cathedral in 2011 as part of global anti-capitalism protests, who were eventually evicted from central London in June 2012.

At that point, Davies said, about 70 people had marched to their current location southwest of the city, followed all the way by police, who issued them with an injunction en route to stay off nearby Windsor Great Park, a 2,020-hectare former hunting forest still owned by the monarchy.

Since then, those who stayed and subsequently joined them have built a number of idiosyncratic and imaginative structures on the steep wooded hillside including solar-powered teepees, an Anglo-Saxon long house, wooden huts and other improvised dwellings.

A natural spring provides water while many residents collect food discarded by nearby supermarkets. They say they have tidied up and restored an area of woodland that had been used for fly-tipping and neglected for decades, and are providing shelter and support for people with nowhere else to go.

Signs around the site read “Be warned. We live as free men and women!” and “We just want to make friends and grow vegetables.”

“The main message we wanted to get across was to use disused land, and only disused land, to grow food and create low impact off-grid homes. We need to rethink the system. It is not sustainable what we’re doing. Why are we shipping in food from Australia and New Zealand when you can grow it in your back garden?” said Phoenix.

Vinny, a 48-year-old resident since 2012, said he had once run his own window-cleaning company but had quit work, disillusioned at the age of 30, and spent the subsequent years travelling the world and living with indigenous tribes.

“In Laos or Burma you see people with absolutely nothing and I used to say when I come back to England if I have a fiver [$7.80] a day I can buy my McDonald’s and I’m being fed. Now I’ve become so empowered that I don’t even need money to live,” he told Al Jazeera.

Luke Willard moved onto the site after spending time living in a traveller community and previously studying forestry.

“It’s a really nice vibe and I was welcomed with open arms. I came with a lot of knowledge about trees so I could come in and start teaching people stuff,” he told Al Jazeera. “It’s a beautiful forest. There is definitely a lot of potential.”

Although the eco-villagers still hope to win the right to stay, they concede that their future is uncertain. Some plan to relocate to Portugal to launch a similar initiative on purchased land there, while others hope sympathetic landowners will come forward to offer them land to continue to develop sustainable models of living.

In a statement issued earlier this year, Orchid Runnymede, the landowner, said the residents were squatters who were occupying the land illegally and should leave peacefully. It said it had no choice but to seek their eviction because the area was about to become a live construction site.

Its plans for the site include building affordable housing and accommodation for students and the elderly, as well as a private estate called Magna Carta Park offering “an aspiration address” and “grand living beside the River Thames”.

Local residents do not seem to have had any major issues with the villagers. A spokesperson for Runnymede Borough Council said it had not received any complaints, although a man on a bicycle shouted: “Have you closed the hippy camp?” at police blocking access to the site as he rode past on Friday.

But another man looking on, who did not want to give his name, said: “Everybody’s been as good as gold. So long as they are no trouble then good luck to them. We’ve all got to live on this planet.” 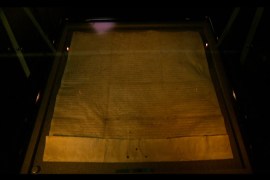 One of four surviving versions of 800-year-old founding document of western law displayed in cathedral near London. 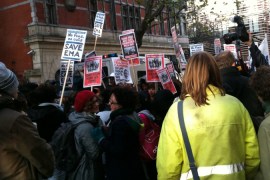 Heavy police presence as thousands take to the streets in protests against government plans to raise university fees.