For over a year the Islamic State of Iraq and the Levant (ISIL) has dominated the Iraqi landscape. With territory across Iraq, it’s pushed further into Anbar province and consolidated its gains in Mosul. For over a year I’ve covered its movements and followed the twists and turns and the tragic death and destruction the group’s occupation has brought with it.

In Syria, it’s proved a formidable foe and also seemingly immune to actions from other rebel groups, President Bashar al-Assad’s regime and US led coalition airstrikes.

ISIL has also dominated the social media space and has hundreds of Twitter and Facebook accounts pumping out its propaganda 24 hours a day in multiple languages.

It’s the best resourced and most violent group in the entire region. And it acts like a nation state. For those reasons it has won the war it set out to fight. But more crucially it has cemented its ideological thinking within its own ranks. ISIL fighters and supporters unthinkingly follow the group and no dissent is tolerated.

Its military tactics are at a level previously unheard of for an armed group of this nature. Individually, members of ISIL have 14 years of fighting experience in Afghanistan, Iraq, Pakistan, Libya, Yemen, Mali and Syria under their belt. Fighters that have defected from those groups have come to join ISIL and passed that knowledge to new and driven recruits.

The use of suicide car bombs and guerrilla tactics have decimated the forces allied against them. For over a year now, ISIL has proved that it can fight and they are willing to die for that fight. But it doesn’t end at that.

In the territory they control, the rule using a mix of fear and soft power. Fear through the use of intimidation and religious policing. Soft power through providing basic services such as electricity and albeit oppressive security.

ISIL has won if the standard is being able to impose brutal rule and hold territory. ISIL certainly thinks it has won. It hasn’t won in the most crucial of ways. It hasn’t been widely recognised as a state by Muslim countries or other rebel groups with which it might otherwise share similar goals. It doesn’t have the kind of legitimacy it so obviously craves. And therein lies an opportunity for ISIL to be defeated not just militarily but ideologically as well.

By fighting on the military and ideology fronts the international community allied against ISIL can deal them a fatal blow. Having spoken to many supporters of ISIL as well as a limited number of fighters over the last year what strikes you is the distinct lack of religion. Many of the younger fighters, particularly from non-Muslim countries lack an understanding of the basics of the religion. For them the fight is political – an opportunity to change the narrative from American occupation and American backed dictators in Muslim lands to ISIL occupation of Muslim lands. Political views, however, can be changed if real engagement with the Middle East and an understanding of the fault lines begins to dominate the debate rather than the rhetoric of “them and us” which pits ISIL against the West.

I’ve been told time and time again here in Iraq and elsewhere that for ISIL to be defeated you need a solution in Syria which is increasingly one without Assad as president, uniting all of the Syrian nationalists rebel groups and persuading more extreme groups like the Nusra Front that engagement with the other Syrian groups is crucial and that the path to peace begins there.

Also In Iraq I’ve been told that empowering the Sunni groups and engaging politically with those who have pledged allegiance to ISIL is also crucial. But that means a process of reconciliation, which has never been a strong point of wars fought in the Arab world.

However, things are slowly changing. ISIL is overstretched. Iraq has won military victories against it in some territory, and the use of Shia militias has been controversial, but undeniably effective. Tikrit and Jarf al-Sakhar are good examples of ISIL’s defeat by the Iraqis.

But in Iraq and Syria the group remains. Iranian and Russian support has been and remains strong for Assad, but even there both countries understand what a losing cause looks like. After four years how much is blind support of Assad worth to them? You can bet that both countries have had that conversation.

After a year of covering intensively the ISIL conflict here in Iraq these are just ideas that that have been floated by many I’ve spoken to. They might seem like obvious ideas but they’ve not been adopted in either Baghdad or Washington. Instead, it’s been a slow, reluctant slide into fighting the group with disjointed policies that ISIL have exploited. They know that the policy for Syria is different to that in Iraq. 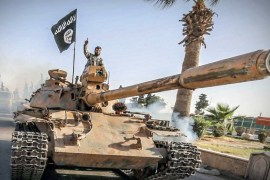 The armed group’s control of Syria reportedly expands, following the latest gains in Homs and Aleppo. 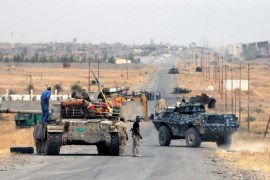