Havana, Cuba – Those standing in line grow increasingly impatient, checking watches and phones as the beefy security guard at the top of the narrow stairway takes his time choosing who gets in next.

It’s minutes before 7pm closing time on a warm Friday near the Malecón esplanade at a sales office of Etecsa, Cuba’s state-owned telecommunications company. Those anxiously waiting outside don’t want to be without the internet over the weekend.

It is here where Wi-Fi scratch cards are sold – $4.50 for one hour – a hefty price for internet that may or may not work. Those with deep pockets head to high-end Havana hotels and pay anywhere from $10 to $14 per hour – an astronomical fee considering the average Cuban earns just $20 a month.

As Cuba opens up to its Cold War nemesis 145km across the Atlantic, American tourists flooding in for the first time are greeted with a rude reception by the notoriously unpredictable, painfully slow, and prohibitively expensive internet service.

Cuba has one of the lowest connectivity rates in the Western Hemisphere with just 3.4 percent of households online, according to the International Telecommunications Union, citing the latest data from 2013.

But relations between the Cold War foes continue to warm – as witnessed on Friday by Cuba’s removal from the US list of state sponsors of terrorism – and for those yearning for greater internet access, the normalisation of ties since December 17, 2014 offers a megabyte of hope.

At the country’s first public internet café launched by artist Alexis “Kcho” Leyva in Havana, two dozen mostly young Cubans sit outside in white wicker chairs or on benches in the nondescript courtyard surrounded by grey concrete walls in the hot midday sun, some on tablets others on phones and laptops.

Down a row with his head buried in a notebook sits Jimmy Rao. The 31-year-old auto mechanic said he’s only recently started using the internet and still “playing around” with what it offers.

“I’m just learning this, there are so many things available,” said Rao. “It is a great source of information that helps me with my job, but it is also a great way to communicate with my cousin in the United States.”

As for Cuba’s first Wi-Fi hotspot open to all 24/7, Rao said it has its good and bad points. Because it’s free, he saves the $3 he’d normally have to pay to email a photo at other internet shops. The downside, however, is with so many users taking advantage – some even spend the night here – the bandwidth speed is torturously slow.

Brenda Yera, 20, sits by herself working her Samsung device. She usually accesses the internet only at work, she told Al Jazeera, but she recently heard about this place and decided to check it out.

“I think this is a great place to use the internet – and it’s free,” said the tall and thin woman with long dark hair.

Yera looked pleased when told the government plans to have the web available in 50 percent of Cuban households over the next five years. “That would be great, it’s very important for people to have the internet,” said Yera.

Cuba effectively has two internets – one closely controlled by the communist government – and the other with unrestricted access that’s familiar to most of the world. The country uses satellite hook-ups and an undersea fibre optic cable from Venezuela for its internet.

Without the US trade embargo imposed in 1961, Cuban officials say, plugging into Atlantic undersea cables could provide the Caribbean island with easily accessible, high-speed internet.

But Sanjay Tatic Kelly, project director for Freedom House’s Freedom on the Net division, told Al Jazeera the Cuban government has long been wary of granting unfettered online access to the Cuban people.

“The thaw in relations certainly offers a great deal of potential. How quickly the internet spreads across the island, however, will ultimately depend more on the political will of the Cuban government, and less on American lawmakers and companies,” said Kelly.

While the Cuban government says about 26 percent of Cubans access the internet now, Kelly noted most can only use the tightly controlled government intranet, which offers a national email system, pro-government blogs, and educational sources.

Only about 5 percent of Cubans actually have access to the unrestricted web.

“The Cuban government will likely focus only on enabling more people to connect to the heavily censored national network and not the internet as we know it,” Kelly said. “Unless the government’s attitude changes dramatically, it is highly unlikely that they will allow widespread and unrestricted access to the international network.”

Yet Cubans remain hopeful their lives online will improve with warming US-Cuba relations.

IT professional Maikel de la Vega works at a hotel in Playa Girón, 210km southeast of the capital Havana. “One of the first talks between the US and Cuba was on telecommunications,” he noted.

Asked if he thinks Cuba will soon have internet access like much of the world, he said it all depends on negotiations between Havana and Washington.

“It’s a process. It’s impossible at this point to know how the story will end.” 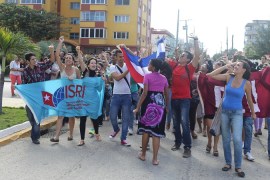 US to launch historic talks with Cuba

High level talks this week aim to result in lifting of travel restrictions on diplomats and reopening of embassies. 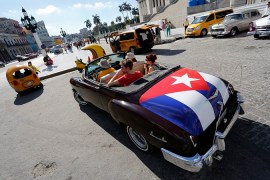