Barcelona, Spain – In May 2011 with an economic crisis engulfing Spain, protesters set up encampments in plazas all across the country demanding, as they said, “real democracy now”, in opposition to politicians “who don’t represent us” and the “dictatorship of the markets”.

Four years later, on an overcast evening, one of those activists Gala Pin stood on stage in Barcelona’s central square and told a several thousand-strong crowd that at the time of those encampments, “we could never have imagined we were at the beginning of a process to reclaim democracy”.

Nor did she imagine, Pin said, that she and many of her fellow activists would be returning to Placa Catalunya for a rally as candidates of a political party that, after local elections on Sunday, could be running the city of Barcelona.

The party, Barcelona en Comú (Barcelona in Common), which was started less than a year ago, is a coalition of social activists who have never held political office. They are fielding “citizen candidates” to run on a radical platform to fight corruption and austerity, and last week they were leading the polls in Barcelona by a slim margin.

This is not leftist politics as usual, however, but a deliberate strategy of what campaigners call “municipalismo”, or municipalism. It is an attempt, they say, to radically democratise local politics by making government institutions responsive and accountable to citizen participation.

They are using crowdsourced manifestos, neighbourhood assemblies, and networked online voting in which anyone can take part, in order to decide policy priorities and build electoral platforms. The strategy from Barcelona is being reproduced across Spain.

Barcelona en Comú’s candidate for mayor, Ada Colau, 41, has said participation is not “a top-down concession but a way to rule”. She told the crowd in Placa Catalunya at the campaign’s final rally that she would “lead by obeying your orders”.

With numerous figures from both traditional major parties in Spain embroiled in corruption scandals, there has been a collapse of public trust for conventional politicians. This crisis of political legitimacy is exacerbated by the second highest unemployment rate in Europe, low wages, and anger against cuts to social welfare. As a result the country’s bipartisan system is being eroded, in many different directions.

This is the context in which Barcelona en Comú and sister coalitions are contesting Sunday’s municipal elections in towns and cities across the country, from Galicia to the Canary Islands. They are polling best in Spain’s two largest cities, Madrid and Barcelona. In many cases allied with anti-austerity party Podemos, and using crowdsourced electoral platforms, social activists are running for office under names such as Ahora Madrid (Madrid Now) and Zaragoza en Comun (Zaragoza in Common).

Javier Toret, the developer of Barcelona en Comú’s online participation platforms, said he is influenced by theorists such as Michel Bauwens, who is working in the field of peer-to-peer technology to create new forms of democracy.

Bauwens told Al Jazeera given historical problems with monolithic political parties on the one hand, and problems with direct democratic assemblies on the other, “the most realistic option is to combine electoral democracy with new forms of deliberative and participative democracy”.

With new technology it is now easier and cheaper than ever before for citizens to vote on almost any issue in the running of their cities. Toret was particularly inspired by web tools from Reykjavik in Iceland, where users proposed and debated policies online, took budgetary decisions, and voted on neighbourhood issues.

Using a similar model, 1,000 people took part online in the creation of Barcelona en Comú’s ethical code. Aimed at increasing transparency and avoiding corruption, the code limits wages to 26,400 euros ($29,000) a year for all party officials – thereby slashing the mayor’s salary by more than 100,000 euros ($110,100) – and commits them to full transparency, including publishing all meetings and income sources, and to “promote and support all citizen initiatives”.

Policy proposals for Barcelona en Comú were developed both on and offline via a network of neighbourhood assemblies. Some ran consultations using physical maps of the city on which participants could mark the key issues affecting them. In total, people contributed 1,600 proposals towards an electoral platform, and using online tools, discussed and then prioritised them by popular vote.

Preventing evictions is at the top of both Barcelona en Comú and Ahora Madrid’s electoral lists. Mayoral candidate Ada Colau is a founder of the Mortgage Victims’ Platform (or PAH), one of Spain’s strongest social movements, created in the wake of the economic crisis to resist a wave of housing evictions. There are 20 such evictions a day in Barcelona alone.

In her former role as spokesperson for the PAH, Colau became a household name when she called the head of the Spanish Banking Association a criminal in a televised hearing in the national parliament.

Meanwhile, in the Spanish capital, the candidate for Ahora Madrid, Manuela Carmena, 71, a former judge with a record of defending human and labour rights, has come out of nowhere to pose a serious challenge to the Partido Popular’s Esperanza Aguirre.

Ahora Madrid has a budget of 200,000 euros ($220,200) for the election, in which Partido Popular, which has held the capital’s administration for 20 years, is spending 20 million euros ($22m). Recent opinion polls show Carmena taking second place to Aguirre with a margin of just two seats.

Carmena recently told a Spanish newspaper that “politics must not be spectacular”. Instead, it “should be about managing social improvements that raise individual happiness. For this, the town hall is the best place”. Town-hall politics, however, is not a low stakes game; Ahora Madrid’s proposals for participatory budgeting and citizen decision-making could well reverse privatisation in the city outright.

There are other implications for anti-austerity politics too. If Colau and Carmena’s mayoral campaigns are successful, their ally Podemos, whose strong showing in polls last year recently flagged, could see increased support in the run-up to Spain’s national elections at the end of 2015.

Yet, even if they don’t win Barcelona or Madrid, adherents of municipalismo look set to form the main opposition, inserting a large number of radicals committed to participatory politics into these cities’ institutions.

Undoubtedly, any attempt to take on state structures such as this will be messy, difficult, and controversial. But it seems likely their presence will make it hard for other politicians to resist calls for a more open, participatory democratic style.

And if they do win, the “citizen candidates” are looking to have an impact well beyond city borders.

“I want to make Barcelona a democratic reference for the world,” Ada Colau said at the rally in Placa Catalunya. 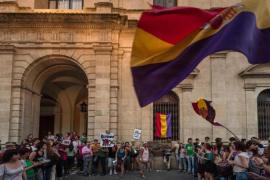 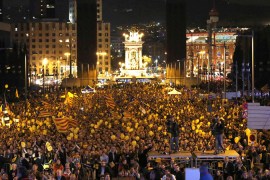 Catalans expected to turn out in droves on Sunday for what is now a ‘symbolic’ independence referendum.