The pictures show a scene of utter devastation.

In this case a picture does speak a thousand words. Or in my case a news report.

Yet while people in the capital seem to sleep outdoors during the night time – there is a reason.

For many their homes are standing but have issues, be it broken windows, failed foundations or major supporting beams having collapsed.

In many cases the large majority of the destruction in the urban areas is of the historic areas of the city.

Kathmandu may be a place that is easy to photograph or film and the world only has these images to go by.

Al Jazeera is getting through the dirt and dust and our teams are now telling the story of death and survival from within urban areas and beyond.

The first week has been an eye opener. Every time I walk past a local in the capital they just looked shell-shocked, rushing in one way or the other to find food or fuel.

They do not want to even look up at the buildings that are destroyed just in case they come crashing down on them again. They are scared and weary of any jolt or aftershock and there have been many.

Even I was woken up a few times during this first week.

We have spent the better part of our time filing stories in the capital, getting the images out from here until we can reach out further into the earthquake zone.

I have spent a lot of time near Dharahara Tower, built over 190 years ago. We have been broadcasting from there periodically. It toppled over without a thought for the dozens of people that had been scaling the stairs inside or those walking outside its periphery.

Their bodies have been quickly recovered.

During the last few days I have seen one group of dignitaries after another visit the location to witness the destruction or wonder how it will ever be built again.

On Friday and Saturday, bulldozers were clearing the brick and mortar away. The debris from each historic site will be taken to a secure location and then the experts will sift through, look for the nations’ treasures and try to rebuild.

Rebuilding a monument might be a lot easier than rebuilding a nation and a people totally broken, psychologically damaged by what they have seen and experienced. 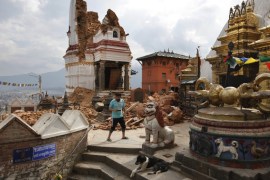 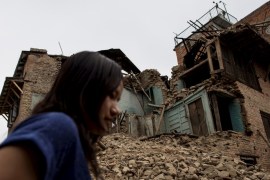 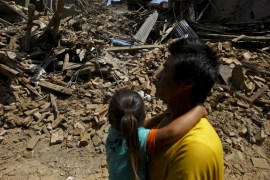