London, United Kingdom – Democracy campaigners and victims and opponents of austerity policies are planning a wave of protest occupations and direct action amid widespread anger at the return to power of the country’s right-wing Conservative Party, warning the UK is on its “last legs”.

The Conservatives, led by David Cameron, the prime minister since 2010, claimed an unexpected victory in national elections earlier in the month by winning a small parliamentary majority despite gaining the support of less than a quarter of eligible voters, and just 37 percent of votes actually cast.

That result triggered immediate anger on the streets with police clashing with protesters who converged on Downing Street, the prime minister’s London residence, carrying signs reading “I pledge to resist!” and “Stop the cuts!” – a reference to the Conservatives’ unpopular neoliberal austerity policies.

Some who attended the demonstration accused police of using violent tactics and of keeping peaceful protesters and even tourists caught up in the melee “kettled” for several hours.

“I have never experienced such extreme force of police violence,” said Daphne Wikken, a student. “My legs are bruised everywhere and I cut my arm. For me what is particularly scary is the fact that the government is already cracking down on dissent so badly just days after the general election.”

Police said four officers and another member of police staff were injured and 15 people arrested.

The result of the election was further complicated by a landslide in Scotland for the Scottish Nationalist Party, which won all but three of the country’s 59 seats to become the third-largest party in the British Parliament, a separate institution to the Scottish Parliament which the SNP already controlled.

With the SNP committed to opposing austerity policies and riding a wave of popular support since Scots narrowly rejected independence in a referendum last year, some constitutional experts have questioned whether the UK can survive in its current form with two of its constituent nations pulling in radically different directions.

“We have a constitutional crisis in this country. This country is on its last legs,” Anthony Barnett, the founder of the OpenDemocracy website, told an Occupy Democracy meeting outside parliament one day after the Downing Street protest. “We’ve already got a Scottish parliament which is like a revolutionary torpedo under the current order. Everybody knows this order cannot continue.”

Barnett said the UK needed a people-led constitutional convention to update an archaic and largely undemocratic political system and to address its internal political contradictions.

“This election produced a decisive result but it did not produce a fair one,” he told Al Jazeera. “But there were more meetings and more hustings [political campaigning] during this election than I have ever known. There was a sense that we want to talk about how this place is run. That is quite new and quite exciting and it is happening at an organic level.”

Activist groups are already organising to oppose the government amid fears the Conservatives will push through widely unpopular and controversial plans to further privatise the National Health Service (NHS), and impose deep cuts to already squeezed public services and welfare budgets.

“We will see more economic pain. We are in for an extremely rocky ride. Inequality can only get very much worse. Most middle income households have virtually no savings to fall back on now,” John Christensen, director of the Tax Justice Network, told Al Jazeera.

Hundreds of people gathered in a lecture theatre at a London university last week for a meeting styled as a “Radical Left General Assembly” to discuss plans for the creation of a national resistance network committed to “mass action from below”.

Further protests in London have been called for May 27, the date of the official opening of the new parliament, as well as on June 20 when anti-austerity campaigners have called for a demonstration “bigger and bolder than we have ever done before” outside the Bank of England.

Rallies, events and other actions are also taking place in cities and towns across the country.

In Liverpool, activists who last month occupied an empty bank building and turned it into a homeless shelter said in a message of solidarity to Occupy groups that direct action was now the only way to challenge the political system.

“We continue to build a solidarity network of the disenfranchised, the homeless and all people who stand against a political system that has failed us,” said the group, part of a network calling themselves Love Activists. “Direct action is the only way now to challenge the political system and we will occupy building after building.”

The occupation was ended April 12 by police who entered the building and evicted those inside by force, arresting five people.

Standing in Parliament Square at an Occupy-organised “Festival of Democracy” a few days earlier, Phoenix Rainbow, an eco-activist and housing campaigner, predicted a “massive wave of protest” to come.

“There is already a mass movement of people that want to change our unfair, undemocratic and unsustainable system. Our democracy is a broken shambles,” he told Al Jazeera.

“What you are going to see over the next few years is a mass mobilisation of people who want change and the power moving back to the street. Most people in Britain have had enough and this is just the beginning.”

Looking further ahead, some activists are already thinking about what the future symbols of a post-United Kingdom English democratic state might look like.

With the Houses of Parliament and the clock tower of Big Ben behind him, Steve Freeman, an unsuccessful candidate in the election for the Republican Socialist Party, unfurled a tricolour flag in red, purple and green.

He explained the colours represented the Levellers, a 17th-century English revolutionary movement; the Chartists, who campaigned for mass democratic rights in the 19th century; and the Suffragettes, the women’s suffrage movement of the early 20th century.

“The flag of St George is a right-wing flag and a royalist flag, and we say we need an alternative progressive flag,” Freeman told Al Jazeera. “The tricolour is a republican flag and this is a flag for a new democracy drawing on our democratic traditions. It is the people’s flag.” 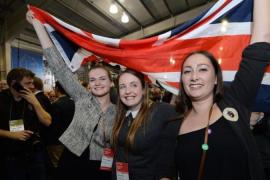 Is Britain only for the rich? 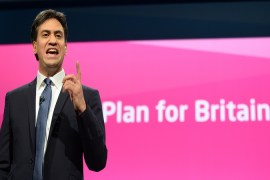