Guadalajara, Mexico – Life can be tough and bitterly unfair for women in Mexico with one killed every four hours and only a small proportion of those responsible ever being convicted.

Maria Guadalupe Leon Hurtado doesn’t want her daughter to become the next grim statistic. Leon, a mother of eight who used to suffer domestic abuse, sits in the waiting room at the Women’s Justice Centre in Guadalajara, Mexico’s second-biggest city.

With a pained expression, Leon told Al Jazeera she’s there to support her daughter, who is being physically abused by her partner.

Since its inauguration in February, the centre has been flooded by victims of gender-based violence. In its first two weeks, it received 675 women who had the courage to denounce all manner of physical and emotional abuse and seek help.

“The most common complaints are of domestic violence, rape and sexual harassment,” Zulema Carrio, the director of the centre, told Al Jazeera.

The majority of victims are women of low economic status, she said.

Wait until he kills her?

The newest of 17 such centres in Mexico, it houses 11 government bodies – including the health, justice, education, labour, criminal investigation, and forensics departments – all tasked with bringing justice and providing women with therapy and legal counsel.

The soothing lilac walls of the waiting room jar with the hurt on display, as one woman in a neck brace winces, while another struggles to control her restless kids.

Anxiously awaiting the reappearance of her daughter – who asked not to be named for fear of reprisal – Leon revealed previous experiences with the authorities had not been satisfactory.

“Ten years ago I filed complaints because my ex-husband beat me and anally raped me, but the authorities ignored me,” she said.

“Now my daughter is going through the same thing. She’s 26 years old and has two children. Her partner has beaten her three times. We took her to a medical centre and they said there were no grounds for legal action [because her wounds were not deemed sufficiently grave]. What do we have to do, wait until he kills her?”

I filed complaints because my ex-husband beat me and anally raped me but the authorities ignored me.

Beyond domestic abuse, women are also at risk of being abducted, raped, mutilated, killed or forced into sexual slavery by drug gangs that often prey upon the vulnerable, and attack the female activists and citizen journalists who dare to denounce them.

According to a 2014 study by the National Citizen Femicide Observatory, an alliance of 49 organisations that documents gender violence, 3,892 women were killed in Mexico in 2012 and 2013 – equivalent to more than five murders a day.

This context has led to much discussion of femicide, a term feminist scholar Diana Russell defines as “murder of women by men motivated by hatred, contempt, pleasure, or a sense of ownership of women”.

A recent reform established femicide as a distinct crime from homicide, punishable by 40 to 70 years’ imprisonment. Yet, this has done little to protect women or enhance conviction rates.

The Femicide Observatory found only 16 percent of female homicides in 2012 and 2013 were classified as femicides. Of these, just 1.6 percent resulted in convictions.

One of the victims during this period was Imelda Virgen, a 41-year-old child psychiatrist with bold features, curly chestnut hair, and a passion for yoga, painting, and theatre.

Shortly after leaving work at the University of Guadalajara the night of September 28, 2012, Virgen was attacked by two men who raped her and then beat her to death with a rock.

The alleged culprits were later arrested, along with Virgen’s estranged husband of eight years, Gilberto Vazquez Cortes, who witnessed the killing. He initially admitted hiring the pair to kill her in a fit of jealousy, although he later retracted his confession, claiming police forced him into signing it.

More than two-and-a-half years later, there’s still no date for the trial.

“The legal process is very slow in Mexico,” Imelda’s sister, Sofia Virgen, told Al Jazeera. “It’s been very tough but we still have hope [that justice will be done]. That’s all we have left.”

Wearing T-shirts emblazoned with “Justice for Imelda, justice for all women,” three generations of the Virgen family joined several hundred feminist demonstrators beneath the blistering sun to lead a march through Guadalajara recently.

The family, who led chants of “Not one more femicide!” remain affronted that Imelda’s killing has not been classified as a femicide.

“Recognising it as such would represent progress towards accepting that gender violence is a real problem,” Sofia said.

Esteban Contreras, a journalist who co-directed “Silencia”, a moving 30-minute documentary about the case, told Al Jazeera that gender violence is a symptom of the “patriarchal nature of public policy in Mexico”.

Few femicides are recognised precisely because “the authorities want to minimise the problem”, he said.

Mexico’s Special Prosecutor’s Office for Crimes against Women declined repeated invitations to address such allegations, although its director, Nelly Montealegre Diaz, did admit that not one femicide case was prosecuted last year.

In a sign of progress, Mexico’s Supreme Court ruled on March 25, that authorities must now investigate every female murder from a gender perspective to determine whether it counts as a femicide.

Still, many women are discouraged from reporting crimes by the culture of impunity and victim-blaming in Mexico’s “corrupt and broken system”, human rights activist Angelika Albaladejo told Al Jazeera.

Others remain silent for fear of retribution by the original perpetrator or corrupt security forces, she said.

Carrio, the director of the Women’s Justice Centre, admitted there is a problem of “institutional victimisation” in Mexico.

“The causes of violence against women in Mexico include cultural attitudes and socially constructed gender roles ingrained in generation after generation,” she said.

“I think we need a joint effort between society and the authorities to denounce gender violence in order to really make an impact.”

Yet Albaladejo said it is too simplistic to blame traditional gender roles for the current situation.

“Machismo is a big part of it, but when you have a situation where there’s corruption and impunity and people can get away with any kind of crime, it’s just bound to happen.”

Having studied gender violence across Latin America, Albaladejo noted some signs of progress.

“One of the things that seems to be helping is engaging the community more, bolstering feminist organisations that are working to at least keep tabs on the numbers, hold the government accountable, and push for justice.”

While Mexico may be taking baby steps in the right direction, Leon still doubts there is sufficient political will to truly make a difference.

“Machismo has not been eradicated here, even among those who govern us,” she said. “It’s hard to make them pay attention to women.” 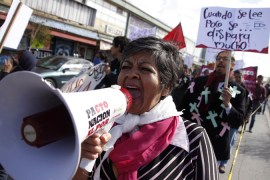 Mexico arrests many over slaying of 11 women

Twelve suspects, among them drug dealers and pimps, held over killings and forced prostitution in Ciudad Juarez. 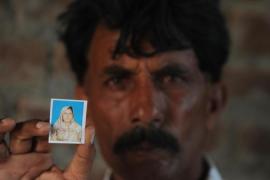 Want to end sexual violence against women? Fix the men 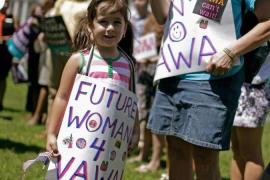 Violence Against Women Act and the US Catholic bishops

Bishops are attacking a major social justice document that does not even threaten the values they are trying to uphold. 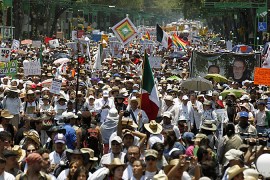 Angry Mexicans march on capital to protest against wave of killings that has claimed 38,000 lives since 2006.