“Stand here!” I shouted as I pulled my colleague under the door frame with me.

The building shook and a woman started crying loudly out of fear into the arms of a co-worker, who was trying to reassure her everything would be fine.

Even I didn’t believe him.

Standing under the frame was the one thing that popped into my mind – a clip from a film I saw in primary school on what to do during an earthquake.

The timing couldn’t have been better, as we stood on the fifth floor, waiting for the shaking to stop.

This was the first large aftershock I’ve experience firsthand.

Some tell me it lasted less than a minute. Others say less than two minutes. I don’t know.

But when it seemed like it wouldn’t stop is when I began to worry.

It was a taste of what people in Nepal experienced during April’s devastating earthquake.

Once we went down the stairs, joining the crowds that had flooded onto the streets, I got a sense of the fear that was sweeping over people.

Durbar Square, a UNESCO heritage site where locals and journalists camped out after April’s quake, is still home to dozens of locals, who have got used to the fear.

Chanchal Garg and his cousin returned home recently, but are now back in the square. They were working in their store when the aftershock hit.

“It was shaking,” he said, illustrating with his hand, “like this. And everyone starting running, everyone left from there. Everyone went to an open area.”

Standing among the tents for the second time in less than three weeks, he says he’s had enough of this, and Nepal.

“This place is dangerous, there’s no limit. It’s worth just leaving here.”

Many people here share that feeling. Including Rambabu Rai, who is sitting in a park nearby.

He ran out of his home, and straight to the open space.

“I don’t think this is a safe place. Because it hits again and again.

“When the number of quakes start going down and then a big one like this hits, people become scared in their minds. Meaning they’re completely afraid.

“They don’t know how they’ll live, eat, work. Going into a building, you don’t know what will happen.”

Several kilometres away, at Kathmandu’s teaching hospital, the parking lot is once again filled with patients.

These are just some of the nearly one hundred that have come to this hospital alone, in the first three hours since Tuesday’s aftershock.

Most have minor injuries, but some have more serious wounds, with doctors here saying that several people needing surgery.

Everyone is sensitive here, and we’re kicked out by one doctor, only to be brought back by another, who wants people to see what’s happening to locals here.

Bishow Bhatta is a Nepali now living in California, who came back nine days ago to volunteer.

Lying on a mat on the ground with a broken arm and leg, he says he helped evacuate the orphanage he was working in, when he found himself trapped.

“I get [sic] hurt from jumping off the roof, and hit the concrete floor,” he tells.

“My neighbourhood and my children, they get together and call the van, because there is no taxi, there is no ambulance, there is nothing. And everybody’s scared and they’re on the street. And they bring me here [to the hospital] in the van.”

Like all hospitals in Kathmandu, it was already over capacity treating the injured from April’s earthquake.

Hospitals were also evacuated of the patients that could move or be moved.

Now some are refusing to go back inside, out fear of more earthquakes and aftershocks. 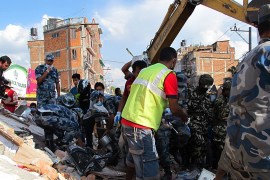 Dozens dead as magnitude 7.3 earthquake strikes near Everest base camp, two weeks after a quake killed more than 8,000. 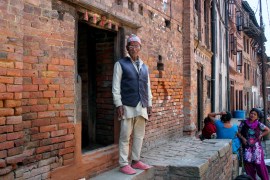 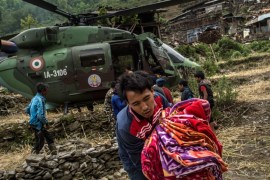 About $22m of $415m requested by UN and partners has been provided so far, amid large number of global crises.