Moscow, Russia – Warmth is not a word normally associated with Russia’s far northern extremities, one of the coldest places in the world with temperatures sometimes dropping to -50 degrees Celsius.

But under the East Siberian Arctic Shelf a process is taking place that could make the world hot enough to drive most life on the planet to extinction.

Or it could do nothing.

Trapped under the area’s seabed and permafrost is about 50 billion tonnes of methane gas. Increasing global temperatures have caused the Arctic ice to thaw faster, accelerating the release of the powerful greenhouse gas, scientists say.

“Oceanologic work showed that the amount of dissolved methane at the water zone of the Laptev Sea and the Eastern-Siberian Sea is several times higher then the amount of methane anywhere else in the world’s oceans,” says Vladimir Tumskoy, a researcher at Moscow State University.

“As the thawing keeps going, the amount of gas released is growing, but we don’t know how much it thawed in the past, because the studies on this have taken place only for 10 to 15 years,” says Tumskoy, who took part in a fact-finding expedition to the Arctic Shelf.

Or it could trigger a massive amount of methane to be released at once.

“Maybe at some point it will defrost to some huge methane storage and there will be an immense explosion and an outstanding methane release,” Tumskoy suggests.

The potential of such a release, however, is a matter of much debate.

Methane is often discounted in climate change discussions because it leaves the atmosphere about a decade after its release, as opposed to carbon dioxide that can last for hundreds, even thousands, of years.

But in the short term, however, methane can trap up to 100 times the heat that carbon dioxide does.

Some scientists worry a large release of methane over a short period of time could cause a drastic increase in global temperatures – inflicting irreversible damage to the planet.

“The potential for disaster is enormous,” says Ira Leifer, a methane specialist at the Marine Science Institute at the University of California, Santa Barbara. “In the past when volcanic eruptions altered the Earth’s temperature, 97 percent of the Earth’s species went extinct, ushering in a new era.

“We could be talking about something of a similar magnitude here.”

But Leifer says such a dire outcome remains uncertain.

“There’s no clear indication whether it will or will not happen – the problem is we know more about the moon than the Arctic.”

Other scientists disagree with such catastrophic assessments.

“There are two camps: the alarmist camp and the moderate camp – and I belong to the latter,” says Martin Heimann, director at the Max–Planck–Institute for Biogeochemistry.

“I do not think it’s serious – it’s part of a natural process that has probably been going on since the end of the last ice age,” Heimann told Al Jazeera.

“The possibility of a major impact is relatively small, and we need more statistics and monitoring sites to quantify it better.”

Debate is also swirling over which gas – methane or carbon dioxide – is the greatest contributor to global climate change in the long term.

“The sources for global warming are the natural objects that produce methane and release it to the atmosphere and different industrial objects built by people,” says Tumskoy. “So the question is which source is the dominating one.”

David Archer, a computational ocean chemist and professor at the Geophysical Sciences department at the University of Chicago, says the focus should remain on carbon dioxide.

“In the short term – the next 10-50 years – the Arctic is the source of a small fraction of global methane emissions to the atmosphere, and so it has – and I think will continue to have – a small impact on Earth’s climate, relative to fossil fuel carbon dioxide emissions,” Archer told Al Jazeera.

“I am most concerned about temperatures by about 2040 or 2050, as we start approaching the 2 degrees Celsius values that all the climate negotiations are trying to avoid. Methane released now will have very little impact by then because methane only has a 10-year lifetime in the atmosphere.”

However, all the scientists interviewed concur there is the need for more research and observation regarding Arctic methane.

Humanity is heading straight towards the worst case scenario with its foot on the accelerator.

The expedition that Tumskoy participated in – part of a series of Arctic research trips that started in the mid-1990s and led by oceanologists Natalia Shakhova and Igor Semiletov of the Pacific Ocean Lab Vladivostok – is a starting point.

“We don’t know too much about the mechanism of the process, we are just trying to understand it,” says Tumskoy.

“The uniqueness of our work is that for the first time Semiletov’s team … managed to show that the Arctic Shelf releases a colossal amount of methane.”

“If we as a species were to aggressively limit our methane release to compensate for the increased release in the Arctic, we could stabilise the climate for the short term and allow us time to figure out how to deal with carbon dioxide,” says Leifer.

“As it is, though, humanity is heading straight towards the worst-case scenario with its foot on the accelerator.” 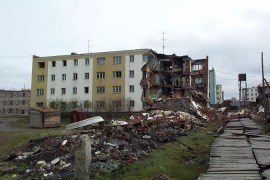 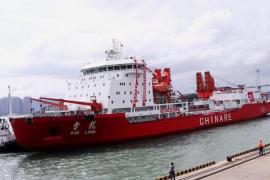 How the Arctic Ocean could transform world trade

Melting northern waters attract Asia’s commercial giants, but they will need the help of Arctic nations to succeed.