By Liz Gooch and Trevor Bormann

Wedged between tables stacked with perfume and fake designer handbags, a  stallholder peddled his merchandise – dozens of neatly organised boxes and blister packs of pills.

“I give you Viagra, Cialis, a good price,” he said, beckoning passers-by in the tourist area of Asok in bustling downtown Bangkok.

The man plucked even more pills from beneath his table, hoping to entice a reporter filming undercover.

They are the type of drugs that require a doctor’s prescription in most countries.

But these pills come with a vital difference – they’re fake.

Bangkok is overflowing with cheap, counterfeit goods; but the latest copies to hit the streets are much more sinister than the fake designer clothes and sunglasses on offer.

An Al Jazeera undercover investigation in Thailand and the Philippines has found fake medicines openly for sale on the streets and in pharmacies, putting lives at risk.

The World Health Organization calls this illegal trade a global health crisis, with counterfeiters producing copies of everything from blood pressure medication to vaccines to drugs treating HIV/AIDS and cancer.

Now the pharmaceutical companies who produce the genuine drugs are fighting back against this lucrative, illicit industry.

“When you buy a counterfeit medicine, you don’t know what’s in there,” said Mark Robinson, an investigator for Pfizer, the world’s biggest drug company.

Robinson said Pfizer has found pills containing everything from rat poison and brick dust to paint and floor polish.

Most of the fakes the company identifies originate in India and China.

They may sell for a fraction of the retail price but the consequences of taking counterfeit pills or poor quality imitations can be dire, as Estrella Alfaro discovered.

It's more profitable than selling heroin.

Until late last year, the Filipino woman, who was left a quadriplegic after a car accident 12 years ago, was taking a reputable brand name medicine that helped control her spasms.

The medication was expensive, so she switched to a cheaper brand. But her condition suddenly deteriorated.

“At first I thought it’s cheap and effective but I was wrong,” Alfaro told Al Jazeera. “I felt tightness in my chest, my blood pressure shot up.”

When she went back to the brand name medicine, her health improved immediately. The national Food and Drug Administration is now investigating whether the cheaper pills were fakes.

“People are trying to find money in order to buy what they need, and then getting something that doesn’t actually work because it is substandard, counterfeit or fake, without them knowing,” she said.

It’s not just people in Southeast Asia who should be concerned about what’s inside their pills.

Sophisticated criminal gangs are now selling fake drugs to consumers around the world via “online pharmacies”.

When consumers call the phone number listed on the pharmacy website, they are connected with a call centre, often in the Philippines, according to Ken Gamble, a cyber-crime private investigator based in Manila.

“They do the front line kind of processing from the website and then send it out to their counterparts in India and China … to actually ship out the drugs to the customer,” said Gamble, who investigates the websites on behalf of pharmaceutical companies and passes his findings on to the police.

“The money trail will go from Hong Kong into various other countries where the masterminds may have bank accounts… It’s rare that the money will come into the Philippines. It will usually go to an offshore merchant set up in a foreign country.”

Information from drug company investigators helped expose, in 2013, one of the biggest online pharmacy call centres in the Philippines, after a man was found dead in his hotel room in Thailand – fake Viagra by his side.

The purchase was traced to a call centre in Cebu City in the Philippines, and police moved in, said Senior Superintendent Arnold Gunnacao, from the Philippines National Police Anti-Cybercrime Group.

But authorities admit that tracking down fake pills is not a high priority.

“We just depend a lot of times on the information given from the drug companies,” said Superintendent Gunnacao.

It’s this kind of relationship between the police and the drug companies that concerns critics like Kannikar Kijtiwatchakul, a consumer health researcher at Thailand’s Chulalongkorn University.

She said police resources should not be used to help protect private property rights of pharmaceutical companies. 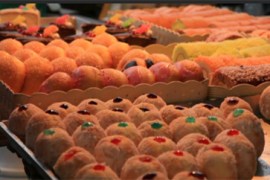 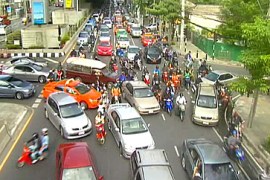 Back to business in Bangkok

Government weighs curfew extension even as life returns to normal in the Thai capital. 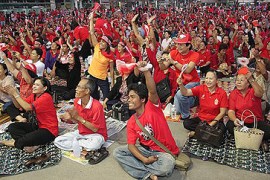