Baiyin City, Gansu Province, China – In a valley of low, rugged hills I am staring at the bend in a railway track. Around the corner there’s an approaching cacophony of rattles and blasts of steam. Noises from another era that reverberate around the valley.

And then it appears, clattering and shuddering towards me at 25 kilometres per hour, billowing puffs of nostalgia. It’s a mesmerising, unforgettable sight.

I am looking at one of China’s few surviving steam trains. The “Shang Yu 1047” was built in 1986, sixteen years before China stopped producing them.

My journey today has taken me to the outskirts of the grimy industrial city of Baiyin in Gansu Province, one of China’s poorest.

But it’s also a city that has become a citadel for rail enthusiasts from around the world. Among the recent visitors Roger Croston from England. “It’s wonderful to see it here in 2015. Steam locomotives have real character. It’s like a real life fire breathing dragon.”

The “dragon” services the local copper, zinc and lead mines.

By 7:40am, 10 minutes before the first service of the day, the gloomy carriages are filling up fast with workers.

Everyone seems to be lighting up and soon the air is thick with cigarette smoke. But the only person grimacing is me.

This amuses some of the miners and soon the entire carriage seems to be enjoying my obvious discomfiture.

Through windows streaked with coal dust and grease I can just make out the jagged edges of passing slag heaps.

China is modernising but it feels like I have been transported back to the satanic mills of Victorian England. It’s an endless depressing vista of industrial sprawl.

Like the mines, the train is also close to extinction. And no one is really sure what will finish first.

“This train will be eliminated sooner or later,” one worker tells me. “As for my future, I think the mines and factories will be shut down.”

As I canvas opinion about the impending end of China’s steam age, I sense not a hint of sentimentality or misty eyed nostalgia.

“I don’t see advantages to this steam train. It’s so dirty,” says another worker. “Look at it. It’s a commuter train. That’s it.”

There are no longer factories to make them. So the area’s surviving steam train must rely on cannibalised parts from two retired veterans, that now stand in a dilapidated rail yard outside Baiyin.

On the wall I notice a jaunty propaganda poster showing a bullet train beside a stream train. It’s a reminder that modernity is on the fast track in China.

The country now has the largest high speed rail network in the world, and it’s set to double in size in the next decade. So it’s now the beginning of the end for the area’s remaining steam train.

“If a crucial component like the boiler breaks we might not be able to replace it,” says Gao Xiaoyi, the train’s supervisor.

There were four steam trains when he started work as a supervisor 29 years ago. Now the service operates with a skeleton staff who on average are paid just $50 a week,

“The work’s just too dirty.” says Gao “And nobody wants to do it now. People who know how to fix trains have all retired. It’s not a skill young people want to learn anymore.”

But will he miss it?

“It’s a different era now. Time to move on. I am not sure what will replace it. But for sure it won’t be another steam train.”

Given the scale of China’s modernisation though, it is perhaps surprising that steam trains have lasted this long. 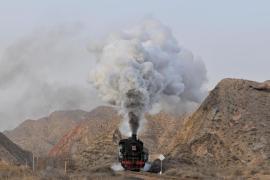 Gansu Province is home to one of the world’s last steam-powered trains.