Jerusalem – Palestinian Christians said they would not tolerate a repetition of the Israeli restrictions and violence which have in past years marred Holy Week festivities – culminating on Easter Sunday – and have vowed to pursue “other means” if no marked changes are made.

Speaking to journalists on Tuesday, community leaders expressed concerns that Israeli restrictions will prevent them from celebrating Easter this week, beginning with the Good Friday procession in Jerusalem, where thousands flock to walk along Via Dolorosa – the path believed to have been walked by Jesus before his crucifixion.

“There is one major change this year, and this is April 1, which is the day Palestine officially becomes a member of the International Criminal Court,” said Bassem Khoury, a Christian from Jerusalem, and former Palestinian minister of economy. “Denial of freedom of religion is … an issue we will pursue if we are denied [access to our holy sites].”

For almost a decade, the Easter celebrations have been marked with clashes between local Christians and Israeli troops, who regularly prevent worshippers from accessing the religious sites.

“Since 2005, Israel has closed the Old City of Jerusalem for us,” said Hind Khoury, former Palestinian minister of Jerusalem affairs. “We arrive to celebrate Palm Sunday and Holy Friday only to find the access doors closed and many Israeli military checkpoints along the way.”

This Friday, pilgrims and visitors will walk down the cobbled Via Dolorosa through the walled Old City, many bearing wooden crosses, to the Church of the Holy Sepulchre, where tradition has it Jesus was buried before rising again three days later.

This year, Easter festivities are coinciding with the Jewish holiday of Passover. Israeli authorities impose severe restrictions on Palestinians’ movement during that time, affecting both Muslims and Christians’ access to Jerusalem holy sites.

“Israeli authorities give some permits to Christians during religious holidays,” said Fr Jamal Khader, the rector of the Latin Patriarchate Seminary, who described himself as one of the “lucky ones” to have received permission to enter Jerusalem this Easter time.

“But at the same time, the access to the Church of the Holy Sepulchre is restricted and during Pesach [Passover] there are even more restrictions,” he said. “Permits are a means of control and this is a violation of our freedom of worship.”

Khader said that families from his parish often complain that permits are not given to the entire household, which often means having to drop plans to attend the Jerusalem festivities. Even those with permits cannot always take part in the processions because the Old City is “practically closed”, he said.

“Every year when we get here for the procession, we notice that the whole area is empty except for hundreds of soldiers and policemen,” he said. “This is a real problem for regular people; it dissuades them from participating.”

Difficulties in reaching holy sites come at a time when Christian leaders concede that the community’s numbers are in decline. In 1944, there were some 30,000 Christians living in Jerusalem’s Old City, according to official figures. Today that number does not exceed 11,000.

Many Palestinian Christians have complained in the past that they were beaten, shoved and prevented by Israeli forces from entering the Old City during religious holidays. Israeli authorities said they were merely using “crowd-control measures” because of the large number of visitors. This year, the Israeli tourism ministry said it is expecting about 130,000 over the period of Holy Week and Passover.

“We are not happy with the measures by [the Israeli municipality of Jerusalem],” said Archbishop Fouad Twal, the Latin patriarch. “We are afraid of a repetition of last year[‘s events]. Sometimes I wonder whether the [Israeli] policemen know why they are there – to help or to make our lives more difficult.”

Last year, the UN’s peace envoy to the Middle East at the time and other high-ranking diplomats were prevented from going through a barricade to the Church of the Holy Sepulchre for the “Holy Fire” procession – a traditional ceremony that takes place a day before Orthodox Easter.

Robert Serry said Israeli police forbade him and Italian, Norwegian and Dutch diplomats from getting to the church as he was being crushed by a waiting crowd at a barricade. They also ignored his requests to speak to a superior, he said.

At the time, Serry called their behaviour “unacceptable” and demanded in a statement that all parties “respect the right of religious freedom”. Israeli authorities denied Serry’s charges, saying he had displayed “a serious problem of judgement”.

Last year, Palestinian Christian communities turned to Israel’s Supreme Court, which agreed that Palestinians’ rights were being violated, and that checkpoints and other restrictions were hindering access to places of worship.

This year, they received official Israeli assurances of unhindered access to the church. “I’m not 100 percent optimistic that things will go fine even though we have assurances from Israeli security, even the president himself,” Bassem Khoury said.

But some Christians fear that it’s not only access to their holy sites that’s being lost in these festivities: participating in celebrations that extend beyond the religious. Ra’ed Sa’adeh, who owns and manages the Jerusalem Hotel, said he grew up in the Old City and took part in Holy Week celebrations yearly.

“Many of the activities have both religious and cultural [significance],” Sa’adeh said. “And as Christians, we are being deprived from exercising our culture. Now it’s impossible to be part of the popular celebrations, which are the natural cultural expression that people have been a part of for hundreds of years.” 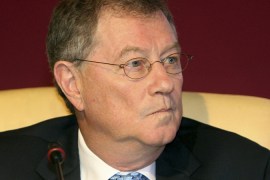 Israel dismisses Robert Serry’s accusation of blocking him from ceremony in Jerusalem church as “micro-incident”. 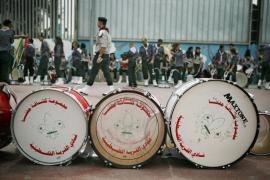