In a packed conference room at the Crowne Plaza Hotel in Nashua, New Hampshire, Texas Senator Ted Cruz sounded the alarm against a recent deal the US and other countries negotiated with Iran over its nuclear programme.

He says Tehran is “the single greatest threat” to security in the region and winds up the audience by telling them Iranians still celebrate a “Death to America” day.

“If somebody tells you they want to kill you, believe them,” he says to applause from the partisan crowd.

Cruz was in New Hampshire this past weekend to participate in the “First in the nation” Republican leadership summit.

It was a chance for anyone running for president in 2016 – like Cruz – and the many others who are still thinking about running – like former Florida Governor Jeb Bush – to make an early pitch to GOP voters for support.

And when it comes to US President Barack Obama’s Middle East policy, there was no shortage of criticism, particularly on the Iran deal, which would lift the decades-old sanctions against that country in exchange for the promise of a peaceful nuclear programme.

“Iran is the premier sponsor of terrorism on the planet,” said Florida Senator Marco Rubio, who announced his candidacy last week. “They use terrorism the way normal nations use diplomacy.”

As a Senator in the US Congress who recently signed a letter threatening to block the Iran nuclear deal, he not only opposes it, he argued, “our president should have never entered into these negotiations”.

It was a popular theme at the two-day summit largely because Congress is considering changes to the deal before a June 30 deadline in which the details are to be approved by all sides.

Expect plenty more Iran-bashing as the campaign heats up.

“The overarching theme is this: the Republicans think Obama does not fully grasp the dangers posed by many of the actors in the region,” said Kyle Kondik, a political analyst from the University of Virginia.

“And that he wants the Iran deal primarily as a way of retroactively ‘earning’ his Nobel Peace Prize.”

“If they [candidates] thought there was a chance of success,” he argued, “they would hedge their bets, but it appears they believe that the ‘deal’ will be nothing more than words and it will go down as a failed negotiation.”

Iran, however, was not the only target. Obama’s approach to all sorts of conflicts in the Middle East – from Libya to Syria to Yemen – has failed, most potential nominees argued.

It’s a theme Americans will hear over and over again as the campaign for the White House intensifies in the coming months.

When it comes to US participation in the fight against the Islamic State of Iraq and the Levant (ISIL, or ISIS as some call it), most Republican hopefuls hammered Obama over his perceived lack of leadership and believe the US should do more.

“This is a generational issue,” Wisconsin Governor Scott Walker said during his speech, referring to the threat from what he calls “radical Islamic terrorism”.

Echoing a theme by the previous Republican US President, George W. Bush, Walker said the US needs to “bring the fight to them and fight on their soil and not on ours”.

Kentucky Senator Rand Paul, who has opposed military action in Libya and Syria, agreed. “I support military action against ISIS,” the GOP candidate for president said in his speech.

Still, he criticised hawkish members of his own party who are far too eager to get involved militarily in Middle East conflicts.

Expect plenty of love for Israel, too, another popular theme over the weekend.

“We need to re-nourish the alliances that have kept us safe,” Jeb Bush told an audience. “We need a president that does not disrespect our friends like Israel.”

Bush was referring to the disagreements between the Obama administration and Israel, particularly over the Iran deal, which Israeli Prime Minister Benjamin Netanyahu has publicly opposed.

Carly Fiorina, the only woman who is expected to run on the GOP side, bragged to summit-goers she had a private meeting with Netanyahu and discussed his concerns over the Iran deal.

“If it were me, I would stop talking immediately,” she said of the negotiations.

“I would put all the sanctions on that we could unilaterally. And I would not talk to them again until they had agreed to full, unfettered inspections of every single nuclear facility they have.” 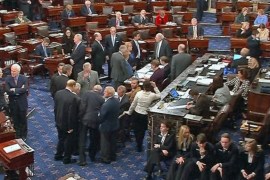 Committee set to discuss legislation which, if passed, could prevent White House from lifting sanctions on Iran. 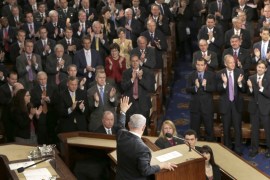 Iran and Obama dismiss Netanyahu speech to US Congress 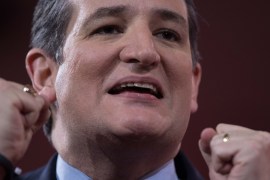 Texas Senator Ted Cruz to run for US president in 2016

Conservative senator declares candidacy on Twitter, saying “I’m running for president and I hope to earn your support!”