Jizan, Saudi Arabia – Three weeks into the Saudi-led campaign against Yemen’s Houthi fighters, one thing has become clear: that no side wants to continue fighting.

That includes Saudi Arabia, despite the elaborate preparations I’ve seen firsthand here on the Saudi side of the border.

The war has turned into a matter of hard choices, with more bloodshed every day.

The Houthis, who initiated the crisis by staging a coup against the legitimate president and by pushing south for more strategic territory, are now suffering losses on a daily basis.

Vital infrastructure in their northern stronghold of Saada is in ruins.

Had it not been for the fighters’ ability to mingle with civilians inside the cities, they would not have managed to survive for this long.

The Houthis have not only been extensively hurt physically, but also politically.

The hard-won, little trust they earned among the people of Yemen during the 2011 uprising against then-President Ali Abdullah Saleh has now been replaced by anger and hatred over the disaster their coup has invited.

Their political status in the world has been critically compromised after the UN Security Council resolution 2216, which considered them the aggressors and slammed their leaders with sanctions.

Their unlikely ally, former President Saleh, is in the same corner with them or even worse. The army bases and units loyal to him are in shambles.

The dozens of billions of dollars Saleh’s regime allegedly embezzled over the decades must by now be considerably strained because of the war effort.

The immunity he was generously granted by the world and even by the Yemenis who toppled him is practically if not officially abrogated.

Now to the Saudi-led coalition.

Saudi Arabia boasts tremendous military, financial and political resources for this war. But even with that in the mix, there’s every indication that Riyadh is praying for the speediest exit out of the fray.

Three weeks of heavy air bombardment has done little in rolling back the Houthis and Saleh’s actual grip on Sanaa, Aden and many other locations in Yemen.

This in itself is a huge embarrassment.

The deaths of hundreds of innocent civilians is a cause of deep regret, even if the Houthi-Saleh camp, as alleged, is responsible for some of the casualties.

And not less embarrassing is the Houthis’ continuous ability to cause harm on the Saudi side of the border.

Three soldiers were killed a week ago when fighters fired a mortar round at a Saudi border post.

So by way of summary, after three weeks of effort to reverse the Houthi coup, things are much worse than on day one of the campaign.

The traditional and universal concept of war dilemma has reached its apex.

The belligerents are locked in the fight and none of them is willing to step back first for fear of the worst.

Retreat would, for the Saudis, mean failure. For the Houthis, it would mean capitulation.

The Houthis are afraid of once again being reduced to a small, ragtag rebel group holed up in the northern mountain caves and chased by the international community for their alleged crimes, including cold-blooded murder and torture of opponents that have been documented by human rights organisations.

Saleh is afraid of being taken to The Hague for money embezzlement and his role as conspirator and instigator of the present plight of Yemen.

Saudi Arabia is afraid of losing face if it leaves the fight without any objectives achieved. It would also mean permanent insecurity along the border, an ever more unstable neighbour on the southern flank stretching 1,800km. And it would mean an annoying direct or indirect presence of Shia Iran with influence over that flank and the strategic waterways of the Gulf of Aden.

Even Iran, which may seem the least affected due to its relative distance geographically, is not going to gain from an open conflict which may entail more Western intervention in the region.

So, what can be done to resolve the crisis?

There are multiple diplomatic initiatives being discussed at the moment.

Russia has tried to table a peace plan which was rejected because it didn’t seem to put enough pressure on the Houthis in order to reverse their coup on legitimacy.

Iran is said to be about to propose a new peace plan of four points.

Saleh is trying to send an envoy to the Gulf leaders. It’s his second attempt to try to offer an alternative to war.

Probably the Houthis are the only side showing intransigence against the odds. But understandably any proposal by Iran is expected to be already endorsed by them as an effort on their behalf.

With all said and done, no one out there seems to be able or rather willing to impose a ceasefire on the belligerents – even though the warring parties themselves are in dire need of a way out.

And the suffering of civilians in Yemen has reached catastrophic proportions.

So any peace plan that satisfies the minimum demands of each side may well have a chance of success. 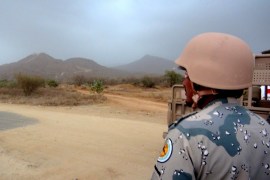