By Sheren Khalel and Matthew Vickery

Kiev, Ukraine – Vitaly Chornly looked ominous as he stared across the room dressed all in black, his long jet-black beard contrasting sharply against his pale features.

He sat up straight, crossed his legs, folded both hands on one knee, and began to explain the need for a 13th century crusade against Russia.

Chornly, a former molecular biologist, is the ideological officer for the St Mary’s battalion, a pro-Ukrainian militia group fighting on the front lines against pro-Russian separatists in eastern Ukraine. Fighters of St Mary’s, the de facto fighting wing of the extreme-right Ukrainian political party Bratsvo, have become embroiled in the war in the Donbas region as self-styled, modern-day crusaders.

Our soldiers are the bringers of European traditions and the Christian mindset of the 13th century.

Sitting in the basement of St Mary’s Kiev headquarters, Chornly claimed the battalion is Christianity’s equivalent to the Taliban – and its fighters are holy warriors.

“We are creating the Christian Taliban here. Our main ideology is faith, and this is the advantage we have,” Chornly told Al Jazeera.

“The enemy – the forces of darkness – they have all the weapons, they have greater numbers, they have money. But our soldiers are the bringers of European traditions and the Christian mindset of the 13th century. We represent the side of light against the dark side. Putin supporters are representatives of the devil.”

A cross and a sword

While Chornly insisted he does not support certain tactics used by the Taliban, such as suicide bombings, the targeting of civilians, and lack of religious tolerance, the militia does admire the way the group has been able to face powerful enemies and continuously battle despite smaller numbers and resources.

Their greatest praise for the Taliban, however, lies in the fighters’ complete devotion to their religion and the way they channel it into their fight, Chornly said.

“The main thing we admire from the Taliban is their constant faith in God. They came across terrible conditions and war and still they continued their struggle and they were successful. Faith is much stronger to fight with than political ideas.”

The Taliban have faith behind them, Chornly exclaimed frequently, and it’s that which allows them to fight and win against strong enemies.

Not only does the St Mary’s battalion have the same strength of faith as the Taliban, he claimed, but it illustrates that the Christianity he believes in can contain violence, and that his religion does not just consist of the cross, but also the sword.

Serediuk commands 150 armed men in St Mary’s, as well as about 50 other occasional volunteer fighters.

Each is deeply religious, taking inspiration from the modern-day Taliban, as well as Christian crusaders of the 12th and 13th centuries.

Crusade to the Kremlin?

More than half of the fighters are not currently registered with the Ukrainian government, Serediuk admitted – registration is not efficient when there’s a war going on, he said.

While registered fighters receive weapons issued by the Ukrainian government, unregistered ones just go to the war zone in the east with the battalion regardless and get weapons from looting enemy bodies, Serediuk told Al Jazeera.

“But still we have only enough weapons to die, but not enough to fight,” Serediuk said, insisting their successes come from their faith and character, not their equipment.

Large men in full camouflage moved in and out of the basement headquarters, gathering around the doorway of the room where Chornly and Serediuk sat. Looking anxious, Chornly stared at his watch and explained he must lead the gathering men in a group prayer.

“We aren’t many,” Chornly said. “But we are powered by religion. When you have that, you do not need men in numbers.”

As recent ceasefire negotiations between the Ukrainian government and pro-Russian separatist forces turn towards autonomy in the eastern regions currently under separatist control, St Mary’s battalion insists they won’t back down.

“St Mary’s battalion does not answer to anyone but God,” Chornly said when asked about talks of eastern autonomy and ceasefire negotiations.

“We will continue our fight until the Kremlin is in ruins, no matter what.”

Standing up against peace and pagans

Professor Ivan Katchanovski of the University of Ottawa told Al Jazeera that although St Mary’s may be small in numbers, their armed volunteers could pose a serious threat to peace talks in the east because of their strong ideological roots and desire to fight, compared with the conscripted Ukrainian army.

“These militia and paramilitary formations have the ability and desire to break the current shaky ceasefire and continue the full-fledged civil war,” Katchanovski said. “While the numerical strength and armament of these units are much less compared to the Ukrainian army, their motivation to fight is much stronger.”

Serediuk said the Ukrainian government is scared of the militia he commands, and he remained adamant his men would not honour any lasting ceasefire – the men of St Mary’s are holy warriors who will not lie down for anyone, he said.

Political decisions that involve compromising with the separatists of Russia are not on his agenda.

Serediuk originally fought the separatists in the east as part of the Azov Battalion – a notorious far-right Ukrainian militia organised by the neo-Nazi Social-National party.

Serediuk didn’t leave the Azov because of the neo-Nazi connections, however – extreme-right ideology doesn’t bother him. What does irk him, however, is being around fighters who are not zealous in their religious convictions.

“I left the Azov because it was full of pagans. Committed Christians in the Azov were not allowed to stop to pray throughout the day – I needed a unit of Christians, a closely knit unit of committed Christian warriors. When two of three Christians gather around, they have God with them, and victory is guaranteed to be with us.”

‘Until the Kremlin falls’

Serediuk repeated the words of his ideological officer often: St Mary’s is the beginning of a Christian Taliban in Ukraine, he said.

Periodically rubbing the gnarled scaring that stretches across the top of his right hand, Serediuk stopped at his missing finger, lingering there for a while. The wound happened last August in an encounter known in Ukraine as the “Massacre of Ilovaisk”, where at least 100 pro-Ukrainian troops were surrounded by pro-Russian forces and gunned down.

Many fighters were lost in that battle, Serediuk told Al Jazeera, but Ukraine’s Christian Taliban is prepared to lose every one of their men in the name of defeating Russia.

“People have an image of a Christian as a peaceful abbot, someone sitting around lit candles,” Serediuk said.

“We are not just some faith organisation. We are the sword instead of the cross. We will fight until the Kremlin falls.” 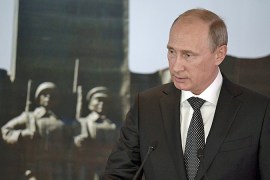 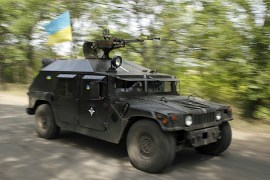 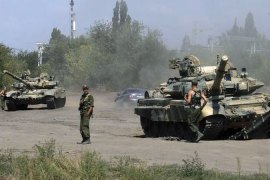