The embers of the quarter-century-old war over Nagorno-Karabakh – a landlocked mountainous region in the South Caucasus that lies at a crossroads between East and West – are smouldering again, and raising concerns another full-scale war is not far away.

The region has been the playground of empires for centuries with the Persian, Russian, Ottoman, and European empires wrestling over its natural resources and geostrategic advantage – while various ethnic groups fought for local control.

The most recent conflict erupted in 1988 after 65 years of imposed peace under Soviet rule, when Armenians living in the Nagorno-Karabakh region of what was then the Azerbaijan Soviet Socialist Republic (SSR) declared their desire to separate and join neighbouring Armenian SSR.

What was initially a peaceful movement soon degenerated into violence and ethnic cleansing by both sides, and ultimately a full-scale war between the newly independent Republics of Armenia and Azerbaijan in the 1990s.

It was one of the most brutal conflicts to result from the imploding Soviet Union with an estimated 30,000 people killed, mostly civilians, and hundreds of thousands displaced before a ceasefire took hold.

“You are asking very painful questions,” said Ashot Harutiunyan, a war veteran and director of the history museum in the town of Shushi in Nagorno-Karabakh, when asked about the region’s bloody past.

Life before the war, he said, was different “because that was during the Soviet government. It was a government where people couldn’t discuss questions of national identity… And of course we lived in this system, had neighbours, visited each other – there were good Azeris.”

Aynur Jafar was an internally displaced person who fled her home in the Azerbaijani city of Aghdam with her family when the situation became too dangerous.

“It was a very peaceful place and even Armenians were coming and visiting,” she recalled. “I mean, we were neighbours, we were living peacefully … we didn’t think a war could happen.”

“We kept hand grenades at home. Everybody had this … in case they suddenly attacked,” Jafar, who was seven-years old when the war started, told Al Jazeera.

The stories of torture from neighbouring villages were so terrifying that all in the community feared being taken hostage.

“We’d decided to come together and just use that grenade to [commit] suicide,” Jafar said.

Traumatised civilians, who initially resolved never to abandon their homes, felt lucky to have escaped the war zone in the end.

“People didn’t even have time to pack some things. They just ran … arriving in Yerevan [Armenia’s capital] with just the clothes on their backs,” Silva Prodan, who served as a doctor in the war, said of the Armenian refugees who fled Nagorno-Karabakh upon being caught in the crossfire.

By the time a ceasefire was negotiated in 1994 with the help of regional powers, Armenian forces took control over Nagorno-Karabakh, along with some buffer corridors of Azeri territory, and Nagorno-Karabakh declared itself an independent republic, albeit unrecognised by much of the world, with its own government and military.

The ceasefire has far from resolved the conflict, however, and failed to lead to a peace agreement. To the contrary, said Harutiunyan. “Basically since 1994 … there has been an ongoing unofficial war”.

Azerbaijan vows to re-establish the integrity of its “occupied” territories sooner or later, while Armenian authorities boast they will retain the “liberated” Armenian lands.

In the 25 years since the ceasefire, tit-for-tat gunfire has resulted in periodic deaths of border guards on both sides.

But there has been a significant escalation in these incidents recently involving the use of heavier weapons and attacks on civilians, “which was not visible as often before”, said Arsen Kharatyan, a Tbilisi-based freelance journalist.

In 2014, 60 people died in cross-border violence, with one of the more serious incidents involving the downing of an Armenian helicopter by Azeri forces in early November.

More troubling is both Armenia, and by proxy Nagorno-Karabakh, as well as Azerbaijan have been amassing an unprecedented presence of weaponry, with Azerbaijan’s annual military budget reaching $3bn by 2011, exceeding Armenia’s entire gross domestic product.

In his New Year’s greetings to the armed forces, Azerbaijani Defence Minister Zakhir Gasanov announced: “We will not allow the enemy to live peacefully on our historic lands. We will restore our territorial integrity.”

On the other side, Armenian authorities have indicated they are preparing for all-out war.

Armenian President Serzh Sargsyan responded to the latest border violence with: “We have prepared many surprises for the hotheads in Azerbaijan.”

A tangle of alliances raises further concerns that the escalating situation could expand beyond full-scale war into a wider regional conflict.

Russia has taken Armenia under its wing, while Azerbaijan, with its abundant oil resources and strong cultural bonds with Turkey, has forged alliances with NATO and the West.

On February 7, senior officials of the Organisation for Security and Co-operation in Europe (OSCE) and the Minsk Group, comprised of the United States, Russia and France – tasked with finding a peaceful resolution to the conflict – met to discuss the worrying developments and issued a statement condemning the deadly and escalating aggression from both sides.

Officials encouraged the involved parties to stop the violence and take “steps to reduce tensions and strengthen the ceasefire and … find the political will to begin this process immediately without excuses”.

A full-blown war is in nobody's interest.

From February 16-19, representatives from these organisations travelled to the region for personal meetings with officials of the conflict countries to further discuss “the dangerous rise in violence”.

No need to worry

Despite the heightened state of alert, however, analysts agree there is no reason for worry about an escalation and, on the contrary, the current situation of perceived danger actually benefits some of the countries involved.

“A full-blown war is in nobody’s interest,” said Luke Coffey, a political analyst.

Both Armenia and Azerbaijan want to pursue economic development and recover from the devastating effects of the war, he said.

Coffey, who just returned from a visit to Azerbaijan, said although Azeri officials vow to retake “stolen” territories, Azerbaijan, in particular, has much to lose.

Likewise, Armenia, is working to recover both economically and politically from the war, and on reducing its dependence on Russia and diaspora remittances, and cannot afford another full-out war.

“In order to reach peace with a neighbour, we must first make order inside our own country,” said Harutiunyan, the museum director.

“We must create a strong economy, jobs, a country of social justice,” because economic development is key to any successful peace process, he continued.

Another war would be “disastrous for all parties”, agreed Kharatyan. “Political rhetoric is one thing, and it is strongly directed to internal audiences, all politics is local.”

Creating distractions at the border takes attention away from internal political troubles for the leaders of both Armenia and Azerbaijan, he argued.

“This is especially true in the case of Azerbaijan,” said Arzu Geybullayeva, a political analyst and human rights activist based in Istanbul. “To divert international attention from these issues, the Azerbaijani government is skilfully using the conflict and escalation.”

Regional powers also have a stake in the status quo of instability in the region.

“I think part of it is that Russia is antagonising Armenia to take more of an aggressive stance, and that is triggering a response from Azerbaijan, so both sides are willing to use force along the line of control… But I think Russia benefits from this,” said Coffey.

It is interesting that despite being members of the Minsk Group, Russia and the US are among the main suppliers of military equipment to both countries.

The Minsk group, explained Coffey, “right now is dead, just because of the political realities… It can issue statements, but that’s the extent of its abilities.”

The spotlight brought on by the instability in the Caucasus, “distracts the West [in light of the Ukrainian war], and makes Putin look like a statesman [trying to broker a peace deal], and helps Russian oil and gas companies” by pushing business away from unstable Azerbaijan, he added.

Turkey, on the other side, explained Coffey, “needs the investors to look to the South Caucasus. They need oil and gas transiting through the region into Turkey, because Turkey has this aspiration to be a regional oil and gas hub”.

Yet, despite this economic incentive, Turkey remains steadfast in its support for its ally. The Turkish-Armenian border remains closed to this day.

Despite all the noise, the casualties, and the rhetoric of war – the status quo will likely linger.

“Which is terrible,” said Coffey. “I think that’s the reality, especially in the South Caucasus, [where] these frozen conflicts find a natural home.” 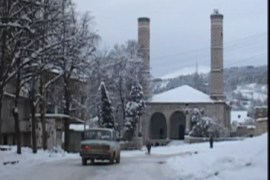 Shusha, a historic town in Nagorno-Karabakh, is a casualty of Armenia-Azerbaijan conflict. 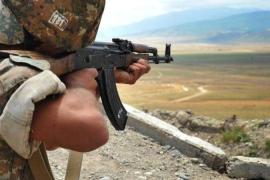 Crimea, Nagorno-Karabakh and the Gordian Knot

Is this an opportune moment for Eurasian powers to tackle the festering Nagorno-Karabakh conflict?