Hezbollah flags now fly in Tehran, Baghdad and in parts of Lebanon.

The Shia ‘Party of God’ has become much bigger than before, and as a regional player is pushing its boundaries ever further.

It now has a prominent role in Syria that has been confirmed by Hezbollah leader, Hassan Nasrallah.

Ostensibly, the group is in Syria to defend religious shrines, but that role seems to have expanded to include actively fighting anti-Assad forces. ‎

In Iraq, rumours have long circulated that small numbers of Hezbollah fighters have trained Shia militia forces and while they remain unconfirmed there’s no doubt that Hezbollah and the Shia militias share the same goal in fighting the Islamic State of Iraq and the Levant (ISIL) on both sides of the Syrian-Iraq border.

However, now there are some in the region that are openly questioning whether Hezbollah are militarily stretched with their commitments in Lebanon and Syria.

Hezbollah’s reason for being is predominantly as a resistance movement against Israel with which it has fought in the past, as recently as 2006. Its philosophy is to prevent a full scale Israeli invasion into Lebanon.

If Israel attacked Lebanon right now, would the group be able to repel the attack?

Retired Lebanese Brigadier General Tannous Mouawad thinks so. Speaking from Beirut, he says: “It depends on the scale of the attack. If it’s short and small they can face it.

“If it’s a larger and longer operation, that’s different, and then Iran and Syria have to interfere. I don’t share Hezbollah’s political views, but I do see signs of them being able to fight on two fronts.”

In Israel, Professor Efraim Inbar, the director at the The Begin-Sadat Center for Strategic Studies‎ and a security expert, told me that “Hezbollah has a very large missiles arsenal. Moreover, it has acquired significant combat experience in Syria, they have increased their numbers.”

“The Israeli government is cautious in its use of force and prefers no escalation at this time,” he said.

“Israel cannot eradicate the group completely, they are well rooted in Lebanese society and as much as I disprove of the Lebanese support for the group. However I do think Israel could go after Hezbollah much harder and I think we should hit them much harder than we are doing.”

The emerging thinking on Hezbollah would then suggest the conflict in Syria has further battle hardened the group to the point where a number of military assessments suggest without a large scale engagement the group will not be degraded.

What the Syrian conflict has offered Hezbollah cannot be understated. With about 4,000-5,000 fighters in country, according to public Israeli statements, the group is gaining experience in battle that history has so far denied it.

As a resistance movement, when fighting the regular Israeli army in 2006, Hezbollah relied on small teams of five or six people using anti-tank weapons against Israel’s sophisticated Merkava Tank to devastating effect.

Its hit and run tactics have meant it was seen as “guerrilla” force. In Syria it is a very different war.

A report by the US defence think tank Understanding War suggests that “the role of Hezbollah in Syria shifted dramatically in early 2013 from what was primarily an advisory mission to one in which Hezbollah forces assumed a direct combat role, operating in larger numbers alongside Syrian military and paramilitary forces”.

“They also expanded their efforts to train a reorganised pro-Assad paramilitary force,” it said.

But beyond battlefield experience it has been suggested by US Israeli military officials quoted in the media that the Assad regime is also supplying Hezbollah with weapons previously unavailable to the group as payment of sorts for its support.

But what does this mean for Hezbollah support within Lebanese society?

Some, particularly within the Sunni community, began to openly criticise the group, claiming it had forgotten its old enemy, Israel, and was engaged in killing fellow Muslims.

Nasrallah answered his critics in January in a public address, saying: “Hezbollah did not want war with Israel but was ready for one and had the right to respond to Israeli “aggression” in any time and place.”

Others in Lebanese society suggest that the group should merge with the army and become formalised.

Hezbollah‎ are unlikely at this stage to want to become a part of the Lebanese army for a number of reasons, chief among them that the group would lose its political clout.

There are other ways, however, to bring the group more in line with Lebanese society.

Hezbollah has as its chief backer Iran. If a deal can be reached between Tehran and the US over its nuclear programme, then Iran has an impetus to bring further changes in its foreign policy positions on Assad and Hezbollah that might have a significant effect on the region, but it will only do so from a position of strength, and not as part of any quid pro quo deal.

However, no agreement could have a devastating effect.

Mouawad continues: “if there is an agreement between the US and Iran then we might see a strong Hezbollah fully engage in the political process with a Shia minister in a position such as defence, a change in the constitution.

“However, without a US-Iranian agreement, I think, we are going to stay in the current position and head in the direction of a regional war.”

So far neither Iran or the US and the other Western powers have talked about Iran’s role in the region as being a part of the nuclear talks.

“Hezbollah is independent from the talks between Iran and the West,” says Kamel Wazne, the founder of the Center for American Strategic Studies in Beirut.

“There are no talks between Hezbollah and Israel and there will never be talks between them, Hezbollah remains a deterrent force and not a force of aggression and remains in place to defend Lebanon.”

So it would seem that across the region some are confident in Hezbollah’s ability to fight a war on two fronts, both in Syria and against Israel, but we won’t know until it has been put to the test.

However, for Israel Hezbollah is but part of a bigger political calculation that sees Iran as its chief enemy.

Israel is eyeing the potential Iranian-Western nuclear deal carefully and Israeli Prime Minister Benjamin Netanyahu is clear, the West is about to give too much away to Iran, which may mean he might be factoring in the ‘Hezbollah issue’ into any plans he might have to disrupt the deal.

Already this year, Hezbollah and Israel have clashed and the Israeli prime minister has warned the group could face assault, saying: “The IDF is prepared to act on all fronts”.

Once he factors in Iran, Netanyahu may well decide the best way to weaken Iranian influence in the region is to go after Hezbollah in Lebanon. 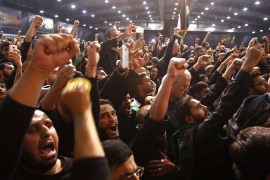 Hezbollah leader’s address to supporters in Beirut coincides with Ashoura procession and ongoing tensions in Lebanon. 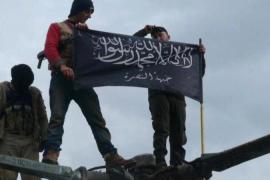 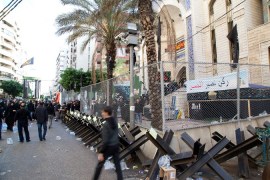