It’s all I heard all morning. As the Al Jazeera team set up our live broadcast location it’s all that anyone could say to us.

“He did so much for Singapore.”

Singapore’s first Prime Minister Lee Kuan Yew was a man of many talents, some admired, some not, by the international and his own domestic community.

Opposition and dissent were crushed – let’s not mince our words here. Opponents were either made bankrupt through endless court cases or made to live in self-imposed exile.

Yet his vision was simple. Despite having no natural resources to talk of, Singapore did possess a natural deep water reef – a shipping port that he managed to develop in the 1960s.

With that development, came the business, as Singapore became a hub for tankers and cruise ships; the Asia-Pacific’s equivalent of Heathrow Airport, but on water.

Singapore had become a economic powerhouse and one to be respected, certainly by it’s neighbours.

It’s this very development over the past 50 years, since an independent Singapore was established, that so many people here have reflected on this past week. This man’s determination to make a backwater province a world class business centre.

It’s this very reason tens of thousands lined the streets on Sunday.

Six deep, they carried the national flag and waited ever so patiently in the pouring rain over a 15km stretch that would be the route for Lee’s funeral procession.

They were young and old and from all ethnic backgrounds.

Many carried their children on their shoulders to make sure they got a glimpse of the coffin passing through the streets. Many hoped this would be an enduring image that even a child might remember in the future.

TV crews from the around the world positioned themselves alongside us under a semi-covered walkway. That didn’t stop the driving rain from becoming my best friend for the day.

The public would come up to us to watch and listen to what I had to say live, positioning themselves respectfully at a distance so as to be able to hear while not being in my eyeline.

Afterwards, little children would want to see our camera and our iPads. They were all tuned into the pictures being transmitted on state TV, a chance for me to see what going on and being said as the coffin made its way to the university where the final service would be.

There was a VIP guest list of 2,200 for the funeral service, and over 500,000 paid their respects as they walked past his body, during the four days Lee laid in state at Parliament House.

But for me, one lady summed up the situation perfectly.

As the funeral cortege left the university for a private family cremation, she shouted right next to me.

“Bye Bye… We love you!… Thank you for Singapore.” 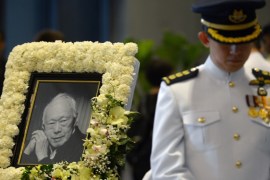 More than 100,000 people line the streets in elaborate state funeral for the country’s founding father and first PM. 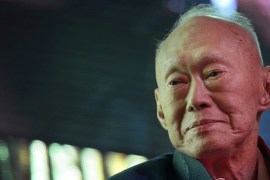