The decision to end American coffee chain Starbucks’ “Race Together” campaign seemed to ignite little hullabaloo among patrons on Monday.

But the effort to get people’s names spelled correctly on their coffee cups continues.

Following a slew of online critics, Starbucks CEO Howard Schultz announced over the weekend employees would no longer be writing “Race Together” or pasting stickers on coffee orders with the same slogan.

The idea was launched on March 16 in an effort to stir a conversation about racism and racial issues in the United States.

“We at Starbucks should be willing to talk about these issues,” Schultz said at the time.

“Not to point fingers or to place blame, and not because we have answers, but because staying silent is not who we are.”

Coffee without the politics

US race relations have been the subject of a lot of controversy over the past two years following the high-profile deaths of African-American men by white police officers.

Critics online blasted the company saying they prefer their morning coffee with sugar rather than politics while others flat-out mocked the heavy-handedness of it .

“While there has been criticism of the initiative,” Schultz wrote to employees announcing the end of the initiative, “and I know this hasn’t been easy for any of you – let me assure you that we didn’t expect universal praise.”

Katie Stewart, a student who goes to Starbucks at least once a day, told Al Jazeera on her way out of a store in Washington, DC, it’s still a good conversation to have no matter where it is.

Still, many customers would simply be happy with a proper spelling of their name on their coffee order.

American comedian Patton Oswalt lampooned both the “Race Together” and the frequent misspellings in a Tweet.

"You've opened my mind. Write 'Martin Luther King' on my latte cup."
CLOSE UP: Latte with "Marda Lou Thinking" on it. #RaceTogether 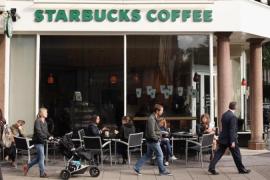 US coffee chain has only paid $14m in corporation tax in UK since 1998, and nothing in past three years, probe finds.

Almost having one third of the UK coffee shop market, Starbucks has paid corporation tax only once in the past 15 years.