In the Western world there is a real perception that tuberculosis is an old disease, something that has long since died out.

The stories of months of hospital confinement and medical staff wearing head-to-toe protective clothing to dole out drugs to patients are all but a distant memory. But in the developing world, it is far from stamped out; in fact in some places it is at epidemic proportions.

It is the one of the world’s biggest killers, with the World Health Organisation suggesting that an estimated 1.5 million people die globally from TB each year. But that number could be much higher because millions go undiagnosed.

The UN wants to stamp out the disease completely by 2035, but it has a difficult task ahead.

They are far harder to treat because as their name suggests, they are immune to the usual antibiotics used against TB.

What’s left to treat those diagnosed with the drug-resistant patients are toxic cocktails of drugs that are decades old, and never intended to treat TB.

The regimen demands a strict routine of injections for the first six months and drug-taking – an average of 16 tablets per day – for up to two years. They commonly cause nausea, vomiting, diarrhoea, dizziness and disorientation and, less frequently, a complete loss of hearing.

Not surprisingly, up to 30 percent of those who start the regimen never complete it. What happens to those who fail to complete the course of medication is not really known because they fall off the radar and studies have not yet tracked their progress. It is suspected they simply go on to die.

New diagnostic tools that are better at detecting the disease have found that the prevalence of the drug-resistant forms of TB is far higher than imagined. In South Africa alone, Doctors Without Borders says 14,000 people are diagnosed with either MDR-TB or XDR-TB each year.

New approaches being piloted to avoid long hospital stays and make medication more accessible on the community-level are proving beneficial, but it is still not enough.

Even if all those diagnosed with the drug-resistant TB get onto treatment, there is still only a 50 percent chance they will survive.

The only way that the UN can realise its aim of getting rid of TB altogether in the next 20 years is by encouraging the development of new drugs. The problem is the production of new medicines is wildly out of step with the development of the disease.

It is easy to see why 95 percent of those who die of tuberculosis live in developing nations.

The vast majority of sufferers are people who can scarcely afford to support their families while they’re sick with the disease, let alone afford the regimen of drugs that will save them.

And that is assuming they are even available – most of the time they are not because they are too expensive for governments to buy.

Hughes says “the incentive for a drug company to produce a TB drug is not there.

“There needs to be some sort of mechanism to incentivise drug companies to make TB drugs and make them affordable, to the people who most need them”.

She says without treatment, the drug-resistant forms of tuberculosis will continue to be passed on to large numbers of people.

“Treatment is really crucial for reducing your infectiousness. So unless we can improve that, we’re really not going to get on top of the epidemic.”

But getting on top of the epidemic requires commitment – from governments for better roll-out of care, but also from pharmaceutical companies to develop new, life-saving drugs. 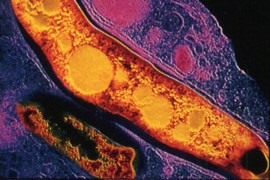