Tank, Pakistan – The neat row of white and camouflage green tents and orderly gravel paths lined with whitewashed stones stand out starkly against the rocky, barren desolation of this part of the Pakistani frontier.

It is here, in the wide open spaces opposite the colonial-era Kaur Fort and just 35km southeast of the birthplace of the Tehreek-e-Taliban Pakistan, that hundreds of residents of the South Waziristan tribal area are preparing to finally go home, six years after they fled the conflict in their area.

“Before the area was in the complete control of the Taliban, the same way that the area is completely under the Pakistan Army’s control today. There was no government and no army there back then,” says Abdur Rehman, 34, who, like thousands of other internally displaced people (IDPs), fled the bombardment of the military’s Operation Rah-e-Nijat in 2009.

The military operation triggered a mass exodus, setting off one of Pakistan’s first major militancy-related IDP crises. All told, about 500,000 people have fled South Waziristan since 2009.

Rehman is one of about 21,300 people who are now returning to cleared parts of the volatile tribal region, which continues to see active operations against the TTP and local militias. In all, there have been 11 rounds of returns since 2010, but the response from IDPs has been lukewarm, with only 16.4 percent choosing to return, according to Pakistani government data.

“When I went back [in 2014] I wasn’t able to go to my home, because the army had occupied our house. They didn’t let us in,” says Rehmanullah, who was just 14 when he left his village of Maula Khan Serai.

“There were many restrictions there, no one could move about easily. So we came back, thinking that this is no place to live.”

Those availing the government’s voluntary repatriation scheme, which is run by the FATA Disaster Management Authority (FDMA), must first go through a rigorous process of biometric verification, registration and cross-referencing of their records against state data on their initial displacement.

Once completed, the government then provides roughly $100 per family to cover transport costs to their homes, and $250 per family to cover basic expenses when they return. Returning IDPs are also given food rations for the next six months, as well as tents for those whose homes were destroyed in the fighting or floods that have hit the region in recent years.

Several IDPs, however, complained to Al Jazeera that they faced difficulties in cash disbursals, which are administered through local mobile phone service providers.

“We have heard that some retailers have been charging Rs500 [$5] per IDP to give them the money, or have been asking for bribes,” says Muhammad Tashfeen Ali Khan, an official at the Kaur Fort camp.

But there are more basic concerns among IDPs, too.

“These people are happy to return to their areas of origin, but they are also concerned about the state of their homes and shelters … and we hope the government authorities will try to address this,” says Qazi Tanveer Alam, a UNHCR official overseeing operations at the camp.

“We hope that we can go back and rebuild the land,” says Muhammad Gul, 48, of his home in the village of Deeba. “Our whole area is destroyed. It will be expensive to rebuild everything.”

“Right now there is no one there. When we go there, we’ll see what’s left there of our homes and shops.”

The government says it is planning the phased return of IDPs in order to ensure it is in a position to restore basic services in the areas they are returning to.

“For those who are going back, we have initially rehabilitated schools, hospitals and basic facilities,” says Nawab Safi, the assistant political officer for South Waziristan. “They are going to their homes, but we are giving them temporary tents, and will be carrying out surveys of their [damaged] homes as well.”

The government says it will be providing grants of roughly $1,600 for partially damaged and $4,000 for completely destroyed homes.

The money will be crucial in rebuilding structures in an area still governed under British-era dictatorial laws, and which has historically lagged far behind the rest of Pakistan in socioeconomic indicators and government service delivery.

“We are all going back now – this is not temporary,” says Rehman. “Our business is in Karachi now, but our home is there [in Deeba]. It is our own area, why should we leave it?

“In Deeba there are no services. But we are forced to return, because it is hard for us to put up [our household of 27 people] in a city. In our own area, we don’t have a gas bill to pay, an electricity bill to pay, rent to pay.”

Said Umer, the FDMA’s coordinator for South Waziristan, says it is this fact, more than any other, which pushes desperate IDPs to return home.

“The infrastructure is totally destroyed, but because this area is these people’s home, they will go back to it under any circumstances. And these people are the poorest of the poor. They are not able to afford to live on rent in settled areas like Tank,” he told Al Jazeera at the Kaur Fort.

The TTP ruled over South Waziristan from 2007, when it was founded by Baitullah Mehsud as an umbrella organisation of armed anti-state groups until 2009, when the military drove them out into other tribal areas during the military operation.

At the time, most fled their homes with little more than the clothes on their backs.

“When we were leaving, we didn’t know anything. We were just trying to save ourselves,” says Rokh Badshah, 34, from the village of Chagmalai. “We were stuck in the mountains in the winter. It was raining incessantly. We spent 10 days there, out in the open, and then we were able to come down towards [the town of] Dera Ismail Khan.”

Today, despite the military’s clearance of much of the area, tensions remain high in other parts of South Waziristan, with no-go areas for citizens and the civilian administration.

The Taliban issued a warning to returning IDPs just days before repatriations began.

“Those Mehsuds who are returning to South Waziristan on March 16, we advise those people that they should not try to return to Waziristan. The war between the mujahideen and the Pakistan Army is ongoing in different parts of Waziristan … and if the Mehsud tribesmen return to these war-hit areas, there will be a huge increase in their difficulties,” said Azam Tariq, a spokesman for the TTP’s South Waziristan faction.

In the last three weeks, an improvised explosive device wounded at least 12 security personnel in the Sarwakai sub-district, while another 13 unidentified bodies were found in the Shaktoi area. Both are adjacent to areas where IDPs are being repatriated in the current month-long drive.

FDMA coordinator Umer brushed off concerns that these incidents had a bearing on residents’ security.

“When that area is [declared closed by the army], then why are you living there?” he says, referring to the Shaktoi incident. “You are living there like thieves, then. We have told you 10 times to leave that area. And militants are there, so these issues will continue. Those who are living there, it is their own fault, they chose to live there.”

The army says it takes threats against returning IDP’s seriously, and it has been providing security and support to the camps and convoys of people going back.

“The threats are meant to create panic,” says Major Ishtiaq Ahmed, a military spokesman at the Kaur Fort camp. “[The TTP] do not have the capability to carry out such attacks. The army assesses these threats and takes them seriously.”

For local and international humanitarian aid agencies, the security situation is not ideal, but there is little choice but to work with the military in Pakistan’s tribal belt.

“I don’t like to see pictures where we have army vehicles with heavy machine guns at the front and back of a convoy – this is not a return with safety and dignity,” says Jacques Franquin, the UNHCR’s representative in Peshawar. “But it is necessary in order to reassure people that they are being protected by the police and the army and the government.”

He adds as more people are repatriated, security and development will increase.

“We have to proceed step by step and we have to make sure that the issue of security is addressed clearly in all areas. It would be a bit too ambitious to imagine that we will return everyone at the same time at the same moment,” he says of the remaining 422,300 IDPs from South Waziristan.

The army maintains a heavy presence in South Waziristan with active operations ongoing in several areas, alongside the continuing Operation Zarb-e-Azb in neighbouring North Waziristan, where many of the TTP’s top commanders and allies took shelter since 2009.

Since June, the military says it has killed more than 1,464 “terrorists” in operations in North Waziristan, and cleared most of that tribal area.

In South Waziristan, more than 40,000 soldiers are deployed. For some in the tribal region, however, that continued presence, even after the departure of the Pakistani Taliban, is unwelcome.

“The truth is that I do not accept either rule: not the Pakistan Army’s and not the Taliban’s.” 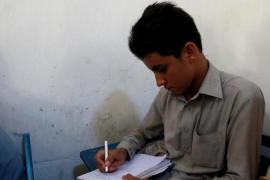 Government accused of doing little for education of about 300,000 displaced due to army offensive in North Waziristan. 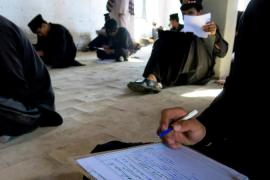