There are some journalists who are saying that tourism in Tunisia is “dead” following the targeting of tourists in a deadly attack on the Bardo museum in the capital on Wednesday.

It is true that the attack could not have come at a worse time, just before the beginning of what is the peak season for visitors.

However, I do not think that all is lost. A friend emailed me to ask me whether a couple she knows should go ahead with their planned trip to Tunisia this week.

My response to anyone who asks is that security has been stepped up at key locations, it is of course important to be vigilant, but Tunisia is still safe to visit. The couple decided to continue with their booking.

They mentioned that they would have encouraged people to go to London for example after the bombings there in 2006, and it would be hypocritical to treat Tunisia differently.

I have no doubt that other independent travellers will also continue to visit Tunisia, but historically the country has relied on mass tourism to its coastal resorts.

More than a million people are employed in the industry either directly or indirectly. The all-inclusive nature of many of these hotels means that often the local economy does not benefit as much as it should.

Tourism from cruise liners is also important; many of the victims of Wednesday’s attack were on day trips from ships which had docked close to the capital.

Italian company Costa Crociere is suspending its cruise liner trips to Tunisia for now. Other companies are expected to follow.

Things were already looking bad for the tourism industry. Before the revolution four years ago, around seven million people visited the country in 2010. Last year that figure had dropped to around six million.

In the past few years, the Tunisian authorities have been trying to appeal to those seeking a more cultural experience.

They have focused on advertising Tunisia’s ancient sites, as well as its unique desert landscape, which was the backdrop for several Star Wars films.

National Geographic Traveller listed the capital Tunis as one of its top 20 destinations for 2015. It talked of Tunisia’s “cultural energy,” festivals and yes, the Bardo museum, which is known for its range of antiquities.

It is significant that those that carried out this attack chose a museum and not a large hotel, which would also have been an easy target.

If the Islamic State of Iraq and the Levant is indeed responsible, it ties in with their targeting of cultural heritage sites in Iraq and Syria.

Many people have also been posting selfies, promising to visit the country this summer, with the hashtag #IWillComeToTunisia.

Tunisia desperately needs this show of solidarity to be followed up with action.

The authorities must also do everything in their power to reassure people that Tunisia is still a safe option for tourists. 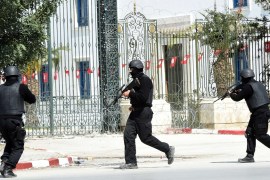