Baghdad – On Baghdad’s al-Mutanabi street, Iraqis mourned the destruction of 3,000-year old statues in Mosul almost as if they’d been alive.

“I’m so upset I can’t speak about it,” said an old friend, her eyes filling with tears.

The huge statues of winged bulls with human heads at the gates of Assyrian palaces are among the most iconic symbols of ancient Mesopotamia. Known as lamassu, they were meant as protective spirits. Their images are recreated on everything from copper plates to the walls of embassy buildings abroad.

The stone statues have guarded the gates of Nineveh in present-day Mosul since the palace was built in the 7th century BC. They stood during the sacking of Nineveh, the rise and fall of the huge Assyrian empire and all the empires that followed.

They stood while the palace was excavated in the 1840s and its treasures carried off to Britain and America. Last week, they fell to men with a power drill and a mission to eradicate every trace of Iraq’s pre-Islamic civilisation.

“Believe me, I couldn’t sleep all night when I heard the statues were destroyed,” said Abdullah Doshan, a self-taught sculptor sitting on the ground with a chisel and pieces of stone.

He said while in military service in the 1980s he would sneak a camera into the museum to take photographs. “I would go all the way to Mosul and visit the winged bull every day. People would say ‘is the statue your father?'”

The artistry in Assyrian stone carvings astounds sculptors today. Lions and gazelles seem to leap out of the walls. The stone curls of intricately-carved beards cascade down the chins of the lamassu.

“Look how symmetrical the beard is,” says Doshan, pointing to a photograph of the winged statue. “If you took a measuring tape you won’t find any discrepancy – they carved it hair by hair.”

The “cradle of civilisation” – the fertile land of ancient Mesopotamia between the Tigris and Euphrates rivers fostered the world’s first known cities. The first writing was believed to have developed here more than 5,000 years ago. Many Iraqis view those ancient achievements as their legacy.

Museum officials said four of the statues destroyed by ISIL were plaster copies while the rest were original. They said it was unclear how many of the 172 pieces at the museum had been destroyed or sold. The most valuable pieces in Iraq’s regional museums were sent to Baghdad after widespread looting of archaeological sites following the 1991 Gulf War.

Many of the museum staff are still in Mosul and unharmed. They have remained at home since ISIL gunmen took over the building in June, saying they were guarding it.

“All the Iraqi people, even the Mosul residents want to protest but they have no power. If they went out to protest they would be killed,” said Doshan.

Mosul, chosen by ISIL as the capital of its self-declared state, was traditionally a centre of commerce and culture – the most religiously diverse and one of the most sophisticated Iraqi cities.

The ruins of Nineveh, the capital of the powerful Assyrian empire, are within its city limits.

“Many of the best musicians of Iraq were born in Mosul,” said Saad Eskander, outgoing director the National Library.

“Apart from that, the most important historians came from Mosul, the first woman judge came from Mosul. Mosul provided the Iraqi army with a lot of officers and statesmen. Mosul was the important city in terms of the culture and history of Iraq.”

Just days before ISIL released the video of the destruction in the Mosul museum, reports surfaced that the group had burned the Mosul library.

At a temporary museum in Baghdad near al-Mutanabi street on the weekend, families strolled through a hall looking at black-and-white photographs of Assyrian and Sumerian artefacts.

Khaldoon Salem used to visit the museum when he studied at Mosul university. 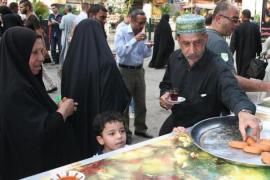 Iraq beefs up security in and around Baghdad amid growing fears of hundreds of sleeper cells.