Mbabane, Swaziland – Until last November, Rosemary Hadebe made some extra cash each month by selling clothes to her work colleagues at Tex Ray – one of several Taiwanese-owned textile factories in Manzini, Swaziland’s industrial hub.

For the past 12 years at the factory, Rosemary worked to strict quotas, sewing cheap clothing to be exported to the United States.

Her salary every two weeks of 575 Swazi emalangeni ($57), plus the extra money she made from selling clothes, which she bought from nearby Johannesburg, was just enough to keep her four young sons fed, clothed and in school.

But then in November, the factory closed. Rosemary and some 1,500 others were left jobless.

“Life was hard enough before,” Rosemary told Al Jazeera. “How much worse is it going to be now that I’m not working?”

Rosemary is one of thousands of textile workers left jobless following Swaziland’s removal from a US free trade bloc – the Africa Growth Opportunity Act (AGOA) – for consistently failing to meet its criteria on human rights.

If people come together they will discuss issues and join hands to advance their struggles. The government wants to ensure that unity is suppressed at all costs.

Factories such as Tex Ray that produce clothing for the US market are being forced to close or face running at a loss, as they now have to pay costly US trade tariffs, from which they were exempt under AGOA.

Labour unions say Swaziland’s exit from AGOA could cost up to 17,000 jobs – a huge number for a country of just 1.6 million people, 42 percent of whom are already unemployed, and with 63 percent living below the poverty line.

Swaziland’s textile industry is dominated by Taiwanese firms whose owners began coming to the country in the early 2000s when Swaziland joined AGOA, looking to take advantage of US free trade benefits, cheap labour, and generous tax holidays granted by the Swazi government, which also supports Taiwan’s bid for a seat at the UN.

While the Taiwanese firms have been credited with creating tens of thousands of jobs, they are also notorious for poor wages, neglectful health and safety standards, and abuse of workers‘ rights.

Today, Tex Ray – the factory where Rosemary worked – is all but deserted with just a few staff remaining to maintain the premises.

The overall number of people affected by the loss of AGOA is expected to be much higher than 17,000, as analysts say each textile job feeds an average of five people, such is the case with Rosemary’s family.

There are also concerns the workers, who were mainly women, will turn to prostitution to support their families, exacerbating Swaziland’s HIV rate, which is already the highest in the world, affecting about 24 percent of the population.

Rosemary said some of her colleagues are migrating to nearby Lesotho and South Africa to find work, something she refuses to do as without work permits, they are vulnerable to exploitation and violence.

US President Barack Obama first suspended Swaziland from AGOA in May 2014, after years of insufficient progress on meeting AGOA eligibility, namely, workers freedom of association and assembly – the right to join unions and to demonstrate without fear of harassment or arrest.

Swaziland is Africa’s last absolute monarchy, ruled since 1986 by King Mswati III – a flamboyant autocrat with 15 wives and a penchant for luxury cars and shopping trips to Europe – who exerts total control over the population.

Political parties are banned and Swaziland has long been criticised by human rights groups for violating freedom of expression, association and peaceful assembly by way of arbitrary arrests and imprisonments.

The same day that Rosemary lost her job, she and some others organised a mass prayer for the dismissed workers outside of the factory. Police arrived and quickly broke up the gathering, pushing organisers around and threatening them with arrest.

In March, The Nation magazine editor Bheki Makhubu, and human rights lawyer Thulani Maseko were arrested and subsequently imprisoned for two years for publishing an article that criticised the government. The incident is widely seen as one of the final straws regarding the AGOA.

“It’s like a military state here,” said Vuiyisile Hotshwego, 51, director of the Media Institute of Southern Africa (MISA), a media watchdog group based in the capital Mbabane.

Following Swaziland’s suspension from the trade pact, the government was issued a deadline with which to make amendments to legislation deemed by the US as repressive, including the “Suppression of Terrorism Act” of 2008, which effectively allows police to disperse demonstrators under the guise of security, and is blasted by critics as a tool to harass and detain activists.

In October, after little progress and sensing time was running out for Swaziland to be reinstated in AGOA, Secretary-General Wander Mkonze, 37, and other members of Amalgamated Trade Unions of Swaziland(ATUSWA) organised a march in the capital Mbabane, to try and pressure the government to act before it was too late.

The day before the march was set to take place, Wander said the authorities told him it was prohibited as it posed a risk to security.

The following day, Wander was arrested at his home and questioned for four hours after giving an interview to local media, in which he was quoted as saying: “We are at war with the police.”

Wander told Al Jazeera the reason the Swazi authorities are reluctant to address AGOA eligibility is because it conflicts with their interests – AGOA promotes freedom to organise, which the authorities don’t want.

“If people come together they will discuss issues and join hands to advance their struggles,” he said. “The government wants to ensure that unity is suppressed at all costs.”

Swaziland has been experiencing increased civil unrest since an economic crisis in 2011.

Observers say this is the result of better access to jobs, education and information, as well as the rise of democracy in neighbouring South Africa and Mozambique.

Petrus Qambukusa Magagula, a professor of political science at the University of Swaziland, said the loss of AGOA is going to increase tension as the government will have to introduce even more repressive measures that civil society – especially the youth – will not tolerate.

“There is real potential for serious civil unrest in Swaziland – the only thing I cannot put my finger on is how soon and when,” he said.

Swaziland officially lost its AGOA status on January 1, and Madagascar was reinstated after being removed in 2009 following a military coup.

Since losing her job at the textile factory, Rosemary has lived off of her 9,900 Swazi emalangeni ($860) severance pay, and has tried to eke out a living by hawking clothes full-time.

“The problem is, my best customers were my work colleagues,” she said. 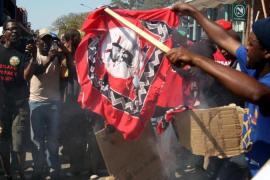 Country dropped from African Growth and Opportunity Act over its crackdowns on protesters. 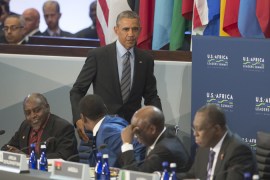 US-Africa summit: Leaders need to get their act together 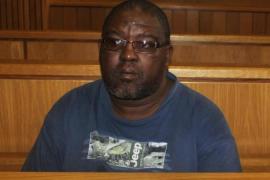 Judge jails editor and rights lawyer for two years over articles critical of government and judiciary to deter others.

Journalist and activist in jail for over 100 days for allegedly offending judicial system expected in court on Tuesday.