The Hague, Netherlands – When Dominic Ongwen appeared before the International Criminal Court last week he seemed like a much different man from the fearsome rebel fighter that he was for more than 20 years.

Ongwen, accompanied by two security guards, wore a dark-blue suit and a grey plaid tie. His movements were stiff and he spoke gently, using simplistic language.

For more than two decades, Ongwen fought in the Lord’s Resistance Army (LRA), a frightening militia led by Joseph Kony that seeks to establish a state in central Africa based on the Bible. The group is allegedly responsible for the deaths of more than 100,000 people and the abduction of 60,000 children in Uganda, South Sudan, Democratic Republic of Congo, and Central African Republic.

Ongwen – who is allegedly responsible for hundreds, if not thousands, of deaths – stood up, carefully folded his hands, and said in his native Acholi language: “First of all, I’d like to thank God for creating Heaven and Earth, together with everybody that’s on Earth.”

The abduction of young children and the coercion to commit atrocities, sometimes against relatives or other kids, results in a complete breakdown of the abductees' moral references and community ties... In this sense, Ongwen is clearly a victim.

When the accusations against him were read out, Ongwen – the first LRA member to appear before the court – listened closely but showed no emotion.

The charges he faces include war crimes and crimes against humanity, among them murder, enslavement and attacks on a refugee camp.

But it has been claimed that Ongwen is a victim, as well as a perpetrator, having been dragooned by the LRA to fight as a child soldier. Ongwen was reportedly abducted by the LRA at age 13 while on his way to school, though there are conflicting reports about how old he was at the time.

Because Ongwen was not strong enough to walk all the way to the LRA camp, he was carried on the back of older combatants, witnesses recalled in interviews.

Like tens-of-thousands of other children, Ongwen was trained to loot, shoot and murder.

According to LRA defectors, child soldiers such as Ongwen often witnessed or were forced to participate in executions of other children for reasons such as losing bullets, eating more than their portion of food, or dropping luggage on their long marches through the jungle.

“The abduction of young children and the coercion to commit atrocities, sometimes against relatives or other kids, results in a complete breakdown of the abductees’ moral references and community ties,” explained Patrick Vinck, a researcher at Harvard University focusing on mass violence in central Africa.

“In this sense, Ongwen is clearly a victim.”

On the other hand, Ongwen maintained and acquired a high level of autonomy and authority as an LRA commander, Vinck told Al Jazeera. According to the Rome Statute, the ICC’s founding treaty, obedience is not a defence when the defendant knew a given order was unlawful.

“So the question of Ongwen’s responsibility relies on how much he knew his acts were unlawful,” Vinck said.

Over the years, Ongwen rose in rank and became a senior commander in Kony’s inner circle. Reports indicate he played a leading role in some of the LRA’s most deadly attacks, such as the Makombo massacre in the Democratic Republic of Congo, where 321 people were killed in 2009.

In 2005, the ICC issued arrest warrants for five high-ranking LRA commanders, but 10 years passed until the first, Ongwen, appeared in court.

In January, Ongwen surrendered to the Seleka rebel group in the Central African Republic, which then turned him over to US Special Forces reportedly operating there. He was transferred to The Hague later in the month.

“There were reported cases of Ongwen contacting trusted individuals in Uganda, specifically inquiring about the ICC case against him and if it meant he would be killed, presumably because he was contemplating surrender,” said Poole.

Ongwen apparently challenged Kony’s leadership and consequently was placed under “house arrest” under the control of other commanders, Poole told Al Jazeera. He added Ongwen may have feared for his life, since Kony had previously killed other leaders over disagreements or mistrust.

Ongwen’s decision recalls the surrender of Bosco Ntaganda, a Congolese rebel commander nicknamed “The Terminator”, who in 2013 entered the US embassy in the Rwandan capital of Kigali and asked to be taken to The Hague.

He is currently awaiting the opening of his trial before the International Criminal Court in June.

Ntaganda, a defector from the Congolese army, was said to have led the armed M23 rebel group before clashing with other leaders in the movement. ICC judges in The Hague had issued an arrest warrant for Ntaganda in 2006.

“The ICC likely offered the safest option,” said Vinck. “Surrendering to DRC [Democratic Republic of Congo] forces would likely have resulted in his death.”

ICC: A deterrent or not?

In the cases of both Ongwen and Ntaganda, the main factor motivating their decisions was probably the lack of better alternatives.

“The ICC … provide[s] an ‘exit’ option that may be more acceptable to rebel leaders than local prosecution,” which may not offer a fair trial, said Vinck. “This [the ICC] may be a valuable contribution to ending violence.”

Nevertheless, some observers doubt the existence of the ICC is likely to have a major deterrent effect on rebel commanders such as Ongwen.

But Ongwen’s appearance in The Hague, which has been broadcast on television in Uganda, could have consequences for the LRA, said Poole of Invisible Children.

“Mounting doubt in the LRA leadership, and the understanding of what is available to them if they escape, are the factors most likely to lead combatants to defect,” he told Al Jazeera.

Of the five LRA commanders sought by the ICC, two have reportedly died and Ongwen has surrendered – leaving just two who remain at large – including the notorious Joseph Kony. 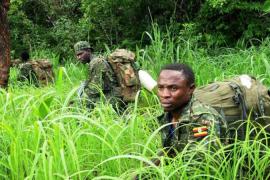 New report speaks of “steady increase” in attacks and abductions by armed group operating in jungles for three decades. 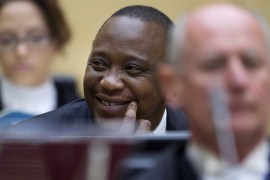 Is the ICC capable of delivering justice?

As Kenya’s president appears in the dock, we look at accusations the court is biased and incompetent. 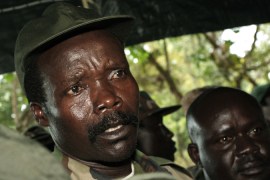 Dozens of women and children rescued from forests of northeastern DR Congo after clashes with rebels, Ugandan army says.