So there is a limit to the power of the English Premier League.

Indisputably the most entertaining, popular and money-spinning football league in the world, the world does not, it seems, revolve around it.

Fresh from a remarkable UK television deal worth $8bn, the EPL has been told it must fit in with the Qatar 2022 World Cup in November and December. At the Taskforce meeting in Doha, their voice, for once, seemed no more important than any other league or nation.

And maybe that’s just how it should be.

Let’s be clear on the EPL and churlish criticisms of it. Football changed, probably irrevocably, with the famous (infamous?) television deal at the start of 1990s that effectively married Sky and the sport.

We all tactically choose to forget this changed football for good as well as bad. I still love the thought of a 3pm Saturday kick-off, and am near emotional watching re-runs of matches from the late 1970s and 80s on muddy pictures with childhood heroes.

We all know football is trying to be a business but failing usually. The EPL is one of the undeniable business successes of Britain. Transcending sport and always managing to maintain the upper hand.

It has taken everyone involved a long way, particularly estate agents in the posh areas around Liverpool, Manchester and Surrey.

But their power does have a limit. The EPL ultimately comes under FIFA’s umbrella. And it is A football association, not THE football association. It is not a separate entity, not the NFL or the WWE. It is a league.
A powerful, thrilling, entertaining and rich league but just a league.

That’s life. Things change. I wish the peerless, wonderful Brian Moore was still alive and commentating on a match that cost five pounds that the working classes could afford. But a lot has happened since then and only part of it has been bad.

And so I believe Richard Scudamore has every right to stand in Doha and question the football calendar. Why should he do anything other than stick up for his league, and yes that happens to involve the traditions of English football.

But the EPL should accept something that should be blatantly obvious to all: Europe may have a loud and important voice, but it is not the only voice.

A gap in the English season is inconvenient to its main league. So what? They can play games between Christmas and the New Year and extend the season into the summer of 2023. Big deal.

It is so easy to lash out at Qatar, but on this issue its critics still refuse to play fair.

Why did FIFA not have, in its statutes, the right to play a World Cup outside of June and July in the first place? I have put this face to face to FIFA’s Sepp Blatter and General Secretary Jerome Valcke, suggesting current rules are misguided and discriminate against countries with high temperatures.

They have politely accepted it is a good question but they don’t have an answer.

The Qatar Supreme Committee bid for a World Cup that was slated for summer but that was not a crime. It should be moved to winter from the start. It’s still seven years away, enough time for the whinging one-eyed

British hacks (most of whom are male) to buy some sun screen for the ‘brutal’ temperatures in the low 20s.

This morning I was subjected to a couple of minutes of UK radio ‘debate’ about 2022. Apparently “Australia should have been awarded the World Cup because it needs to be taken to new territories”.

What? And what is exactly Qatar in World Cup terms? Maybe they hosted it once when I wasn’t looking?

But please don’t misunderstand my point. I’d love to see a World Cup in Australia at some stage. It’s just that, I accept that a World Cup in the Middle East is an important thing, the right thing. This is not just about Qatar. It’s an important point made repeatedly by 2022 Supreme Committee Chief Executive Hassan al-Thawadi.

Nobody needs to apologise it is not in a time and place to suit Europe and the EPL (where many clubs are financially backed in the Middle East). And no-one should.

From corruption allegations to the treatment of migrant workers, important questions have been raised over the last few years. But the issue of winter needs to be treated separately as a slow progression towards a sensible solution.

Winter of discontent? With apologies to that fine Englishman William Shakespeare: The European clubs doth protest too much, methinks. 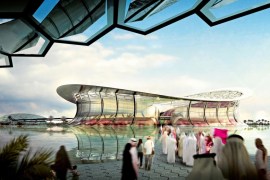 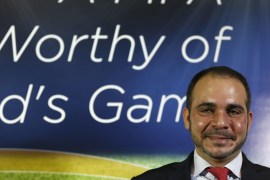 Prince Ali is one of three attempting to oust Blatter as Fifa president. The task is enormous.