The Islamic State of Iraq and the Levant (ISIL) group has released a video showing its fighters using sledgehammers to smash ancient artefacts in Iraq’s northern city of Mosul.

The five-minute video shows a group of bearded men in a museum using hammers and drills to destroy several large statues, including one depicting a winged-bull Assyrian protective deity that dates back to 9th century BC.

“Oh Muslims, these artefacts that are behind me were idols and gods worshipped by people who lived centuries ago instead of Allah,” one of the men tells the camera as he stands in front of the partially demolished winged-bull.

“Our prophet ordered us to remove all these statues as his followers did when they conquered nations.”

RELATED: ISIL’s war on art across the cradle of civilisation

Iraqi museum officials speaking to Al Jazeera confirmed the authenticity of the video.

ISIL fighters have occupied the museum since they took over Mosul last summer. But they had refrained from damaging the pieces, telling residents they were guarding the museum.

Museum experts said the statues now toppled to the ground included at least one plaster copy but the rest were original artefacts from sites including the Assyrian cities of Nineveh and Nimrud and the Greco-Roman site of Hatra.

The head of the United Nations’ cultural agency demanded an emergency meeting of the world body’s Security Council following the incident.

“This attack is far more than a cultural tragedy – this is also a security issue as it fuels sectarianism, violent extremism and conflict in Iraq,” UNESCO chief Irina Bokova said in a statement.

Later Bokova called on the International Criminal Court to look into the destruction of priceless artefacts.

“We are expecting some reaction from the International Criminal Court, it’s very important because it will mobilise a big part of the international community,” she told reporters in Paris, where the UN cultural body is headquartered.

ISIL has destroyed a number of shrines, including Muslim holy sites, in order to eliminate what it views as heresy.

The group is also widely reported to have sold ancient artefacts on the black market in order to finance their bloody campaign across the region.

The video, which bore the logo of ISIL’s media arm, was posted on social media accounts affiliated with ISIL.

Mosul, Iraq’s second-largest city, and the surrounding Nineveh province fell to ISIL in June, after Iraqi security forces melted away. 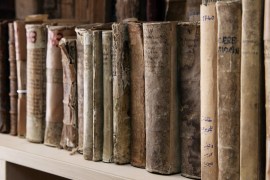 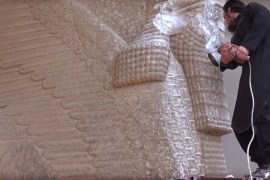 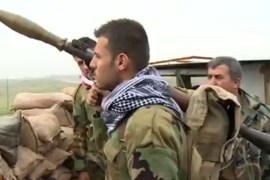