Eyl, Somalia – Hawa Mohamed Saeed recites a prayer in a barely audible voice as she waits for the phone to ring with news of her imprisoned son. This has been her daily routine for the past five years.

Dressed in red flowing garment from top-to-toe, Hawa, 80, paces gingerly back and forth in front of a white-washed stone house with a corrugated tin roof perched on top of a mountain in the picturesque town of Eyl, in Somalia’s northeast.

Colourful prayer beads play in one hand, an old battered mobile phone in the other.

The elderly woman is awaiting news of her son who is jailed in Yemen. Farhan Mohamed Jaama – a convicted Somali pirate serving life behind bars – hasn’t called in months.

Once in a while when the waiting gets unbearable, Hawa finds the courage to call him on the smuggled phone he hides, taking a chance the no-nonsense Yemeni prison guards won’t find him answering her call.

“He was a seaman just like most people in this town, he used to go out to sea and sell the catch,” Hawa told Al Jazeera. “Our life was good. He did not only provide for us, but also for his relatives who live in towns and villages far from here. He used to pay for their rent and school fees.”

Farhan is one of more than 200 men from this town who have been hauled off to prisons far from this Horn of Africa country.

More than 1,300 young Somali men have been jailed in prisons abroad for piracy since 2005. Most have been sentenced to life in jail.

Eyl – an ancient town sandwiched between the blue warm waters of the Indian Ocean on one side, and the rolling Nugaal mountains on the other – was until recently known as Somalia’s piracy capital.

This once well-to-do town has fallen on hard times. Eyl has paid the heaviest price, and continues to do so.

With the seas empty of fish because of toxic waste dumping and illegal fishing by foreign trawlers – and the soil too rocky and barren to support farming – residents have run out of ideas on how to support themselves.

They have exhausted all options. Prayers at the local mosque are all that is left in their armour. The abandoned crumbling homes are a clear sign that many have given up and left.

“Life has turned for the worst, first our central government collapsed, then the sea got polluted by foreigners using it as dump site that killed most of the fish,” Hawa said.

“Life became tough not only for us but most of the people in this town. Then the little fish that was left was swept clean by the trawlers – illegal trawlers.”

Out to sea, never to return

For many here, piracy was the only way out – the one path they could take to defend their ocean, and the little left in it.

“Before they emptied our sea, my son never owned or carried a gun. A fishing net was his only possession,” Hawa said, with Farhan’s grandmother – who has gone deaf since he was arrested – sitting beside her.

Everyone in this town of some 20,000 residents has been affected by piracy – and the world’s response to it.

Saadiyo Abdirahman is preparing lunch under a tree outside a two-bedroom house on the other side of the road next to a primary school.

Tears running down her cheeks behind her veil and her voice cracking with emotion, Saadiyo is still coming to terms with life without her husband, Abdirizaq Abshir – by all accounts a well-liked figure in this ocean-side town.

“He went to sea one morning, like every other seaman in this town, and never came back. The Americans took him,” Saadiyo told Al Jazeera. “I saw on the internet that they took him to a prison in their country. I have not heard anything from him, or from the Americans. That was six years ago. I read they sentenced him to 30 years in prison.”

The US State Department said it couldn’t comment specifically on Abdirizaq ‘s case, but noted more than 1,400 “pirates and suspected pirates are in courts or in prisons in 21 countries”.

“We can say that better prosecution of this crime has been an important component of our shared success against piracy in East Africa,” a State Department official told Al Jazeera in an email.

Saadiyo, who has given birth to seven children, was five months pregnant when Abdirizaq went to sea. She had a son who later died – her husband isn’t aware. Only two of their children are still alive today.

“Our children have it really tough, they are growing up not knowing their father. They worry for him. They are always asking me about him, but what can I tell them? When he comes out, the youngest of our surviving children will be 32-years old,” Saadiyo said.

Those who have family members in prisons abroad are calling for them to be repatriated so they can serve their sentence in prisons in Somalia. That way, they say, they can at least maintain relations.

“If Americans are human beings they will send him to serve his term in a Somali prison. At least his children could go see him if he was in a prison in Somalia,” Saadiyo said, her veil wet with tears.

Saadiyo’s view has been gaining momentum in Somalia with increasing numbers of influential people calling for pirate repatriation.

The town’s mayor – a vocal anti-piracy campaigner who advocates for tough sentences – surprisingly shares her view.

“First, we have to remember these guys are criminals and they broke the law. That’s why they are prison,” Muse Osman, mayor of Eyl, told Al Jazeera.

“But we now have the ability to put them in jail. Our correctional facilities have many pirates already serving time. We can house many more.”

Inflation in Eyl is sky-high after millions of dollars flooded in as ransoms were paid for hijacked ships.

Basic goods became prohibitively expensive for locals. Some traders cashed in as loaded pirates returned after successful hijacks. But that was then, this is now.

With few pirates left after the international crackdown, it’s hard to find goods here. The once busy restaurants, tea stalls, and guesthouses are either empty or padlocked.

Abdiaziz Ahmed is a trader of khat – the leafy narcotic chewed in this part of the world, and one favoured by the pirates. With the ocean buccaneers either gone or in prison, his trade is hurting. He has been in the business for more than 15 years and told Al Jazeera this is the worst time he has experienced.

“A kilo of khat used to be $15. Then the pirates came and the prices went up to $50. That was good for us. Now they left and the locals cannot afford it.”

Still waiting for her son to call, Hawa said the international community doesn’t care about the fate of Somalis here.

“They don’t care if we starve to death – that is what they prefer. They will never arrest anyone for fishing illegally in Somali waters but will arrest anyone for taking a gun to fight the trawlers,” Hawa said.

This story was updated with comment from the US State Department 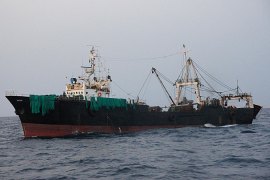 Somalia cracks down on illegal fishing 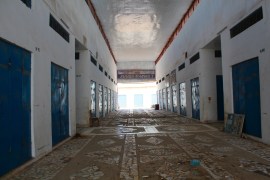 Once a bustling haven, Elasha Biyaha has almost become a ghost town as residents flee. 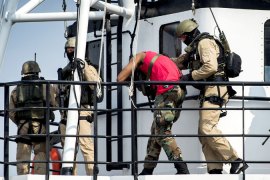 The human cost of piracy

A new report sheds light on how rising piracy affects not only ships and their cargo but the crews and their families. 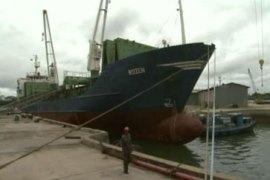