Sixteen-month-old Ezzedin Jad al-Kafarneh died as a result of an electrical fire at an UN school in the north of the Gaza Strip.

“On February 16, UNRWA staff discovered smoke coming from a closed room at a Collective Centre in Beit Hanoun. Preliminary reports indicate that one infant died and two others were injured, reportedly as a result of the fire,” a spokesperson for the United Nations Relief and Works Agency (UNRWA) told Al Jazeera.

Ezzedin and his family had been living in the school since the family home was destroyed during last year’s 51-day war in the Gaza Strip, which ended when a truce between Hamas and Israel was agreed to last August.

Four infants died from complications caused by the bitter cold in Gaza in January... All were from families whose houses were destroyed during the last conflict and were living in extremely dire conditions.

UNRWA currently shelters more than 10,000 men, women and children in 15 schools, which are severely overcrowded and have poor sanitation.

More than five percent of Gaza’s total population was made homeless in 2014.

Those made homeless when their houses or apartments were destroyed by shelling, are now either staying with relatives, crammed into UNRWA shelters or suffering the harsh conditions of life under tarpaulins and tents.

Six months after the ceasefire, more than 100,000 Palestinians remain living in temporary structures and accommodations. Matt McGarry, is Catholic Relief Services’ (CRS) local representative. CRS has built 70 single-storey wooden temporary homes in Khan Younis, a town in southern Gaza which was heavily damaged in the July-August war. It has funding ready to construct 100 more.

“We designed the transitional shelters without any dual use items so that within the existing restrictions, we could get as many vulnerable families as possible out of the elements,” McGarry told Reuters news agency.

“It is only temporary,” said Maryam Baraka, 58, sitting on a plastic chair outside the shelter which now houses 13 members of her family. The rubble of their two-storey home has not been cleared away since it was destroyed. The family has no idea when their home may be rebuilt.

In this environment, accidents and fires involving heating elements, such as the one that killed Ezzedin, are becoming more regular. Lack of electricity and bitter cold are forcing families to use open fires, candles, or unstable cooking elements.

Al Mezan Centre for Human Rights documented the deaths of two children killed in January after a lit candle engulfed their room in flames. Their mother had lit the candle during one of Gaza’s regular electricity cuts.

No health and little safety

Accidents are more likely to happen when severe overcrowding is an issue. This has been the case for decades in Gaza where 1.8 million people, the majority refugees, live in an area half the size of Singapore. But with families doubling or tripling occupancy in homes, it is more at risk than ever before.

Since the start of the fuel crisis, a result of the seven-year siege of Gaza, Al Mezan has recorded an increase in the numbers of deaths and injuries due to fire-related accidents.

From the start of 2012 to November 2013, the centre documented 16 deaths, including 14 children and nine people injured as a result of fire accidents.

At peak fuel times, households in Gaza have been receiving electricity for eight hours at a time. When the lights go out they switch to generators – if they can afford them.

Dr Nafez Abu Shaban, head of the burns unit at Al Shifa, Gaza’s main hospital, told Al Jazeera he has seen an increase in patients admitted to his unit.

“Not only because of winter but also because of the electricity crisis, people are using primitive heaters and stoves which cause fires.”

Figures collected by Al Shifa hospital show that two-thirds of those admitted for burns are children and 96 percent are for injuries caused by accidents in the home.

Even as open fires and poor electrics pose a risk for displaced families, icy and damp conditions continue to claim young victims of hypothermia.

“Four infants died from complications caused by the bitter cold in Gaza in January: four-month-old Rahaf, one-month-old Adel, three-month-old Salma and 18-month-old Fadi. All were from families whose houses were destroyed during the last conflict and were living in extremely dire conditions,” Catherine Weibel from UNICEF told Al Jazeera.

Currently homes receive electricity for four hours at a time in 12 to 18 hour cycles. Israel continues to limit the flow of building materials and goods into Gaza.

Items listed as “dual use” in the report refer to products which the authorities in Israel consider have a potential for military purpose and include: steel, concrete, cement, beams, plastic panels, and construction vehicles.

Chris Gunness, UNRWA’s official spokesperson told Al Jazeera of his frustration at the delay in pledged funds as yet not being received:

“It is appalling that UNRWA is having to suspend the reconstruction and repair project. We have an initiative which was $720m and that is about $585m in the red. Little wonder that the day after we made this announcement the UNSCO [Office of the United Nations Special Coordinator for the Middle East Peace Process] was attacked because there is a lot of frustration.”

According to Israeli human rights NGO, Gisha, 194,404 tonnes of material had entered Gaza, as of December 2014. To put this into context, five million tonnes of materials will be needed to rebuild the Gaza Strip and rehouse all those displaced by the long-term conflict. 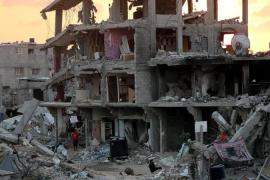 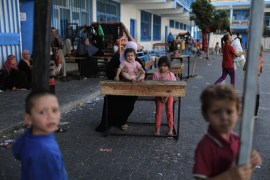 As shelling in Gaza rages on, thousands of residents have fled their homes in search of safety inside UN schools. 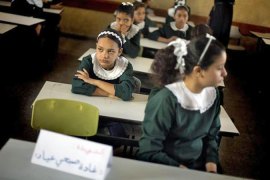