Mumbai, India – When one of her relatives became sick with the swine flu virus recently, Preeti Muley raced with her family to get the H1N1 vaccination.

But the 26-year-old was too late – two days later she came down with a 38.3 degree Celsius fever and body aches, and within two days her doctor confirmed she had been infected.

Unfortunately, a diagnosis wasn’t enough. After her physician wrote a prescription for the antiviral Tamiflu, Muley said her family ran into roadblocks at several hospitals that weren’t carrying the drugs. Finally, after several distressed phone calls to major hospitals in Mumbai, her mother was able to get the tablets at Kokilaben Hospital, a large private facility in Mumbai.

“You never think it will happen to you,” Muley, an interior designer, said wearily over the phone from her home in Andheri, a suburb of Mumbai. With one day’s worth of medication remaining, she rested in isolation to prevent others from catching the highly contagious, and sometimes fatal, virus.

Swine flu has killed an estimated 750 people with more than 11,000 testing positive since the beginning of January, according to health officials. Most of these cases were reported in the last three weeks, and the numbers are especially high in states such as Rajasthan, Gujarat and Madhya Pradesh, in central India.

The Indian government has been vocal, but measured, about the growing number of cases and deaths: The health ministry announced it will take action against pharmacies that don’t stock Oseltamivir, the common swine flu drug, and has sent teams of doctors to highly infected regions.

In a recent statement, Health Minister JP Nadda said the situation was already getting under control, and cited ample access to the necessary drugs across the country.

But doctors, patients and public health advocates say the situation on the ground is much different – a reflection of India’s bureaucratic and unregulated health system.

“They’ve made it very hard for people to get the prescription filled,” said Dr Hemant Thacker, a physician at Jaslok Hospital, a pristine private hospital in south Mumbai. He said getting the Oseltamivir treatment, a generic drug also known as Tamiflu, requires three pages of paperwork, and that’s when people can find it.

While numerous patients such as Muley have reported trouble accessing the medication, it’s not because there’s a shortage of drugs. Nadda said India has enough adult doses of Oseltamivir to treat 70,000 patients, and national manufacturing companies such as Cipla can make generic versions of the drugs on demand.

Even so, Dilip Gupta, a senior pharmacist at Jaslok Hospital, said the hospital hasn’t been able to order the antivirals in bulk because of government restrictions and licensing issues. Instead, they order them from Kasturba Hospital, a dusty, sprawling government facility in central Mumbai that is a designated site for swine flu patients, especially those who can’t afford private care.

Dr Mangala Gomare, an epidemiology officer with the Mumbai municipal corporation, maintained that patients had plenty of access to medicines and care in the city, which has become a landing pad for those in surrounding states with fewer facilities.

So far, 114 swine flu cases have been reported within Mumbai, and 47 patients have come from out of state. Gomare insisted both public and private hospitals were equipped with the beds and drugs needed for the patients.

“We are quite prepared this time,” she said. “People are aware, they’re getting information from the government.”

In India’s often-unregulated health sector, this kind of disconnect between resources and access is common, according to a report by McKinsey and Company, a global consulting firm.

The country grapples with huge gaps in health infrastructure and spending, and many primary care clinics – meant to be the first line of screening for viruses such as swine flu – are understaffed and sparse.

Gupta is based in Rajasthan, where swine flu incidences have been escalating quickly, although many are under-reported. He predicted there were as many as double the swine flu deaths than officially tallied, since many cases could have gone unscreened in remote and rural areas where the government health system often fails to reach.

Those incorrect numbers, Gupta said, further strain the actual medications and drugs needed for swine flu patients across the country.

“They might have stock, but the distribution is skewed,” Gupta said. “There’s no system of reporting to actually know the gravity of the problem.”

The lack of dependable numbers might be part of why information about swine flu prevention is failing to reach patients in time.

Mumbai resident Nishant Nagpal tested positive for swine flu last weekend after a visit to the doctor for a high fever and throat infection. His family paid $80 for his blood test – above the government-mandated cap of $72 – and found out he had the virus within one day.

Since Nagpal’s father had swine flu a few years ago, he said there wasn’t much panic at home, where he recovered in isolation after a few days of medication. But it wasn’t until he was sick that he started to notice a surge of headlines about swine flu in the news.

“There wasn’t much hype until the week I got it,” he said.

Luckily, doctors and advocates say, the government tends to respond a little bit faster when there is some “noise”, including media coverage. And while most agree that India is better prepared than it was during the first outbreak in 2009, it’s clear there’s more work to be done.

“I keep saying, make it easier for the sick,” Thacker said in the lobby of Jaslok Hospital. Then he walked off to prepare for another full day of patients. 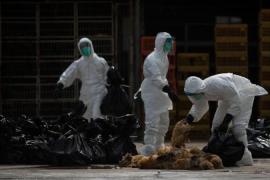 A new bird flu virus has jumped from birds to humans, as a regional ban on chicken sales continue. 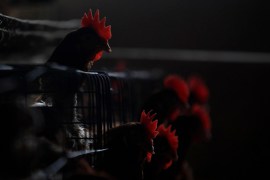 Scientists are scrambling to find the origins of new H7N9 strain that has killed more than 20 and continues to spread.