From being punched in the face outside his synagogue in an unprovoked attack, to being verbally threatened and pelted with eggs, the rabbi has experienced the all-too ugly side of British society.

“I’ve also had the word ‘Jew’ written on the frost on my car on a winter’s day. Our local cemeteries have been vandalised by swastikas and tombstones have been smashed,” Saunders, from Manchester, England, told Al Jazeera.

“There’s been the odd real act of violence too, when somebody was hit over the head with a baseball bat.”

In a country that prides itself on its religious tolerance, the rabbi’s accounts may come as a shock to most Britons – but are sadly nothing new. According to figures released earlier this month, the number of anti-Semitic incidents in the UK reached the highest level ever recorded.

The Community Security Trust (CST), a Jewish security charity, recorded 1,168 anti-Semitic incidents – including verbal abuse, property damage as well as violence – against Britain’s 291,000 Jews in 2014, against 535 the year before.

There are indeed those who are looking at the situation now, and deciding it might be time to leave before they feel they would have to escape in a hurry.

In the wake of the anti-Semitic killing of four people in Paris last month, and against the backdrop of such statistics, some from within Britain’s Jewish community have even begun to question their presence in the UK.

Acclaimed British actress Maureen Lipman was one high-profile figure to have recently revealed she was contemplating leaving the country for either the United States or Israel such was her dismay at the UK’s spike in anti-Semitic behaviour.

Jonathan Sacerdoti, director of communications for UK-based Campaign Against Antisemitism (CAA), told Al Jazeera such feelings, while not as pronounced as those attributed to Jews living in France, were definitely gaining traction in Britain.

“There are indeed those who are looking at the situation now and deciding it might be time to leave before they feel they would have to escape in a hurry,” he said.

“Some who we speak to have said they are planning to move now while they can do so in a calm and measured way, because they fear that in future the climate in the UK might be less accommodating of Jewish life.

“It is certainly my hope that we can turn the tide of anti-Jewish incidents and attacks, and make Britain somewhere Jewish people feel safe to live, so that nobody even considers the prospect of having to leave.”

In January, the newly established CAA published two sets of findings of their own, the first surveying the attitudes of 3,411 British adults towards British Jews, the second recording the feelings of 2,230 British Jews themselves.

Both sets of results made for worrying reading, with the latter finding more than 50 percent feared they had no future in the UK, and one-quarter had considered quitting the country in the past two years.

While the more established London-based Institute for Jewish Policy Research criticised the CAA’s report for being “littered with flaws”, Sacerdoti insisted the study was “thorough and professional”.

“The vast majority of the feedback we have received from the Jewish community has been entirely positive regarding this work. Similarly, it has been quoted at the highest levels of government, and in the international media,” said Sacerdoti.

With these figures and with increased security at Jewish schools, synagogues and cultural centres across Britain, fears for the long-term future of Britain’s Jews appear justified.

Yet, for many at the forefront of the country’s Jewish community, such fears are to be seen in context.

“Last Summer [during the war between Israel and Hamas] there was a rise in anti-Semitic incidents [in Britain] – that means verbal and daubing – but the level of violent anti-Semitism is very low,” said Rabbi Laura Janner-Klausner, the senior rabbi to the Movement for Reform Judaism in London.

Rabbi Janner-Klausner told Al Jazeera while this rise in incidents was disquieting – the outcry expressed by both politicians and mainstream British society reflected genuine concern for the country’s Jewish minority.

“There are individuals who don’t like Jews, but just the fact that the government is so bothered about it [reveals that] people really care about this,” continued the rabbi, referring to both the UK home secretary’s concerned public response and the work of the All-Party Parliamentary inquiry into anti-Semitism.

“You know that if people don’t care about something it just gets swept aside. So, the amount of care that is being taken in response to this concern is brilliant.”

That said, how safe do Jews feel on Britain’s streets day-to-day?

Like Rabbi Janner-Klausner, Keith Kahn-Harris also refutes any suggestions of Britain being an anti-Semitic country and “in general terms … feels perfectly at ease in [the UK]”.

“I certainly don’t feel I’m experiencing discrimination or anything like that,” the sociologist and guest editor of the Jewish Quarterly told Al Jazeera.

“What I do feel is that there is a risk from a tiny minority of assaults on Jewish buildings and events, and because I spend a lot of my time in those contexts, yes there is a threat. But, I think it’s a threat that comes from a small marginal minority… It’s a manageable risk.”

Committed Manchester United fan Rabbi Saunders is equally committed to remaining in Britain – despite his violent and abusive experiences.

Aware of a few high-profile cases of Jews indicating their wish to leave British shores, he is fairly relaxed about the long-term future of a population that has been a thriving part of British society for generations.

“Yes, people are starting to look over their shoulder – but I don’t think at this moment in time most people are,” stated the rabbi.

“There are a few [who might be thinking of leaving the UK] – but some might be thinking about doing it for other reasons. They might have family abroad. Whether it’s Israel or America it’s a free country and if people want to leave for personal reasons that’s fine.

“But, if they don’t want to leave for any other reason than just [because of this rise in anti-Semitic incidents], then that would be a great shame.” 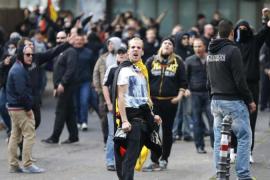 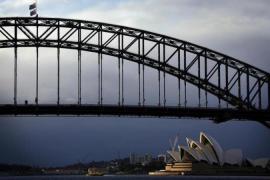