Pisky, Ukraine – The road to Debaltseve was shrouded in frozen fog. Every few minutes a car would pass in the other direction, too many passengers stuffed in the seats, faces nervous.

Ahead, nothing was clear – not the road, neither the future.

Just north of Luhansk, grey figures began to appear on the road – soldiers kicking around a football on the broken asphalt, shuffling to keep warm. Through the saplings on the side, smoke rose from a fire where Ukrainian army engineers grilled chunks of pig fat and sausage.

They waited for orders.

On February 12, a grizzled Petro Poroshenko, Ukraine’s president, and Vladimir Putin, Russia’s leader, hashed out a peace deal in Minsk, Belarus. Now, soldiers on the ground were to carry it out. But their mission seemed unclear.

“That’s a mine clearing vehicle over there,” one soldier said, pointing to an armoured personnel carrier.

“And those lay down mines,” he said, pointing just up the road at a line of similar vehicles. As he spoke, a column of dented army trucks drove by carrying stacks of thick pine logs, such as those used to reinforce entrenched positions.

Today, the ceasefire is a truce in name only. With the capture of Debaltseve a few days ago, Minsk II has gone the way of its predecessor as fighting continues to rage along the front.

Kiev said on Friday the rebels had fired on their positions 302 times since the truce began a week ago, and rebel tanks were spotted moving in the region of Mariupol, the largest government-controlled city in the embattled provinces.

“No one believes in this truce. No one believes Putin will honour it,” the soldier said, as he lit a cigarette and Grad rockets rumbled in the background.

The bigger problem for Poroshenko is not that his soldiers do not trust Putin, the problem is many do not trust him, their leader. Particularly those in the many volunteer battalions in the trenches along the front.

The defeat and retreat from Debaltseve was confirmation for many that Minsk II was a capitulation and a betrayal of the ideals many forged during demonstrations and fighting at Maidan Square in Kiev.

Poroshenko spoke Friday at Maidan, honouring the one-year anniversary of the death of dozens of civilians killed during the fiercest part of the protests.

The debacle at Debaltseve can only have strengthened Putin’s hand – and the belief of nationalist volunteers here that they are being betrayed.

The night the ceasefire was announced, the volunteers of Dnipro-1 Battalion were livid.

Coal smoke flooded the cramped basement of the wrecked house from a broken stove, but the men did not seem to notice.

All of their attention was absorbed by the news playing out on the battered television set up in their makeshift headquarters in Pisky, the suburb that remains a front line despite efforts at a ceasefire.

As mortars and rockets smashed into the abandoned houses outside, the men shouted at the fuzzy images on the screen, cursed Poroshenko and Putin, and argued among themselves as they learned more about Minsk II, an agreement meant to halt the fighting that has killed more than 5,000 people.

Because Pisky is so close to Donetsk and because of weak mobile phone coverage, the only news the volunteer fighters get is from the government news agency of the Donetsk People’s Republic – the group the men are fighting to destroy.

The men stood around smoking and watched as the Donetsk channel broadcast coverage of the protocol, which included provisions for a ceasefire starting at midnight on February 15: withdrawal of artillery; monitoring by Organization of Security Co-operation in Europe workers; amnesty for those involved in the fighting; exchange of prisoners; safe distribution of humanitarian aid; payment of pensions; withdrawal of “foreign armed formations”; and constitutional reform.

“We have arms. We have the desire. We want to take Donetsk and then on to Moscow,” said Roger, giving the name he uses in the platoon, while disregarding the television. The volunteer fighter sported a mohawk and said he has been fighting since the protests erupted early last year, which led to the war.

“The government will not let us fight our way into Donetsk. If the government and the Ministry of Defence allowed us, we would do it immediately.”

Outside, the thump of artillery gave weight to his words as Ukrainian regular army forces – who have no access to the press – pounded rear rebel positions, and possibly Donetsk itself.

The war here looks like something from World War I. To get to their positions the men take a slow stroll past heaps of garbage and broken masonry.

Suddenly they break into a wild run.

Fearing snipers, they sprint in full body armour across the strategic main road – it runs through the middle of the village and into Donetsk.

Blindly into the night

Inside the makeshift bunkers the temperature is freezing cold, they are mostly built from empty wooden mortar boxes filled with dirt, logs and trash scavenged from the battlefield.

Irakes, a young volunteer who got a concussion from government grenades during the demonstrations at Maidan, said the nights are filled with explosions, shooting, and the barking of homeless dogs.

Here the fighting resembles something from 1915, not 2015. When the sun comes out, mud clings to boots, trousers, and rifle barrels.

The fighters like the cold since it keeps them clean.

Over the mud lip of the trench is no-man’s-land.

Some 300 metres down the road are rebel positions and, surreally, what some say is a different country.

Sometimes a volunteer will inch up the bank of dirt and squeeze off a few rounds, or walk boldly out to a disabled Ukrainian armoured vehicle to fire heavier weapons.

Peering through breaches in the walls, the men fire heavy calibre machine guns blindly into the empty houses in “preventative” sprays every few minutes.

On one occasion, rebel artillery crashed accurately into a half-destroyed government building nearby, raising great towers of black earth, bricks and smoke.

Ronich, the artillery commander in Pisky for Pravy Sektor – a right-wing nationalist movement that has played a prominent roll in the conflict – took a jeep to a mortar position in a school yard. As he drove down a bumpy road torn up by tanks, it became clear shells have hit every house in the village.

“You can tell when the Russian ‘humanitarian aid convoys’ have come into Donetsk, because there is always a big increase in shelling afterwards,” said Ronich.

“In the past few months their artillery has become much less random and much more accurate. They no longer just shoot into the houses, now they only do it if they have a target,” said Ronich.

He said there are rumours that Russian soldiers have replaced rebel mortar crews and they now have radar to track Ukrainian positions.

And it is artillery that is wreaking the most havoc on the civilian population caught in the middle.

Machine-gun fire and the dull explosion of mortar rounds can be heard down the street, but Ivan does not seem to notice. He, his wife, and his nine-year-old son Danil have stayed in Pisky through all the fighting.

They are the only ones left living on their street. All of their neighbours have been replaced by Ukrainian battalions living in the basements.

“Our next door neighbours left a few weeks ago after their house was shelled. Now we are the only ones left,” said Ivan.

The brown bricks of his small house are chipped and pocked where gunfire smacked into them.

Ivan and Danil no longer even duck.

None of the boy’s friends are left and he laughs in a strange way when he watches homeless dogs fight in the street.

“It was really funny. One time a shell came crashing into the courtyard and Danil dove for cover. I sat where I was at the dining room table and told him that he didn’t have to find cover until I told him a shell was coming our way,” Ivan said.

It is hard to say whether he is shellshocked, or pragmatic and resigned to his fate.

“They say we should go to Ukrainian-controlled territory, but the rebels are even shelling nearby towns, so what is the difference,” Ivan said.

Dmitro Yarosh, the head of Pravy Sektor, posted on his Facebook page what could well be the epitaph of a ceasefire that is collapsing across the front.

“With the Russian Federation and Putin no agreement is possible,” he said. “They will never be respected.”

Well-armed, well-motivated and angry at both Putin and Poroshenko, it seems unlikely the fighting will stop. 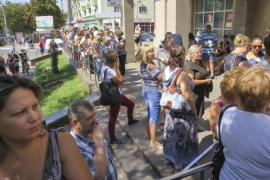 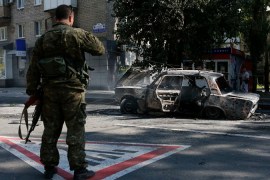 Local mayor says pro-Russian rebel forces now in resort town of Novoazovsk, which could give them control of Azov Sea. 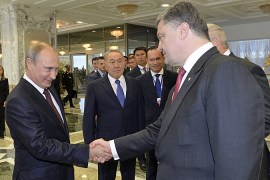 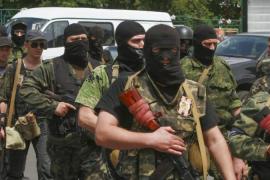