Here in Baghdad, Jordan’s actions against ISIL have been watched with great curiosity and intrigue. Many thought that the killing of the Jordanian pilot at the hands of ISIL in such a brutal manner would paralyse the Jordanian establishment. Surprise then that it actually spurred the Jordanian‎ government on to decisive action.

Foreign Minister Nasser Judeh was blunt while speaking to local media in the capital, Amman: “This is a fight against people who are distorting our religion.”

In the last 10 days or so, the Jordanian air force has destroyed more than 56 ISIL targets in Syria, and has put the group under tremendous pressure.

But Jordan faces a problem. Its air force is old, and its main fighter jet system, the F16, has been in service for at least 25 years. The bombs that are being used ‎against ISIL targets are older versions and are being referred to by experts as ‘dumb bombs’.

Jordan’s neighbour, Israel, doesn’t have such problems. Its weaponry has been maintained and updated by the US, thanks to something called the ‘Qualitative Military Edge’ policy.

That’s a decades-old agreement to help secure Israel’s future as a Jewish state. It was enshrined into the US law in 2007 and is perhaps the largest contribution of any kind that the US makes to Israel.

Under this policy Israel receives the latest technology and regularly engages in military exercises with the US. Other countries that receive large amounts of US military assistance include Iraq, Afghanistan, Pakistan and Egypt, but imports of military hardware fall far short of the standard Israel receives.

However, some US politicians are wondering whether things have changed in the Middle East to widen and upgrade help to other countries, according to media reports citing a letter from members of the Senate Armed Services Committee to Secretary of State John Kerry and outgoing Defence Secretary Chuck Hagel.

“The US should immediately step up supplies to Jordan. Jordan is now the lynchpin in the fight against ISIL. We need a billion dollars in immediate assistance, weaponry and new aircraft. We also need smart bombs and drones which the US have consistently refused to give us, which have two key attributes: one for intelligence gathering and [the other] for striking fear into the enemy once they fly overhead,” he said.

As he speaks, I sense a calm ferocity in his voice – the memory of the Jordanian pilot murdered by ISIL clearly still fresh in his mind. I ask him what he would do with increased military assistance.

“So far the air strikes have been piecemeal. What is needed is a tsunami, a thunderstorm of strikes and, like I say, we need the latest weaponry and assistance to be able to do it.”

US officials have publicly said they will try and speed up delivery of weaponry to Jordan, whose actions have been praised by military officials and politicians globally. ‎But is there an appetite to give Jordan the sort of support Israel gets from the US? To expand the ‘Qualitative Military Edge’ policy?

Mark Perry, a military intelligence and foreign affairs analyst, says: “It’s possible we could increase assistance to Jordan but it won’t be largesse. If ISIL makes gains against Jordan, the US will have to act. We won’t let Jordan destabilise. ‎We might not give them as much money or assistance as Israel – Israel will always get more – but we could up our contribution.”

So far it is caution that seems to be guiding US policy towards Jordan, but part of the equation must be Israeli reaction to any upping of military assistance.

Asaf Ronel is the world news editor at Haaretz newspaper in Israel. He says that any assistance to Jordan would never match that given to Israel.

“The establishment here is always considering the possibility that the Hashemite regime will fall, and the upheavals in the area in recent years only made that fear more present. In that case, Israel fears that the advanced weapons Jordan will receive might fall into more hostile hands.‎”

Perhaps bigger than that concern is possible reaction from the Israel lobby within the US. Mark Perry, once again, gives me his thoughts.

“I think the response to increased assistance from Israel will be muted. There is a strong relationship between [Israeli Prime Minister Benjamin] Netanyahu and the King of Jordan and the Israelis are adults. They can read a map as well as anyone. The bigger concern will be Israeli supporters in the US, who can be more Israeli than the Israelis who will cause a huge fuss and that’s a problem.”

The ‘Qualitative Military Edge’ doctrine has served Israel well over the years. It has given the tiny state one of the best equipped and capable armies in the world. But if ISIL destabilises Jordan, the threat comes closer home.

This potential threat requires more than just loyalty to one country in the Middle East, and a much more nuanced approach.

The US must bear some responsibility for the rise of ISIL. Before its invasion and occupation of Iraq, the group did not exist. Jordan for 11 years has felt the blowback of the Iraq invasion. But let us put Jordan to the side for a moment.

US support to Iraq has been criticised by many – both here in Baghdad and abroad that it is inadequate and is one-sided. That Iraq buys weapons from the US but gets very little political support in return.

Now that President Barack Obama has asked Congress to authorise more war powers, there is concern that any engagement will be open ended and spiral out of control. There’s already a feeling amongst Iraqis that the US is re-engaging in Iraq to benefit its own defence industries rather than benefiting the region. Or to stop ISIL. Getting over that will require careful diplomacy and handling of the message the American administration sends out.

Those concerns must be addressed in the future. Right now the question the US must ask itself is: How big a price is Jordan’s help in fighting ISIL worth? Right now the fight against ISIL means that Israel, Jordan, Saudi Arabia, Turkey, Iran, Iraq and the Syrian regime’s interests have converged. Does this rare convergence of interests provide an opportunity?

One estimate suggests that Jordan needs $5bn in the 12 months to be able to continue its fight against ISIL.

To put that into context. It has cost the US more than $100bn since 1962 to arm Israel. What is the price for the defeat of ISIL? Without a political solution in Syria, is the money simply a short-term stop gap or a long-term solution?

Jordan says it has bombed ISIL 56 times in three days

As targets in Raqqa are hit, head of air force says his country is determined to wipe ISIL “from the face of the Earth”. 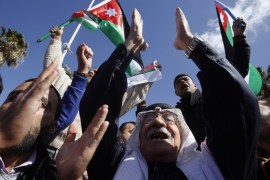