Istanbul, Turkey – An independent art initiative has been functioning as a hub for Syrian artists in Istanbul who have fled the war in their home country.

Omar Berakdar, who founded the Arthere initiative, said the goal is to give refugee artists the means to continue practicing art, so they are not forced to switch to another job simply to eke out a living.

“Arthere is about art and only art,” Berakdar told Al Jazeera.

The 51-year-old photographer from Damascus moved to Istanbul in 2012 and began working with an NGO to help newly arriving Syrians integrate into life in Istanbul. But he soon decided to shift his focus.

“After a period of time, as an artist, I wanted to focus on art, and help Syrian artists. The NGO I worked with was very much involved with politics,” Berakdar said. “So I left the NGO and formed Arthere to gather Syrian artists and help them start practising their work here in Istanbul.”

Established in December 2014, Arthere is located in the culturally rich Kadikoy district on the Asian side of Istanbul. It includes art studios, a cafe and an art gallery, which features the work of Arthere’s members and guest artists.

Artists can come to Arthere as guests and use all the facilities, including a darkroom, a painting studio and carpentry workshops. The organisation also helps artists integrate into life in Istanbul.

“It was difficult to adapt to Turkey for me,” Berakdar said. “Language barriers and cultural differences were not easy to get over. It is not easy to live here as an immigrant, let alone being an artist.

“When you leave your country because you have no other option, a part of you stays back in your country – and adapting gets harder as you did not move to the hosting country willfully.”

Zolfaqar Shaarani, a 34-year-old painter from Damascus who attends Arthere, says Istanbul is a great spot to be an artist.

“When Omar told me about the project, I wanted to be involved in it right away,” Shaarani told Al Jazeera. “I did not experience much hardship or problems with blending into Istanbul, as I was involved with Arthere right away… My art is highly influenced by history and philosophy, and Istanbul is so rich in these.”

Through Arthere, which is financially independent, artists sell their work directly, contributing to the organisation’s income. Occasional art courses offered at Arthere also help to maintain the project’s financial sustainability.

In addition to Syrian artists, Turkish and expat artists also started coming to the centre, Berakdar said: “They are welcome here to promote artistic and cultural exchange.”

In recent months, the art centre has also started organising pro bono concerts by local musicians to promote further interaction with the local community. Oyku Dogan, a Turkish member of Arthere, helps to organise these concerts and acts as a general liaison between Arthere and Turkish artists.

“This place was started by Syrian refugees, but it is not about the Syrian issue. It is about art and aims to help create and promote the work of Syrians and other artists,” Dogan, who is an illustrator, told Al Jazeera.

Many refugees have cycled through Arthere over the past year, including Houssam Alloum, who hails from the southwestern Syrian city of Suwayda. He has been in Turkey for 15 months after fleeing the Syrian war.

Alloum, who is no longer a member of Arthere, says he left the programme because he wanted to focus on working with an NGO that helps to rehabilitate refugee children. He now teaches these children art to help them get over the trauma of war. He also plans to return to Arthere as a guest artist.

“Syrian refugee artists need facilities to create art, and contacts to exhibit their work and make themselves recognised,” the 29-year-old painter and sculptor told Al Jazeera.

“This is not easy in Turkey, as the country is not very open to foreigners. And Arthere is trying to provide that for Syrian artists.” 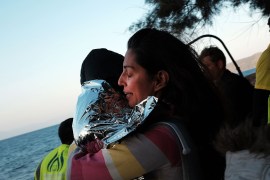