Toronto, Canada – As plane loads of Syrian refugees land in Canada, the country’s healthcare system is bracing for impact.

From coast to coast, medical centres and hospitals are rallying to ensure that they can accommodate the record numbers of refugees who may require care. With an estimated 5,000 refugees expected to resettle in the Greater Toronto Area, the newly launched Syrian Refugee Medical Clinic in Toronto is open for business.

“We’ve had a trickle of Syrian folks who have come through our clinic,” says Dr Meb Rashid, a Toronto-based physician who specialises in refugee healthcare. “But we haven’t seen those massive numbers yet. The first plane load arrived and we’re expecting another three planes.”

Rashid is the medical director of the Women’s College Hospital’s Crossroads Clinic, a health centre that serves newly arrived refugees in Toronto. Located on the hospital’s third floor, the clinic looks like a regular ward. Patients are greeted by a friendly receptionist and ushered into a standard doctor’s surgery.

Healthcare for refugees in Canada

However, Crossroads Clinic is anything but ordinary. It is staffed by medical experts in refugee health and involved in research initiatives. Since it opened in January 2012, more than 1,400 patients from more than 65 countries, including Afghanistan, Iran, Nigeria, and North Korea, have received care from the clinic.

“Historically, Toronto receives the largest number of refugee claimants in Canada,” says Rashid. “It’s also one of the most multi-ethnic cities in the world. Over half the city is foreign-born.”

But recently, Crossroads Clinic and many others face a new challenge: preparing for the 25,000 Syrian refugees expected to arrive in Canada between December 2015 and February 2016. With such a large-scale resettlement, concerns have been raised about the facility being overwhelmed.

“We’ve had larger migrations, but not over such a short period of time,” Rashid says.

Back in September, Rashid began plans to deal with the anticipated surge of Syrian refugees arriving in Toronto. The Crossroads Clinic ramped up its services, partnering with other healthcare organisations in the city. Together, the alliance launched a new medical clinic dedicated to serving newly arrived Syrian refugees.

“The numbers are a trickle now, but those numbers are going to steadily and very rapidly increase,” says Dr Paul Caulford, the medical director and co-founder of the Canadian Centre for Refugee and Immigrant Health Care (CRIHC), one of the partner clinics.

“The clinics are absolutely necessary, and it’s the right thing to do. When they’re here, it’s our job to help and treat them.”

Through the network, the Syrian Refugee Medical Clinic holds about 25 clinics a month at rotating locations across Toronto, including the Crossroads Clinic and CRIHC. Patients receive health assessments and care from physicians and healthcare professionals with expertise in refugee health – all free of charge under Canada’s universal healthcare system.

The goal is to integrate newly arrived patients into the Canadian healthcare system and, after a few months, link them with healthcare providers within their local communities.

“It gives refugees – who have been living in pretty precarious situations – a chance to get a thorough medical examination shortly after they arrive,” says Peter Goodspeed from Lifeline Syria, a Toronto-based non-profit organisation that helps private citizens to sponsor Syrian refugees in Canada.

“It will introduce them to the Canadian healthcare system right away and help ease their access to family doctors.”

Since launching in October, the network has grown from four healthcare organisations to more than 20. Now, Toronto-based hospitals, community health centres and other medical practices are positioned to offer specialised and immediate care to newly arrived Syrian refugees.

“Many refugees are actually in relatively good health,” says Rashid. “They have been the ones that climb over the mountain and wade through the stream to get away from whatever they’re fleeing.

“But many have never really had good primary care. Our model is built on engaging them in the healthcare system early and keeping people healthy. It helps with successful integration.”

Of course, despite extensive planning and coordination, some uncertainty remains about what to expect once the planes land.

“Until five years ago, Syria was a middle-income country with a very good healthcare system,” says Rashid. “Their immunisation rates were over 90 percent. And then the world changed. The ground disappeared from underneath people.

“Living desperate lives outside of Syria, a lot of refugees have been unable to afford or access healthcare,” Goodspeed concurs. “When a refugee family sets out to start a new life here, it’s essential that they are confident that their health needs are addressed. I imagine it can also relieve any anxiety over health issues.”

The clinical team has a few hunches about the medical issues they may encounter, and are adjusting their practice accordingly. Rashid anticipates that “good primary care” will be one of the main needs.

Surviving war and hardships associated with migration, other patients may require referrals to specialists or more complex care.

“Half of the refugees coming into the country right now are children,” says Goodspeed. “They’ve probably gone through some pretty dangerous times and may need special attention.”

Rashid says: “Some will need surgery, because they have endured torture. We’re expecting war-related trauma – amputations and injuries. And of course, mental health issues.”

Rashid explains that anxiety disorders and post-traumatic stress disorder are not uncommon among refugees.

“Refugees are often here alone; their schooling may have been disrupted or they haven’t had the opportunity for any higher-level education. They often struggle with integration, which overlaps into mental health,” he says.

This uncertainty aside, the Syrian Refugee Medical Clinic is prepared to handle most medical issues in-house, and is already accepting bookings for newly arrived Syrian refugees. At the Crossroads Clinic alone, the physicians and nurses all have varied but specialised training backgrounds, such as in tropical medicine and mental health. Language interpretation is available onsite through a phone service.

READ MORE: Note to the world leaders – This is how to welcome refugees

After working abroad early in his career, Rashid returned to Canada and practised at a health centre that primarily served migrants and refugees, which increased his interest in refugee medicine. But, as he professes, the most critical skillset for treating refugees isn’t necessarily a medical degree or overseas experience.

“The most important quality [when] working with newcomers and refugees is open-mindedness and kindness,” he says. “It’s hard to get to the issues if people don’t trust you.”

While reviewing charts and providing physical examinations are critical, the staff also dedicate time to ensuring that the clinic is a welcoming and safe environment for clients.

“The first visit, there is a lot of talking,” he says. “The goal is to make sure people come back for a second visit.”

For incoming refugees, the Syrian Refugee Medical Clinic offers a promising start to resettlement in Canada. But there will still be hurdles to navigating the healthcare system, particularly as the former Conservative government made drastic cuts to the refugee health insurance programme in 2012, defunding coverage for some refugees and refugee claimants.

“We’ve had to fight tooth and nail to provide healthcare to the most vulnerable,” says Dr Caulford. “What always struck me as odd was that those individuals would survive those bombs, the famines, and forced global migration. And when they get to Canada, they are perhaps more at risk when they’re sick and can’t be treated.”

The Federal Court struck down the cuts in July 2014, labelling them “cruel and unusual”. Newly elected in October 2015, the Liberal government has yet to reverse these cuts; but in the interim period, health benefits will be available for the 25,000 Syrian refugees arriving in Canada on or after November 4, 2015.

“There’s a lot of moving parts,” says Rashid. “Since this plan was announced, primary care clinicians and organisations are stepping up and the coordination is now starting to happen. I think the healthcare system is ready to do this.”

However, many refugees – both Syrian and non-Syrian – who arrived in Canada before November 4 are not eligible for this exemption, leading some advocates to raise concerns about equitable access to healthcare.

“We have people from non-Syrian locations – just as brutalised, damaged, at risk – making this journey,” says Caulford. “And because they’re not part of the [incoming] Syrian group, they’re not receiving the same equitable access to Integrated Federal Health Program-type services.

“It’s not given to someone from Iraq, Afghanistan, Sub-Saharan Africa – those individuals don’t receive the same. No politician is at the airport giving them a kiss when they arrive.”

Despite the challenges and gaps, there are high hopes for the Syrian Refugee Medical Clinic – and for the newly arrived Syrian refugees.

“The healthcare system in Canada will be made stronger with this rush to help Syrians,” says Caulford. “It will give us more organisation, teach us where our weak spots are, and help us with future planning.

“People have endured such horrific things, but there is a tremendous resilience,” says Rashid. “I was once asked if I found my work disturbing – I actually find it just the opposite. I find it exhilarating because people have often fled from horrors and arrive with a real desire to move on. There’s a really inspiring message in that.” 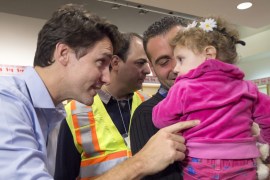