Kuala Lumpur, Malaysia – Just the previous week, Mohamed Ibrahim’s family had been in Syria, struggling to survive amid the devastation of war, living every day in fear of bombs. Now, the only loud noises they hear are the thunderclaps from Malaysia’s ferocious tropical storms.

Mohamed’s family are among the first of some 3,000 Syrians for whom the Malaysian government has promised to provide refuge over the next three years. Their arrival is a welcome relief for 28-year-old Mohamed, who came to the country four years earlier to take a job as a barber.

“It was very hard,” he said, during a break from cutting hair and tending beards. Mohamed had left behind his parents and two siblings in Syria. “I couldn’t sleep properly. I did not know what I would hear next. I was scared; praying to God that everything would be safe for them.”

Malaysia’s Prime Minister Najib Razak announced his plan to take in the Syrians at the United Nations in October. Millions have fled Syria since the civil war started five years ago, mostly to neighbouring countries such as Turkey, and increasing numbers of people continue risking their lives at sea to reach western Europe.

Mohamed said he applied to the government for permission to bring his family to Malaysia, and arranged all the travel himself. “We are the starting point,” he said.

Malaysian officials are still working out the details of the programme, but the government has indicated that  the Syrians would be given temporary residence passes and allowed to work. Their children would also be able to attend school.

“[It is] a very generous offer to help 3,000 people escape from warzones and get some kind of temporary protection in Malaysia,” said Rick Towle, the UN refugee agency UNHCR’s resident representative in Malaysia.

“It’s a great offer. It’s a good opportunity for people to find sanctuary and we’re very happy to look at how we might operationalise or regularise that.”

At the end of September, there were more than 158,000 refugees in Malaysia, according to the UNHCR, most of them from Myanmar. But the country also has significant communities of people from countries including Afghanistan, Pakistan and Iraq, as well as 1,110 Syrians.

Malaysia is not a signatory to the UN Convention on Refugees and refugees and asylum seekers who find themselves in the country lead a precarious existence on the margins of society, at risk of arrest as “illegal immigrants” as Malaysia makes no distinction between undocumented workers and refugees. Most live in the cities, but they aren’t allowed to work or send their children to school.

Thirty-two-year-old Daria,  who asked that her identity be concealed, is a Syrian refugee in Malaysia illegally. She has been in the country for nearly four years, with her husband and two boys. The couple have a variety of jobs. As she talked, Daria threaded beads on to a string, creating a bracelet to sell at the craft bazaars that are popular with expatriates who live in Malaysia.

Daria’s children go to an informal school near by, where she also teaches and which is run by the same group that organises the beading classes.

Sahabat, as the centre located in the Kuala Lumpur suburbs is known, also offers vocational training courses and language classes so refugees have a better chance of finding work.

Lia Syed, who heads the Malaysian Strategic Research Institute, which works closely with non-Myanmar refugees and which set up Sahabat, fears that the offer to Syrians could create a two-tier system for refugees in Malaysia.

In the past, Malaysia has opened its doors to vulnerable people, including those fleeing the conflict in the Indonesian province of Aceh and Bosnian Muslims, whose lives were torn apart when Yugoslavia descended into civil war in the early 1990s.

The government has said the experience with the Bosnians is likely to shape the Syrian initiative.

Tarik Sehovic arrived in Malaysia in 1991 as a 19-year-old student, taking advantage of a government-sponsored programme to provide scholarships to Bosnian Muslims. He never left.

“I didn’t know anything about Malaysia… what was this place… but I could also see Yugoslavia was disintegrating and I needed to get away,” Sehovic, who is married to a Malaysian woman and has three young children, explained in an interview.

He was one of scores of students and, later, hundreds of Bosnian Muslims who were given shelter in Malaysia as the civil war raged, in a plan championed by then Prime Minister Mahathir Mohamad.

“The Serbs openly said that they wanted to commit ethnic cleansing,” Mahathir, now 90, recalled during an interview at his office in Putrajaya.

“Ethnic cleansing means genocide. I would have thought that immediately everybody would have taken action against them, but nothing was done.” The Malaysian government helped by providing scholarships for students, as well as basic housing. The Bosnians were also allowed to work.

But the case of the Bosnians was different. “The Malaysian government did not refer to the Bosnian community that emerged in the early 1990s as refugees,” researcher Hamza Karcic wrote in a paper published last year in the journal ‘Indonesia and the Malay World’.

“Officially, they were known as guests.” Perhaps this was due to “the sense of Muslim solidarity prevalent in Malaysia at the time,” explained Karcic. But, “denoting Bosnians as guests was also perhaps a more optimistic label – implying that, at some point, they would return home.”

Most Bosnians did indeed return home, although Sehovic recalls that many of those who studied with him at the International Islamic University moved on to Australia, the US or Britain. Now in their early 40s, they are diplomats, academics and senior business executives, he said.

READ MORE on War in Bosnia

“Malaysia wants to provide refugee protection on its own terms – it wants to choose when and for whom it provides protection,” Alice Nah, a lecturer in the Centre for Applied Human Rights at the University of York, wrote in an email.

“As such, it prefers to resettle refugees from afar rather than provide a status to those who have already arrived on its shores. These decisions are partly political. They are partly related to concerns about irregular movement,” Nah explained.

There are some four million foreign workers in Malaysia, about half of them working illegally in the kind of jobs, according to government officials – on construction sites, plantations and as kitchen and waiting staff – that Malaysians themselves do not want to do.

The UN has stepped up calls to register people more effectively and allow registered refugees to work. In November, the home minister told parliament that the government was considering that option for the Rohingya Muslims, Myanmar’s persecuted Muslim minority, who have been coming to Malaysia for decades and currently number about 50,000.

“If states are worried about law and order, security and criminality, the best thing is to register and identify the people who are already here,” UNHCR’s Towle told a refugee roundtable at the end of last month. “The regularisation of refugees is an absolutely critical and sensible thing for governments to do.”

Mohamed, who is from Idlib in northwestern Syria, said his family could never have raised the money to pay traffickers to take them to Europe – the Malaysian offer has given them a chance to start again. His brother is thinking about returning to his studies, his sister considering the possibility of working in a hair salon. His parents are simply thankful to be away from the conflict.

Daria’s experience has proved more bittersweet. She regrets coming to Malaysia – both her brother and sister chose the risky boat journey to Europe rather than following in her footsteps. She dreams of being resettled in a third country.

She feels she has already wasted four years of her life, labelled “illegal” and living in limbo. “Just waiting,” Daria said, ruefully. “Waiting.” 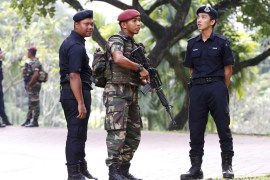 Army deployed after reports that ISIL and Abu Sayyaf suicide bombers may be planning attacks in Kuala Lumpur. 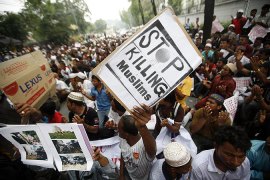 The number of Syrians fleeing the civil war and seeking shelter in Malaysia has nearly tripled in recent months.