The morning cold was intense as my crew and I set off from Thessaloniki, northern Greece, to reach the border with Macedonia.

It was in Evzoni, not far from the border, where we first saw more than a dozen buses loaded with refugees.

I was shocked by the amount of men, women and children.

I spotted a young Syrian from the Homs countryside. A cross was hanging out of his shirt. I asked him if he was getting a better treatment.

I met another Syrian, a pharmacist who had fled Deir al-Zour, an area under the control of the Islamist State of Iraq and the Levant (ISIL).

“So far I haven’t seen any good treatment,” he said. “We slept on the bus. No food, no toilets… I took the risk for my one-year-old and five-year-old kids. I want a better life for them.”

Standing on the side, a group of Greek Protestants were talking about God and handing leaflets, including in Arabic and Farsi.

I asked them if they were preaching Christianity to the refugees. “No,” one of them said, “I am only telling them that Allah and God are one. We also have verses of the Quran in it.”

I read through some of it and there were none.

Another group of young American Protestants were giving copies of the Bible. I got an Arabic version.

A further 20-minute drive to Idomeni, the border crossing with Macedonia is open – but only one bus at a time is allowed to unload.

I met a Yazidi family of seven from Iraq who had escaped because of the power struggle in Sinjar after ISIL was forced out of the city.

The man did not know what he will find in Macedonia, or how can he continue his journey to Germany.

One UNHCR employee told me there had been push-backs by the Macedonian border police recently. A few refugees, he said, had been injured a few nights ago.

The Greek police are also not allowing refugees who have been denied entry to Macedonia to stay at a camp on the site – instead, they want to send them to the capital Athens right away.

Encouragingly, several aid groups – including Doctors Without Borders – are operating there, handing clothes, water and other items.

There is also a Greek NGO providing food donations to a group of chefs and volunteers to prepare hot meals for the refugees – a nice gesture to comfort and ease the hardship of a desperate people heading into the unknown. 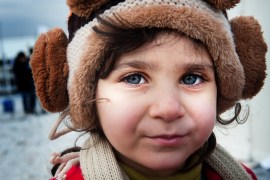 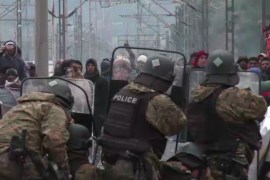