By
Janos Chiala and
Tali Mayer

This article first appeared in the January 2015 issue of the Al Jazeera Magazine.

Donbass, Ukraine – Donbass is a coal-mining district in the east of Ukraine, lying on the border with Russia, more than 700km from the capital city of Kiev. Aside from some heavy industry and breathtaking countryside, Donbass has little to offer its inhabitants. In fact, for the vast majority, there is only one available form of employment: mining.

The region may be poor and underdeveloped but it is rich in coal, forcing generation after generation of its young men into a life spent largely in darkness, digging for black gold.

Many, especially the young, can only find work in illegal mines, which are more or less plain holes in the ground. In these, they face even greater risks, knowing that they will never get a pension or compensation in the case of injury or illness – two things that are almost taken for granted in a job in which every day might be your last.

No miner here will tell you that he likes his job, and most seem to hate it. But becoming a miner offers at least a measure of financial security, if such a word can be applied to a type of work that takes place hundreds of metres below the ground, in unsafe and aging mines that claim lives and limbs on a daily basis.

The young miners of Donbass also face the uncertainties that cloud the future of the region. Dozens of mines have been closed over the last decade because of poor productivity, leaving thousands of miners unemployed.

The prospect of economic integration with Europe to the detriment of Russia, and the adoption of stricter mining standards, alienated miners and played an important role in sparking the current pro-Russian uprising. With the region mired in insecurity, its residents don’t even know in which country they will be living in the future.

On their part, the young miners speak, think and sing in Russian, and have little attachment to Ukraine, a country that they feel never gave them anything. They often speak of how the more Westernised residents of Kiev and the rest of the country see them as ignorant menial workers and show no respect for the hardships and dangers they face every day. To them, Ukraine is a failed state, particularly when compared to a Soviet Union they never personally experienced. Back then, they say, workers, and miners in particular, were the backbone of a strong country, and nobody looked down upon them.

Often having grown up without parents, many of whom died as a result of mining themselves, the young miners still recall happier times when they dreamed of becoming an archaeologist, a carpenter or of having their own business. Now they struggle to stop their work defining their lives, and to find what little enjoyment they can – fishing, drinking and smoking with friends – when they are above ground. This is the life of a miner. It isn’t a life any of them would have chosen. But nobody offered a choice to the young miners of Donbass. 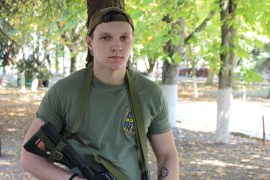 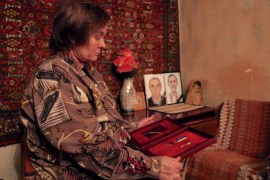