Rathenow, Germany – Abdishakur Ahmed spends most days disconnected from German society, hanging out in a small room he shares with two other Somali refugees. But, in his state-provided dormitory in a rural German town, Ahmed dreams of building a better life.

Ahmed, whose parents and eight siblings remained in Somalia, has been living in Rathenow since February 2014. He is one of hundreds of thousands of people who have fled their homeland and applied for asylum in Germany, a country that has registered more asylum applicants than any other Western country for four consecutive years.

The smugglers told me 'If you don't pay more money, you die'.

In the first eight months of 2015, Germany registered 256,938 asylum applications and Germany’s Federal Office of Migration and Refugees expects to register a total of 800,000 applications by the end of the year.

However, Germany has refused Ahmed’s asylum application, granting him instead a temporary residence certificate that could be revoked at any time. Now he is stuck in a stalemate. He is living in Germany in a safe environment, but he is away from his family with an unclear future and a limited present.

Ahmed comes from Somaliland, an autonomous region in northern Somalia. He was a student studying agriculture at a university in Hargeisa, but was forced to “leave Somalia because of the political situation and the violence”.

He travelled to Addis Ababa, the capital of Ethiopia, where he paid $300 to cross the border illegally into Sudan. “For 15 days we were in the Sahara Desert,” he says. “The smugglers told me, ‘If you don’t pay more money, you die’.”

Ahmed’s family had no choice but to send him money to save him from death.

After making it to Khartoum, the capital of Sudan, Ahmed travelled on to Libya. “All together, the trip from Khartoum to Tripoli was 16 or 17 days,” he remembers. “Then I paid $800 to go on a boat to Italy, but Libyan police caught us and took us back. I was in jail for one month and then I escaped.”

Ahmed had to shell out another $800 on his path to freedom over the Mediterranean.

The Italian navy rescued Ahmed and the 123 other refugees on their 12-metre boat and took them to Lampedusa Island. “They took my fingerprints, and then transferred me to a refugee camp called Cara Mineo, near the city of Catania. I stayed in Cara Mineo for one year and two months,” he says.

In December 2013, Ahmed decided to leave Italy and go to Germany. He wanted to repay his family the money that they had sent him during his journey, but in Italy’s challenged economy, where refugees get minimal welfare, he barely had enough to survive.

However, Ahmed could not have anticipated what would happen next. “The government of Germany would not give me refugee status because I was fingerprinted in Italy. They told me to go back there. I am a ‘Dublin’ case.”

A Dublin case – as Ahmed calls himself – is a person who has violated the EU’s Dublin Regulation, and as a result can be deported back to the first EU country he entered. Last year, Germany registered 35,115 new Dublin cases, and 782 people were deported to Italy as a result of the Dublin Regulation, according to Katrin Hirseland, a spokesman for Germany’s Federal Office for Migration and Refugees.

“I am not afraid,” says Ahmed of the possibility of not getting the documents he needs in Germany. “I am afraid of Allah only. I am not afraid to go back to Italy. If they send me back there, I will later come back here.

For now, Ahmed is not permitted to work in Germany and lives off welfare benefits from the German government. He does not know what will come next but he never stops dreaming of a better future for himself – and for his homeland. 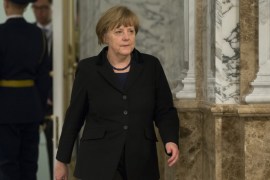 Merkel’s role in the diplomatic frenzy over Ukraine creates a new political reality in Europe.