Occupied East Jerusalem – The future of the Palestinian National Theatre is fraught with uncertainty as the organisation struggles with declining audiences and high operating costs.

Located in the American Colony neighbourhood of East Jerusalem, the theatre – also known as el-Hakawati, meaning “storyteller” – has amassed a debt of more than $150,000, according to director Amer Khalil. Earlier this month, supporters and a crowd-funding campaign helped to raise $14,000, providing Hakawati with a stay of execution after an insurance company sued the theatre over unpaid bills.

But as Palestinian cultural life has shifted to Ramallah amid increasingly draconian restrictions on freedom of movement for Palestinians throughout the occupied West Bank, it is not clear how much longer Hakawati will be able to stay afloat.

“Running a Palestinian cultural centre in Jerusalem is really difficult,” Khalil told Al Jazeera. “Here with the Israeli government and municipality, we pay taxes but we don’t want their funding. We are in East Jerusalem; this is the Palestinian National Theatre. We don’t agree with the government and their policies. They are occupation for us.”

PERSONAL ESSAY: The storytellers of Ramallah

According to Khalil, who was among the theatre’s founders and returned to run it in 2011, bills have mounted for utilities, workers’ insurance and local property taxes due under Israeli law. The 300-seat theatre, which derives its income from private donations, grants and ticket sales, runs an average of three shows a week. It never reaches full capacity these days, Khalil said, and its revenues are not sufficient to cover its costs.

Hakawati has also struggled over the years because of its role as a cultural centre in the midst of the region’s long-running conflict.

At the opening of a play in Acre in 1987, Khalil recalled, a far-right Jewish group bought tickets to the show and then started a brawl with the actors once it began. The Story of Kufur Shamma, written by French-Palestinian François Abu Salem and Jackie Lubeck, a Brooklyn-born Jewish woman, was about a young man returning to a destroyed fictional village after 1948, and then wandering for 40 years in search of his relatives.

More recently, in June 2013, an eight-day puppet festival was cancelled at the theatre after Israel’s public security minister claimed it had received funding from the Palestinian Authority without authorisation. The children’s show had been running for 18 years.

And when Jerusalem was named Arab Capital of Culture by the Arab League in 2009, police shut down the theatre’s week-long Palestinian literary festival, saying it was organised or funded by the PA, although organisers maintained it was independent.

Throughout Israel, Palestinian cultural institutions have been an easy target for recently appointed culture minister Miri Regev, who earlier this year told representatives of Israeli cultural institutions that “the government doesn’t have to support culture. I can decide where the money goes,” according to a report in Haaretz.

If they shut it down, it would be a big loss not only for Palestinian culture, but for our memory, for what the theatre represents.

Last June, Haifa-based al-Midan Theatre saw its public funding frozen after it staged a play about a Palestinian political prisoner convicted of killing an Israeli soldier. The Elmina Theatre based in Jaffa was also threatened with funding cuts when the troupe refused to stage its play in a West Bank settlement.

The Palestinian National Theatre has been shut down more than 30 times by the Israeli government for alleged political or banned activities since it first opened its doors, although Khalil says this time the problems are “purely financial.” Before the wall and the checkpoints, people would come to see shows from all over the West Bank and the Jerusalem suburbs. But with West Bank Palestinians barred from entering Jerusalem without a permit from the Israeli authorities, Palestinian cultural life has largely moved to Ramallah, where running costs are up to four times lower.

Edward Muallem, who runs the Ashtar Theatre, said he had no choice but to move his theatre school from Jerusalem to Ramallah, where all West Bank Palestinians could access it.

“The challenge for us is to stay and work in Jerusalem,” Rania Elias, director of the Yabous cultural centre in Jerusalem, told Al Jazeera. “It’s about our very existence here, the question of uprooting our Arab identity and the process of Israelisation of the city. The conflict is not just over buildings; it’s also about identity and people.”

According to Frayda Leibtag, a spokesperson for the Jerusalem municipality, “cultural institutions in Jerusalem are eligible for support in the form of 50 percent discounts on their Arnona [local property tax] bills” if they apply. Elias said it took two years in the courts to obtain one for her cultural centre.

“This theatre is like my tongue,” said Kamel Elbasha, who was the theatre’s artistic director for five years and now runs a theatre workshop for mostly amateur students. “If I want to do a good, professional play, this is the only place I can do it in the whole of the West Bank and Gaza.”

Ramzi Qassem, a light technician, started working at Hakawati when it first opened more than three decades ago. When he is not operating the light board, he can be found backstage, in a room filled with props, where warm coffee is always at hand for visitors. “The theatre is my home,” Qassem told Al Jazeera.

Ramzi Maqdisi, a Jerusalem-born actor and director who launched his career at the theatre, says he remembers watching plays at the Palestinian National Theatre as a child.

“If they shut it down, it would be a big loss not only for Palestinian culture, but for our memory, for what the theatre represents,” Maqdisi said. “Until today, the best coffee is the one I drink backstage at the theatre.” 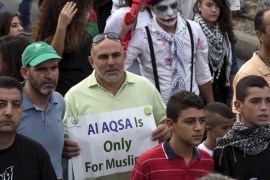