It’s a wonder that Coca-Cola’s latest Mexico Christmas commercial ever got made.

Consider the plot: sad indigenous people in the Mixe region mope around a hillside feeling rejected by society. Then a group of young white hipsters turn up to save them, with the aid of coolers full of Coke and a Christmas tree. Having watched the hipsters put up the tree, the indigenous people can only smile in wondering gratitude.

It was easy meat to national and international press, who descended on it en masse, including us at Al Jazeera.

But for one reason or another we got to the story a bit late, which gave us the opportunity to do things a bit differently.

We’d seen other media rely on rights groups to speak on behalf of the indigenous people in the video. But not also getting the opinion of those featured in the commercial seemed – in a way – to objectify and patronise them just as much as the advert itself was accused of doing.

Thus it was that we found ourselves winding our way through the mist-enveloped hills of Oaxaca state, heading to Totontopec in the Mixe region.

The first man we met was village authority Arcangel Villegas. He’d given permission for Coca-Cola to film in the town and seemed genuinely mystified by the furore surrounding it.

“I thought, this is the opportunity for the world to get to know my village Toto. Why shouldn’t they see the village and what there is, and maybe come to visit?”

Next up was Zuleyka Yatzalli, a 15-year-old schoolgirl who featured in the advert. She was bitterly disappointed when Coca-Cola was forced to pull it, and angry with those who she said had spoken in her name.

“When they took it down I was disappointed because people were saying things that weren’t true. They said we’d been humiliated, and it was the opposite, we were proud to be recognised,” she told us.

The general sentiment in the village seemed to be pride that Coca-Cola had chosen them for the commercial and bafflement that it had caused such offence.

Other Mixe people in surrounding towns felt differently and took part in a rights group video criticising the commercial with very valid points concerning the rise in diabetes and obesity in indigenous regions since the full-scale invasion of junk food and soda companies, especially Coca-Cola.

But our day spent with the Totontopec community raised some interesting questions for us. Was it wrong for others to have complained on their behalf without asking their thoughts?

Or were they simply unable to grasp the wider significance of the commercial in a country in which discrimination against the indigenous population is constant?

Or perhaps Coca-Cola’s advert was, as the villagers said, just not such a big deal?

Our team: cameraman Gustavo Huerta, producer Amparo Rodriguez and myself, certainly had a spirited debate after we’d finished filming. We’d be interested in hearing your views also. 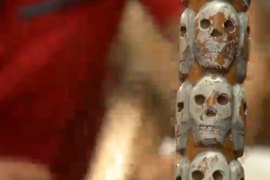 Uarhukua, a hard-hitting ball game that looks like an ancestor of street hockey, is growing in popularity. 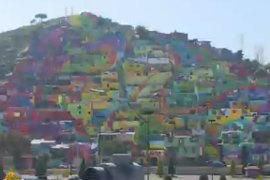