Kiev, Ukraine – A veteran of the Soviet Union’s war in Afghanistan and the Chernobyl nuclear clean-up, Mykola Mykolaiovych Sharpatyi is now fighting for political reform and an end to corruption in Ukraine.

For him, the issue is personal. Sharpatyi is organising protests to push the Ukrainian government to honour its broken promises of remuneration for those who cleaned up Chernobyl after the nuclear disaster there in 1986.

But his dealings with the political establishment, both before and after the 2014 uprising that toppled former Ukrainian president Viktor Yanukovich, have left Sharpatyi disillusioned.

“Everybody is corrupt, and the politicians reform only for their own well-being,” he claimed. “They are all elements of one chain,” Sharpatyi says.

According to Transparency International’s Corruption Perception Index, Ukraine ranked 142 out of 174 countries in 2014 – below countries such as Uganda, Nicaragua and Nigeria. Ukraine has showed little progress since the ousting of Yanukovich, according to the index, with its perceived level of public sector corruption in 2014 unchanged from its level in 2012.

‘Take your money and run’

Although estimates vary, Donald Bowser, an adviser to Ukraine’s National Anti-Corruption Bureau, said that “easily over a dozen billion US dollars a year” continue to be stolen from the Ukrainian state through corruption.

He said much of the corruption stems from the prosecutor general’s office. “It is the biggest organised crime game in town … just stone-cold gangsters,” alleged Bowser.

The prosecutor general himself, Viktor Shokin – who was recently targeted in an assassination attempt – serves at the behest of President Petro Poroshenko. Shokin and the prosecutor general’s office “give a legal facade to the corruption schemes”, Bowser claimed.

Since he was appointed as prosecutor general by Poroshenko in February, Shokin has not brought any cases of corruption to court involving Yanukovich or his partners. Nor has he prosecuted the hundreds of high-level corruption cases that have been brought to his office by Ukraine’s parliamentary committee on preventing and combating corruption.

“Reform is definitely being halted within the prosecutor’s office, just because the stakes are so high. There’s so much money in that system. And the problem is that the logical thing for many of the people within the system is to say, ‘Okay, take your money and run’,” said Bowser.

The prosecutor general’s office did not respond to Al Jazeera’s requests for comment.

A new deputy in town

In February, David Sakvarelidze, who successfully fought corruption in Georgia as the deputy prosecutor general there between 2009 and 2012, was brought to Ukraine to do the same thing in Kiev.

But Sakvarelidze’s tenure in Ukraine has not been as successful. An incident that took place this summer illustrated the limits of Sakvarelidze’s authority and the pressures placed on him from above to prevent him from prosecuting corruption.

In July, Volodymyr Shapakin, chief of the investigation department of the prosecutor general’s office, and Oleksandr Korniets, former deputy prosecutor of the Kiev region, were arrested. Suspected of taking bribes and running protection and extortion rackets, the two were found with $400,000 in cash, 65 diamonds and a Kalashnikov rifle.

The men became known as “The Diamond Prosecutors”, and Sakvarelidze tried to press charges against them.

But the day after the pair were arrested, Sakvarelidze found himself accused by the prosecutor general’s office of unjustly raiding a state institution. The “Diamond Prosecutors” were soon released on bail. Nothing has since come of the case, nor of the accusations against Sakvarelidze.

The committee is responsible for cleaning up the system by removing old, corrupt establishment figures are preventing them from re-entering positions of power. “They are not letting him reform the prosecutor general’s office,” Drik said.

According to Drik, Sakvarelidze is unable to reform the prosecutor general’s office or prosecute high-level corruption because Shokin does not give him the power to do so. Shokin, added Drik, is himself controlled by President Poroshenko.

This view is shared by Vitaly Shabunin, the head of the board of Ukraine’s Anti-Corruption Action Centre, who claimed that Shokin “would never make this decision [to condone corruption] without the president’s will”.

Not enough political will

Despite public frustration with the lack of progress and the continued pervasiveness of corruption, especially in the prosecutor general’s office, Bowser believes that there is little energy within the political establishment to create real change. “The side that doesn’t want reforms is so much stronger,” he said.

Since the revolution two years ago, there has been a “silent, slow counter-revolution”, as an old and corrupt establishment has fought against political reform and the anti-corruption measures put in place, said Vatilii Cherniavsky, a civic expert on the Parliamentary Committee on Preventing and Combating Corruption.

Those who want to fight corruption say they have found themselves stymied by the prosecutor general’s office, and by the machinations of corrupt politicians and oligarchs who exert strong influence on the state and judicial system.

“These corrupted judges, these corrupted prosecutors let the new president, the new prime minister, and many members of the parliament to continue corrupt schemes that were established by Mr Yanukovich,” Sobolev told Al Jazeera.

Sergey Leshchenko, a former investigative journalist and current member of Ukraine’s parliament, said Poroshenko “has to decide what is more important to him: to have good relationship with his friends, or to [fight corruption]”. 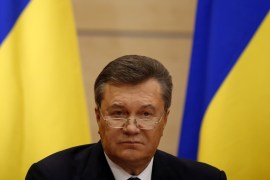 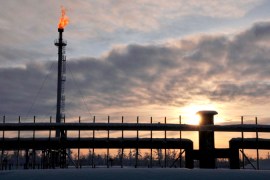 Russia close to deal to supply gas to Ukraine and EU

Deal to supply winter supplies initialled, but not yet formally signed, after months of talks overshadowed by conflict. 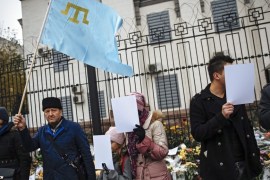