My lungs burn. I have a thumping headache. After washing away several layers of dust, smoke and ash from my body and clothing I am lying on the floor of a hotel room and tallying the health costs of covering this story.

Ordinarily, I am the kind of person to walk out of a bar on a Friday night if I find it too smoky. But I’m in South Sumatra, Indonesia, the site of the world’s greatest greenhouse gas emissions crisis at this moment. And there’s no escape from the toxic haze.

I keep reminding myself that the story is important. Perhaps the world leaders gathered in Paris for COP21 will see it and force Indonesia to do more. Perhaps the big multinational brands that buy palm oil and paper from Indonesian companies will think again. Perhaps office workers will print fewer pages or people will be willing to pay more to buy recycled toilet tissue. Surely we can all do that after the scale of the disaster this year?

My brother, a scientist, helpfully reminded me on Facebook to keep my N25 mask on because lung tissue, like rainforest, does not regenerate. “No gaps!” he implored.

This was on my mind as I watched twin toddlers, a boy and a girl, being bathed on the porch of their home. Their mother and pregnant aunt poured water over their heads, but it was in vain. They were just as quickly smothered by thick smoke and chunks of ash blowing across their village. Their home lies at the edge of a massive pulpwood plantation that has seen some of the worst fires in Indonesia this season. All around them, the ground smouldered. It was the closest thing I could imagine to hell.

The companies who own the plantations say the burning is not deliberate. They blame people outside their land for starting the fires along with dry weather from the El Nino weather pattern. But I have seen otherwise.

“Greenwashing” is easy in Indonesia, a country that produces the most paper and palm oil in the world. Each year, vast swathes of land are set alight to pave the way for these plantations, with little regulation or oversight. Throughout October and November, Indonesia released more greenhouse gases daily than the United States.

As we drove away from the village bathed in smoke, we gave out some of our masks. A pregnant woman put one on, but the children kept playing on the burning land, with nowhere else to go. It’s their faces that I remember before I press “print” on something I don’t really need, or before I grab a wad of disposable paper towel in the washroom. 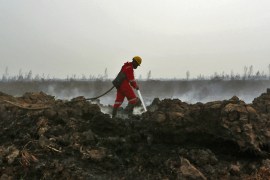 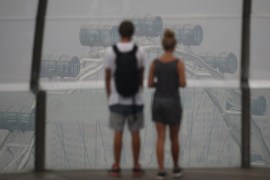