Beijing, China – The picture above was taken from the kitchen window of my apartment last Monday.

The picture below was taken from the same spot two days later.

It really is a tale of two skylines, a reminder that the pollution can evaporate just as quickly as it arrives.

There are mornings when I wake up and hesitate before opening the curtains. What happens next can determine my mood for the rest of the day.

Today that mood can best be described as black as opposed to red – the colour of the government pollution alert now in force for the next three days.

I moved here 18 months ago, inheriting the apartment from an Italian family leaving China because they had had had enough of the pollution.

They longed to live somewhere where clean air was the norm rather than the exception.

Gradually I have learned to live with the smog.

This means that on bad days the air purifiers in my flat operate at the maximum level, burning up electricity doubtless provided from a coal-powered grid.

Such technology does not come cheap, which means it is beyond the reach of millions of ordinary Chinese people.

I am no longer self-conscious about wearing a face mask when I step outside.

This, though, does present a problem when I have to do live reporting which can mean prolonged periods of exposure to toxic air. So I tend on such occasions to keep my answers brief.

Often I am struck by the number of people who don’t cover up. You sense a curiously fatalistic acceptance.

“When the pollution is this bad, it doesn’t really matter whether you wear a face mask or not,” one woman told me last week, just after an orange alert came into force.

Like many other foreign journalists here, I have started to talk in another language – and it’s not Chinese.

“What’s the PM 2.5 reading? Is it above 100 micrograms per cubic metre, like yesterday?”

PM 2.5 refers to particulate matter. These fine particles measure less than 2.5 microns in diameter, so closing the doors and windows in your home and office is not enough to stop them seeping inside.

I pay particular attention to the Air Quality Index operated by the US embassy. You can follow it via an app on your mobile phone.

Its readings tend to be much higher than those provided by the government.

At the time of writing, AQI shows that PM 2.5 level has reached 356 micrograms per cubic metre. In other words, very hazardous.

You long for windy days because the wind is your friend. Strong gusts help to disperse the pollution.

The government says that won’t happen for at least three more days. 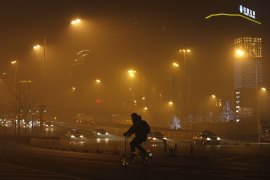 More than 250,000 people in China’s biggest cities could have their lives cut short from high levels of air pollution. 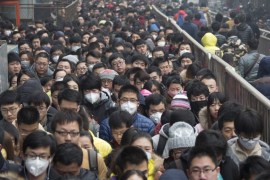 Half of private cars ordered off streets and many construction sites and schools closed as grey haze envelops city.