Paris, France – Kamel Fertass and his friends are sitting outside their local McDonalds. It is in the middle of a roundabout in the suburb of Clichy-sous-Bois. “You want to hear my song?” he asks, holding out his phone.

He sings in a mixture of French and Arabic, his voice synthesised through a vocorder. The song is entitled ‘J’ai mal à ma France’ – I feel the pain of my France. This is the street cleaner’s first musical foray, a means of channelling the grief he felt after hearing about the attacks on Paris on November 13.

“It’s for everybody in France. We are French above all else,” says the 28-year-old, whose parents came to this country from Morocco. “It’s all we know. It’s work, it’s survival, it’s everyday life.”

His declaration of allegiance is heartfelt, but the emotions are mixed. Living in Clichy-sous-Bois, one of the country’s most deprived areas, in a dystopian setting of battered high-rises and low expectations, has not encouraged feelings of belonging for him.

Back in 2005, the suburb emerged as a symbol of the marginalisation experienced by immigrant youths in France, when two teenagers were electrocuted in an electricity substation after being wrongfully pursued by police, sparking massive riots in banlieues across the nation.

Locals say that, bar some new buildings, not much has changed since then. Unemployment stands at 40 percent. With no major roads and no rail link, the community remains cut-off from central Paris, which is only 10 miles away.

Not that Fertass goes there much anyway. He doesn’t feel comfortable, especially not since the Charlie Hebdo and Hyper Cacher killings in January.

“As Muslims, we’re seen in a negative light,” he says. “We feel judged. There’s a lack of trust.”

It’s a feeling that’s well-documented,  this sense among France’s Muslims of being second-class citizens.

But, in the wake of Charlie Hebdo, which set off a passionate national debate on French identity and values, exemplified by the ‘Je suis Charlie’ slogan, many Muslims felt even more alienated from mainstream French society.

RELATED: Why Charlie Hebdo attack is not about Islam

Now, the fresh horror of November’s massacre, which took 130 lives, has darkened the picture further for French Muslims.

In the 10 days that followed it, official sources reported 35 attacks, ranging from the stabbing of a woman wearing a hijab in Marseille to the painting of red crosses on a mosque in the Parisian suburb of Créteil.

It’s an improvement on the 116 attacks on Muslims registered by Dilcra, the government body in charge of collecting data, in the fortnight following Charlie Hebdo.

But, if the polls are anything to go by, public sentiment towards Muslims has worsened. The far-right National Front party made unprecedented gains in the first round of regional elections on December 6, having successfully surfed the current wave of fear to advance its anti-immigrant agenda. The party won around 30 percent of the vote, coming top in six of the country’s 13 regions.

The final outcome will be decided in the December 13 run-off, but the first-round results have already been hailed as a historic breakthrough.

This is despite the socialist government’s tough response to the crisis.

The current state of emergency, in place until the end of February, features a raft of hardline measures, including the deployment of more armed police, who now have vast powers to raid, interrogate and arrest – without judicial oversight.

But there are fears that innocents are being ensnared in the dragnet and stripped of their fundamental liberties.

Yasser Louati, a spokesman for Collectif contre l’islamophobie en France (CCIF), says that Muslims face a triple onslaught of threats – from those who conduct the attacks, from citizens who blame them for the attacks and, now, from the government.

Furthermore, he says, in the current state of collective post-traumatic stress, national unity is seen as an obligation and dissent is not tolerated.

Lawyer Xavier Nogueras is defending a handful of the 300 people who have been placed under house arrest.

At the Tribunal Administratif de Montreuil, his latest client seems hopeful. The owner of a halal burger restaurant for the past 15 years has the backing of figures at his local town hall.

Nogueras hands over the testimonies to the judge, launching into a discourse to slowly unravel the lives of the accused. His client’s wife works long hours at an insurance office. Since he was put under house arrest, he has depended on friends to do the school runs and to manage the restaurant. Worse, some customers are now avoiding the restaurant.

“He has never set foot in Iraq or Syria. He’s not a candidate for jihad. The only problem is that he runs a restaurant which dozens of Muslims frequent every day,” says Nogueras.

Nogueras’ client is listed on the so-called S-Files, an alert system used by the security services to flag threats.

In late November, Prime Minister Manuel Valls announced that, of the 20,000 files on record, roughly half pertain to cases with suspected links to radicalised Islamic groups. There is no question that the files have enabled the authorities to identify many of the figures involved in mass murder.

But neither Nogueras nor his client have had access to the contents of the file, making it difficult to present a defence.

A representative from the Ministry of the Interior acknowledges that the measure is not based on “uncontestable fact”, but on “signs” that radicals held meetings in the restaurant. Given the current climate, house arrest is “proportionate” to the public threat.

It is the turn of the defendant to speak.

“We have all sorts of customers, people who look like me, people with beards, hipsters, police, people who come on mopeds or with buggies,” explains the man.

“I am tolerant, I smoke two packs of cigarettes a day, I drink, I pray … I only speak a little bit of Arabic. I can’t have a conversation. I’ve never been to a Muslim school,” he pleads.

Having said everything to convince the judge that he is living according to the values of the Republic, he returns to his bench. In his denim shirt, trainers and aviator shades, he looks more hipster than jihadist. But then, there’s the beard. In a context where simple suspicion can land you under arrest, these things matter.

That afternoon, the request for a suspension of the house arrest is rejected.

In the 18th arrondissement of Paris, a group of local youth are discussing the subject of beards.

They’re assembled in the Café Associatif on Rue Myrha in the Goutte d’Or neighbourhood, a flashpoint for inter-religious tensions.

Since the Charlie Hebdo incident, attacks on Muslims in the neighbourhood have included wine thrown on worshippers leaving the Khalid Ibn Walid mosque and the distribution of Islamophobic pamphlets.

Twenty-four-year-old Abou Saoubaine explains how a non-Muslim friend took umbrage after he started growing a beard.

Yet, he’s not especially devout and takes special care these days to avoid pious locals who stop him in the street to encourage him to attend prayer.

“You can’t oblige people to go,” he says, indignantly, comparing it to smoking because of peer pressure to look cool.

He’s livid about the Islamic State of Iraq and the Levant (ISIL). “The people who did the attacks are dogs. They’ve stained us,” he says.

Twenty-six-year-old Mohammed Ben Salem, who runs the café, says there’s a feeling of being on trial since the attacks. “People are scared of us now. The perpetrators of the attacks have sullied us Muslims. And the public doesn’t know how to differentiate. They generalise.”

Generally, while there’s no shortage of outrage on the ground, France’s Muslim community has been criticised for not taking a lead in the fight against groups such as ISIL, with politicians like former prime minister Alain Juppé calling on France’s Muslims to “say clearly that they have nothing to do with the barbarians of ISIL” in the aftermath of the attacks.

It’s a call to action that irritates many in the community, who already feel they have been on a non-stop self-justification drive since Charlie Hebdo.

But there has been an underlying unease about heavy-handed raids on the country’s mosques.

With the country now on constant high alert, the public appetite for tough security measures shows no sign of waning.

But Nogueras is wary of the government’s next moves, and thinks the constitutional changes mooted by the socialist government could turn the state of emergency into a permanent tool of executive power, placing it beyond the reach of lawmakers and seriously jeopardising fundamental liberties.

In the rush to tighten national security and accelerate military action in Syria, there has been scant political debate on the more complex issues, in particular those around social marginalisation.

Critics fear that panic-driven lawmaking will fuel an us-versus-them rhetoric that could further stigmatise France’s Muslims.

In an op-ed published in politico.eu, Kenneth Roth, the executive director of Human Rights Watch, warns that tarring entire communities risks undermining their potential for cooperation with the police.

Communities, he says, “should be embraced not only as citizens and long-term residents but as the people most likely to dissuade others from violence and report those who might resort to it”.

In the blink of an eye

Back in Clichy-sous-Bois, Abdullah, a 40-year-old delivery man, is holding court at the local PMU betting shop. He lives in Chêne-Pointu, a Corbusier-inspired vision of high-rise living gone wrong, where families are crammed cheek by jowl in “cages” with leaking roofs and lifts that haven’t worked in years.

“Politicians go on about Daesh (ISIL). But look at the mess they’ve already created in Iraq and Libya,” he says. “They created all this. Now they need to turn down the volume on Daesh, cut off their oxygen supply, find new solutions, stop the hatred spreading.

“We have to find a way to persuade these people to drop their arms. Because if we continue on a war-footing, they will always find a way to recruit people on the inside. Young Muslims here have nothing. They see Daesh on the television and believe that they have found a way to become strong.

“Recruitment can happen in the blink of an eye,” he says. “What these young people need is help.” 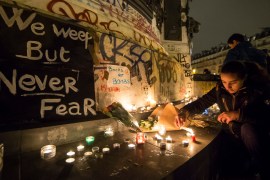 Back to school: Students reflect on Paris attacks

Students and teachers find ways to share their thoughts, feelings and fears about the attacks that shook their city.