Since the Normans first landed on Irish shores in 1169, Ireland’s landscape has been peppered with more than 4,000 castles. Surrounded by brooding lakes, rolling hills and misty valleys, the castles form an integral part of Ireland’s history.

Al Jazeera visited some of Ireland’s finest castles whose owners include war heroes, humanitarians, film directors, patrons of the arts, and entrepreneurs.

Their cumulative histories date back a thousand years with families connected to King Henry VIII, Attila the Hun, Winston Churchill, and Mick Jagger – among others.

Garech a Brún, founder of the traditional Irish music label Claddagh Records, lives in Luggala – an exquisite 18th century hunting lodge on the shores of Lough Tay in County Wicklow.

An intoxicating place, it leaves its guests completely smitten. Michael Jackson didn’t want to leave, Bono said it was his “inspiration”, and Kofi Annan just wanted a quiet walk around the estate.

“I‘ve been living in Luggala all my life. My grandfather originally rented it because he liked shooting grouse and there was a lot of grouse here. He eventually bought it and gave it to my mother as a wedding present.”

Born in 1939, a Brún is the son of Oonagh Guinness of the brewing dynasty, and the 4th Lord Oranmore and Browne from the west of Ireland.

During the 1950s, Oonagh turned Luggala into the most “decorative honey pot in Ireland” attracting poets, scribes, musicians, artists, and politicians.

A Brún is nonchalant about the comings and goings in Luggala throughout the years. “I just get on with people,” he said, happy to share some anecdotes about Michael Jackson. “I only met the man once, in my own living room, but he couldn’t have been more charming.

“I felt like I was talking to a mask and couldn’t see the person inside. We got an SOS that he needed somewhere to live, so we took him in. Unfortunately the place was booked for someone else, so he could only stay six weeks, which wasn’t as long as he wanted. What can you do?”

Sir John Leslie, 4th Baronet, is a 99-year-old World War II veteran who will be appointed a knight of the National Order of the Legion of Honour, France’s highest medal, 75 years after he served as an officer with the Irish Guards at the Battle of France.

“Oh how wonderful,” he said upon receipt of a personal letter from the French ambassador to Ireland, Jean-Pierre Thébault, stating he  will be honoured for his “significant personal contribution in the defence of freedom of France”.

“That’s a very high honour. I can’t believe it,” he said.

“Sir Jack”, as he is popularly known, was born in New York in 1916, and travelled to Ireland with his parents when he was three years old.

They settled in the 19th century Castle Leslie, home of the Leslies since the 1600s. Their ancestry can be traced back to Attila the Hun and Winston Churchill.

Sir Jack served with the Irish Guards at Buckingham Palace and Windsor Palace before being called to fight in France in 1940, where he was captured and spent five years in prisoner of war camps in Germany. He was released in 1945, after he risked his life to save his men.

In the early 1950s, he went to live in Rome where he bought a 1,500-year-old monastery called the Badia di San Sebastiano di Alatri. He returned to retire in Castle Leslie at age 78 in 1994.

Sir Jack discovered a passion for dance music and celebrated his 85th birthday in Manumission at Privilege, the world’s biggest nightclub in Ibiza. “They asked me on stage and I had to dance in front of 10,000 people. It was amazing. I love boom boom music.”

He rose to global notoriety when he unwittingly announced the wedding plans of Sir Paul McCartney and Heather Mills to the world’s media outside Castle Leslie in 2002. “They’re getting married on Tuesday, but it’s a secret,” he said.

In 2008, he wrote a book chronicling his many adventures called Never a Dull Moment.

“You can read all about my life in the book. It got lots of old photographs in it that I had under my bed. I’ve been lucky enough to have had many lives,” he said.

“I’m currently in the pre-production phase for a film I’ve been working on for three years. It’s a post apocalyptic Gothic horror road movie with a lot of special effects… It’s going to be shot here at Dunsany Castle so it will be fun,” he said.

“I can trace my lineage to Saint Oliver Plunkett, a 17th century Roman Catholic archbishop who was hanged, drawn and quartered, and Horace Plunkett, cofounder of the Irish agricultural cooperative movement,” he said.

The Plunketts were Anglo-Normans who arrived in Ireland in the 12th century. The barony of Dunsany is one of the oldest Irish titles, created in 1439 under Henry VI.

Plunkett lives in Dunsany year round with his mother, Lady Dunsany, who oversaw a major refurbishment of the castle, turning the ground floor into a gallery of her late husband’s work.

“It’s a beautiful castle but it’s a lot of work. People don’t see that. We’re just caretakers looking after it for the next generation.”

The 7th Earl of Rosse, Brendan Parsons, lives in Birr Castle Demesne. “The castle you can see now is an extension of something that was built by the Normans in 1170. Our family arrived on these shores in 1620.

“We have been interested in many different things over the generations – science, architecture, building, astronomy and gardening to name but a few.”

In 1840, the 3rd Earl of Rosse built the largest telescope in the world, which was 1.8m in size and weighed three tonnes.

The current Earl of Rosse is an expert on plant life and travels around the world to pick up rare plants for the gardens. “The garden contains over 4,000 plants from 40 countries, including some very rare plants.”

After being educated at Eton, he became an officer in the Irish military, spending time in Egypt, Jordan and briefly joining the Arab Legion. He studied in Oxford where he met his wife, Alison, with whom he has three children. Throughout the 1960s and ’70s he worked for the UN serving in Algeria, New York, West Africa, and Iran.

Birr Castle also boasts a long history of photography. Mary Rosse, who was born in 1813, was the earliest acclaimed female photographer in the world. Her dark room is still preserved in the castle.

“The glorious thing about Kilruddery House and Gardens is the fact that three generations of the family get to live here,” said Anthony Jacques Brabazon, Lord Ardee, who was born in 1977.

He shares the estate with his wife Fionnuala, his four children, and his parents, the Earl and Countess of Meath.

“The house that currently stands on the sight was built in the 1900s, but the Brabazon family have been here since 1618,” he said.

The first Brabazon to arrive on Irish shores was Sir William Brabazon of Leicester, who was sent to Ireland by Henry VIII in 1534 to serve as vice treasurer.

Surrounded by world-famous gardens, which were designed in 1682 by the Frenchman who also laid out the gardens at Versailles, the current house was built in 1820 on a site where the previous house had been destroyed by fire. It is hailed as one of the greatest and most significant Elizabethan revival mansions in Ireland.

Anthony and Fionnuala took over the daily running of Kilruddery House and its estate in 2004 after they were married. They manage the farm, the famous tearoom, a renowned music and arts festival, a farmers’ market, and more.

“Its hard not to fall in love with the place when you come here. It’s stunning. Each season brings something wonderful with it and we are very honoured to be a part of it. Even though we get so many people coming in and out, and we have such a great historical legacy, its still a home – and that’s fantastic,” Fionnuala said. 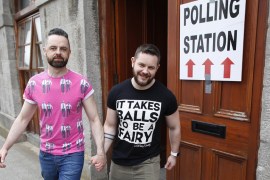 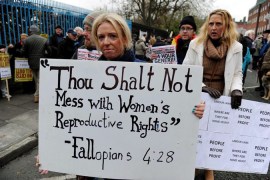 Court allows hospital to switch off life support for brain-dead woman as her unborn foetus has no chance of survival. 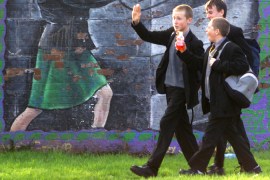 Historically, few Protestants have learned how to speak Irish Gaelic – but that may be starting to change.