Perth, Australia – Shaun Harris watched the lawyers and court officials gathered together outside Court 51 on level five of the Central Law Courts in Perth. For the last 14 months, he travelled 30,000km around Australia to work for this moment.

“All these people,” he said with a pause, “here for my niece.”

On August 4, 2014, his niece Dhu died while being held in police custody in Port Hedland, an iron-ore mining town about 1,600km north of Australia’s main western city of Perth.

Dhu’s uncle Harris was the public spokesman for the family as they waited more than a year to find out the circumstances of how the 22-year-old Yamatji Aboriginal woman died from severe staphylococcal septicaemia and pneumonia, developed as a result of complications from a broken rib.

Two days prior to her death, she was arrested on a warrant for $3,600 in unpaid fines relating to seven offences, including assaulting a police officer. She was taken into custody at the South Hedland Police Station.

On the first night in lockup, Dhu began to complain about severe pain in her right side. CCTV footage played for the court at the start of the inquest on November 23, showed her moaning in pain for an hour before she was taken to hospital.

Evidence given at the inquest suggests police believed Dhu was “faking” her pain.

When Dhu later arrived at South Hedland Health Campus, she was considered low-priority. She was seen by Dr Anne Lang, who failed to make a diagnosis. Instead, Lang wrote “behavioural issues” in her brief notes as the cause of the health problem, and Dhu returned with police to her jail cell.

The next night when Dhu returned to the hospital, she was seen by Dr Vafa Naderi, who again attributed the severity of her pain to “behavioural issues”. Again, no formal diagnosis was made.

Finally, on August 4, Dhu awoke in the final stages of severe septic shock. CCTV footage showed her being handcuffed, dragged to the door of her cell, and carried by police to the back of a police vehicle.

An hour later, she was declared dead.

“In the end she died because she was a black woman, which is one of the worst things to be in this country,” Harris told Al Jazeera.

Sandra Thompson, an expert on indigenous people’s health, told the court that Dhu would have gotten better care had she been “a white, middle class woman”.
But Dr Ganesan Sakarapani, the senior medical officer at South Hedland Health Campus, strongly denied the accusation. “I would categorically reject that,” he said. “We do not have a culture of institutional racism at our hospital.”

Ros Weatherall, a Western Australia police spokesperson, told Al Jazeera the department was not at liberty to discuss a matter before the court.

It was a rough week for Dhu’s family, who were already struggling with the “lonely” wait between her death and the inquest’s start.

Such delays are not unusual in Western Australia state. Eight other families are currently waiting for their own inquests, some for more than three years.

Dhu’s inquest was only brought forward by a public campaign that made her death the most high-profile Aboriginal death in police custody since Ward, an Aboriginal elder, was “cooked to death” in the back of a police vehicle in 2008.

Deaths in custody of indigenous Australians has been an ongoing issue since the 1980s and is broadly comparable to the Black Lives Matter movement in the United States.

For many, the death and final days of Dhu have touched upon every issue currently facing Western Australia’s Aboriginal people.

This explosion in numbers has been the result of several controversial policies by the Western Australian government, such as the state’s “three strikes” laws for home burglaries and the policy of allowing those with unpaid fines to pay them off at a rate of $250 a day by serving time.

Statistics collected by the Western Australia Labor Party show the number of Aboriginal women arrested for defaulting on a fine has increased 576 percent since 2008.

In addition, young Aboriginal people in the state are being introduced to the prison system in larger numbers, with those aged 10 to 17 53 times more likely to end up in police custody than their non-Aboriginal peers. This is twice the national average.

Combined with Western Australia government’s push to close remote Aboriginal communities and other policies that have slashed funding for Aboriginal-specific health services, there are fears the rate of imprisonment – and the number of deaths – will grow further.

If it does, many more may find themselves in the same position as Dhu’s family who spent last week sitting through an emotionally difficult court process as medical staff from the South Hedland Health Campus testified on her treatment.

The court ruled that 10 involved police officers scheduled to testify last week would instead appear in March 2016.

The news was too much for Harris, who walked out of court and told Al Jazeera the delay was a “betrayal”.

“By March the police are going to be testifying that they ‘don’t recall’. We’ve already heard it all this week and it’s been 14 months. Imagine four more months? It’s a massive insult to the family after what they’ve done to [Dhu].”

Dhu’s grandmother, Carol Roe, broke down during the testimony from Dr Naderi and left the courtroom in tears.

For the woman who had raised Dhu, the proceedings were just too much. “I just want to go home,” Roe said. 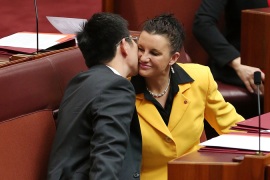 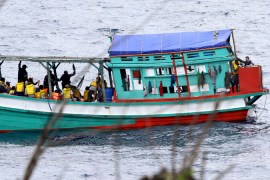 Authorities offer payments of up to AU$10,000 for asylum seekers to drop their bids for refugee status.